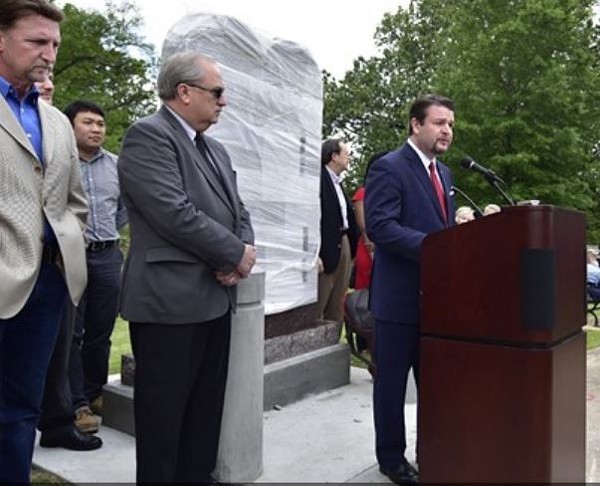 It being Sunday it’s a good day to catch up with Bro. Jason Rapert. A reader notes that he’s still raising money through the American Faith and Heritage Foundation he started though it’s already raised more than enough to pay for two versions of a 10 Commandments monument at the state Capitol, including added security after the first was knocked down.

From the group’s page:

The Arkansas Ten Commandments Monument is under assault from the Satanic Temple, Satanists, the American Atheists and the ACLU. They are raising money to oppose our efforts to honor the historical and moral foundation of law. We thought that after they destroyed the first monument that the second monument would be safe. Well, the legal assaults have begun and they continue to come against the good people of Arkansas and the American History & Heritage Foundation.

First a correction for Bro. Rapert: Neither the Satanic Temple, Satanists, Atheists or the ACLU knocked down the first slab. It was a Dodge Dart driven by a professed Christian named  Michael T. Reed who’d also knocked down a similar — and unconstitutional — monument in Oklahoma. But it is true that the Arkansas monument is being challenged in court. There, the attorney general and secretary of state are providing legal defense and they have been joined by the First Liberty Institute, which works to inject religion in public life.

I asked Rapert on Twitter today for an accounting of the money raised and spent for his History and Heritage Foundation, which he contends is all about the foundation of law and not about religion, despite memorializing religious teachings and despite such trappings as the group’s own Facebook page.

The group promotes efforts to post In God We Trust signs in public schools. But that’s not all, informed me when I asked for financial figures on his religious monument:

You mean the monument to honor the historical & moral foundation of law? The Ten Commandments Monument we have just like Texas, Arizona, Colorado & Missouri? That was just the first monument – we have MANY more planned as promised. You can donate here: https://t.co/eW0AkzXGFc pic.twitter.com/WcvH3WMkws

Indeed, fund-raising continues on Go Fund Me though the amount raised is well in excess of what’s been spent in Arkansas. That particular link doesn’t provide information that more monuments are planned.  Nor would he answer my question about finances of the group, which is registered as a nonprofit with the state, but has no records on file with the IRS as a 501c3 nonprofit.

Rapert DOES have a 501c3 nonprofit, his Holy Ghost Ministries, another organization for which he’s resisted an accounting beyond that required on tax filings.

Just this week, Rapert’s “murky” finances drew attention in an article on Patheos, a website that covers religious topics.  It notes Rapert’s multiple fund-raising organizations, the excess fund-raising for the monument, the lack of information about monument financing and lack of disclosure about where that money went. It noted, too, a sudden surge in income for Holy Ghost Ministries in 2016. The article raises the question of whether Rapert’s ministry had somehow benefitted from his efforts on behalf of the monument. Who knows? But it’s certainly kept his name in the news.

Rapert loves publicity, even the bad kind because he’s always played the victim card with relish.

Saturday night, during a round of serious speeches, the Arkansas Democratic Party had a little entertainment from a video asking several people who the worst Republican — Donald Trump or Jason Rapert. Rapert won. All politics is local. Some didn’t think Trump was really a Republican, just a Trumpian.

Rapert and other Republicans clutched their pearls all over social media. “Childish,” sniffed Sen. Jim Hendren. Who can blame them? The Republican Party has never made fun of a sitting president or , being real serious and all. Some of them HAVE stolen state money to benefit a religious college and none of them has yet made a move to get the money back, but well I guess it’s just childish to bring that up. Or unpaid labor, to mention another serious topic Hendren doesn’t like to talk about.

Sad to see the AR Democrat Party so void of ideas that they spend their time playing hateful, childish games rather than offering serious solutions to problems. https://t.co/FYAkA9b1j1

As it happens, Rapert wore the prize with honor. It gave him a shot to pass another one of his collection plates.

Not sure if this is true – but if it is. I am so honored the @ArkDems have voted me the “worst” (translated BEST) Republican! Proud to have stood with @realDonaldTrump @VP and my @ARGOP colleagues to make #ARKANSAS & America great again! DONATE at https://t.co/axSOuzHNGI #WINNING https://t.co/2VQUW30wI1