The Satanic Temple is bringing its 8.5-foot Baphomet statue to the Capitol from 1 to 3 p.m. today to rally for religious pluralism and stand as an objection to the state’s endorsement of religion through of the 10 Commandments monument backed by Sen. Jason Rapert. Rapert is perturbed.

For your enlightenment, the announcement from the Satanic Temple, which includes news on several Christian speakers who live in Arkansas, and then Rapert’s response distributed this morning distributed by the taxpayer-funded Senate Information Office.

From the Satanic Temple:

SALEM, Mass. – August 16th, 2018 – Hundreds have announced they plan to attend the “Satanic Temple’s Rally for the First Amendment” at the Arkansas State Capitol on August 16th. The rally, from 1pm – 3pm, will include The Satanic Temple’s infamous Baphomet statue to the State Capitol to support the First Amendment and religious plurality. The event will bring local supporters as well as those from around the country.

The Arkansas legislature approved the placement of a Ten Commandments monument on government property and after they refused to consider accepting a donation from The Satanic Temple, they filed suit to have their statue of Baphomet placed on the same grounds

The rally will include five speakers including Lucien Greaves, the Satanic Temple’s spokesperson and co-founder, as well as Tonya Hardwick, Chad Jones, Sadie Satanas, and Leewood Thomas.

“The event is intended to be an inclusive gathering where The Satanic Temple will be celebrating pluralism along with Christian and secular speakers. People of many faiths will come together at the Capitol to reject the Arkansas State Legislature’s efforts to privilege one religion over others,” explains Lucien Greaves, spokesman and co-founder of The Satanic Temple.

Lucien Greaves is the spokesman and co-founder of The Satanic Temple. Greaves has provided commentary on social issues in numerous media appearances, including MSNBC, NPR, CNN, Time Magazine and Rolling Stone. In addition, he has spoken on the topics of Satanism, Secularism and The Satanic Temple at Universities throughout the United States.

Tonya Hartwick Burt is a resident of Guy, Arkansas and will be graduating from Colorado Christian University in December with a degree in Criminal Justice. She is a true example of the resurrection power of Christ Jesus. She was dead in her sins and now experiences freedom in Christ. She serves as Auxiliary member alongside her husband in Gideon Internationals.

Chad Jones is a Conway-based minister with Arkansas Progressive Christians (APC). APC is a Christian organization that seeks to show Christ’s love to all people. APC fights back against bigotry, prejudice and discrimination that may occur in the name of the Christian faith.

Sadie Satanas is current Co-Chapter Head of the Satanic Temple Santa Cruz, TST’s sole California chapter. As a transgender female, activist and sex worker, she is committed to the quest for religious pluralism and equality in our country. Sadie strongly believes all faiths deserve equal footing in the United States and is dedicated to fighting for the rights of others as well as her own.

Leewood Thomas was a founding member of the Arkansas Society of Freethinkers (ASF) and served as its first Vice-President in the mid 1990’s. Lewood served as media liaison for ASF for many years. More recently, he founded the Saline Atheist & Skeptic Society which has applied for its own “Wall of Separation” monument for the Capitol grounds not long after the 10 Commandments bill passed.

You can learn more about the campaign and help support The Satanic Temple by donating to their fundraiser at www.thesatanictemple.com.

About The Satanic Temple

The Satanic Temple is a non-theistic religious organization dedicated to Satanic practice and the promotion of Satanic rights. The Temple understands the Satanic figure as a symbol of man’s inherent nature, representative of the eternal rebel, enlightened inquiry and personal freedom rather than a supernatural deity or being. The mission of The Satanic Temple is to encourage benevolence and empathy among all people, reject tyrannical authority, advocate practical common sense and justice, and be directed by the human conscience to undertake noble pursuits guided by the individual will. For more information about The Satanic Temple, please visit http://www.thesatanictemple.com. 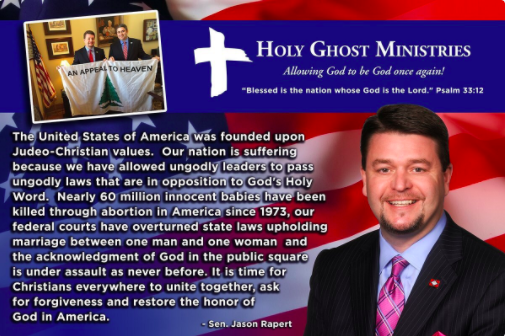 The United States Constitution guarantees the rights of all American citizens to express their political opinions, to peacefully assemble and to petition their government. The first amendment in our Bill of Rights states specifically that Congress shall make no law respecting an establishment of religion, or prohibiting the free exercise thereof; or abridging the freedom of speech, or of the press; or the right of the people peaceably to assemble, and to petition the Government for a redress of grievances. I hold these rights very dear personally and will always defend the rights of American citizens even when we may disagree.

The essential right to freedom of speech also ensures that the voice of the people of Arkansas and our great state may be heard as well. Though our state is being visited today by outsiders who clearly choose to travel around the nation uplifting the profane and proclaiming extremely unorthodox views, rest assured that though we respect their right to free speech, they must also respect our right to disagree with them and repudiate their false claims.

The Constitution also protects the rights of the people to elect legislators to govern on their behalf, with their consent. The legislature carried out the will of the citizens of Arkansas when it overwhelmingly approved Act 1231 of 2015. State legislators responded to the will of Arkansans by passing the Arkansas Ten Commandments Monument Act and our Governor signed the bill into law. I have confidence in the Arkansas Attorney General to successfully defend the law in state and federal courts.

Due process was followed to the letter of the law when the Secretary of State and the Capitol Arts and Grounds Commission held a series of open and public meetings to gather input on the placing of the Ten Commandments monument. The process allowed citizens to participate in the implementation of Act 1231. The extremist group that has targeted our state again today came and spoke against the monument during our public meetings and sought for a sponsor of a bill to erect their profane statue – they never had any takers. The process was open and they failed to convince any of the 135 legislators to sponsor a bill to carry out their idea.

Our rights to build a monument were exercised through the electoral and legislative processes and have been upheld by the judicial system. They are no less sacred than the freedoms of a shrill few, for whom legal and political rights are merely methods to fleece the gullible and entertain the cynical.

No matter what these extremists may claim, it will be a very cold day in hell before an offensive statue will be forced upon us to be permanently erected on the grounds of the Arkansas State Capitol. Our Supreme Court ruled in the 2009 U.S. Supreme Court decision Pleasant Grove v. Summum that no group can force a government body to do such a thing.

I pledge to all Arkansans that we will defend the will of the Arkansas people and the honor of our great state. It was my honor to sponsor the bill which led to passage of the Arkansas Ten Commandments Monument Act and I hope to help every state in our nation do the same if they wish to do so.

A lawsuit is pending to force of the Rapert statuary. I’ll leave it to the federal judge to point out some flaws in the case he’s made here.