Supreme Court nominee Brett Kavanaugh, who worked as an associate counsel for independent counsel Ken Starr during the investigation into President Bill Clinton, suggested in a 1998 memo that Starr pursue an explicit line of questioning into the president.

In the memo, acquired from the National Archives by the Washington Post via a Freedom of Information Act request and published today, Kavanaugh wrote that after reflecting on it over the evening, he strongly advised that Starr go on the attack in questioning the president, with a focus on highly specific and explicit interrogations — “piece by painful piece” — including multiple queries clarifying precisely where the ejaculate landed. “The idea of going easy on him is … abhorrent to me,” Kavanaugh wrote.

“I have tried hard to bend over backwards and to be fair to him,” Kavanaugh lamented, before getting on to the business of who bent over backwards.

Kavanaugh, an enthusiastic basketball player and curious cat, suggested the following questions (“I leave the best phrasing to others,” he added): 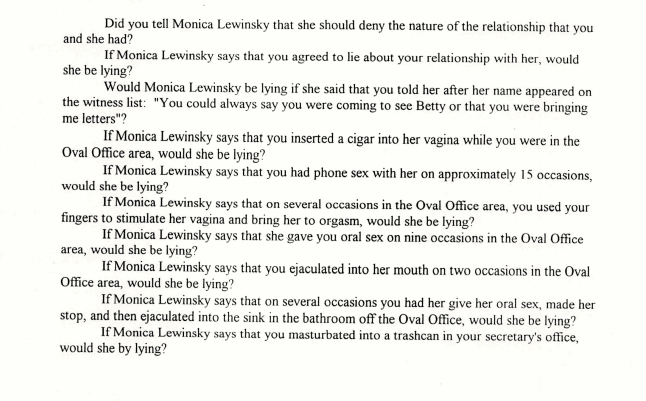