Led by evangelicals such as Sen. Bart  Hester and Rep. Jim Dotson, Arkansas joined a couple dozen other states in adopting a law in 2017 that prohibits the states from doing business with those who “boycott Israel.” A federal judge in Kansas has enjoined the law there and just recently the Texas Observer reported on the discovery by many people in Texas that the law forces people to choose between employment and free speech in contracting to serve Texas school districts.

As a result of the law in Texas, many school districts are including a no-boycott provision in contracts with even a part-time judge for high school debate tournaments.

Obi Dennar was shocked. As a college student, he had been involved with the Palestine Solidarity Committee, a long-standing pro-Palestine group at UT that’s active in the broader “boycott, divest, sanction” (BDS) movement that seeks to economically pressure Israel through public campaigns. Dennar recalled that a school official told him and the other judges that any discrepancies in the contract could result in legal consequences.

“I thought ‘wow,’ I can’t sign this because even if they were just to Google my name they will be able to find that I’ve been a part of groups that advocate for Palestinian rights,” Dennar said. Rather than put himself at legal risk or violate his conscience he decided not to sign the contract, forfeiting the $150 he was owed. “It’s pretty frustrating given that I’m in college and every dollar matters. I find that it’s very suspicious, but also very wrong.”

Of it’s wrong. But legislators like Hester, Rapert, etc. believe in the 1st Amendment only insofar as it protects THEIR political point of view (discrimination against gay people, for example.)

A lawsuit similar to the one filed in Kansas should be possible in Arkansas, with a similar result. All that’s needed is a plaintiff being forced to sign such a contract who’d like to object.  Anybody checked their contracts lately? Care to stand up against the state in the name of the 1st Amendment? It’s not easy when your livelihood is at risk.

The ACLU won a preliminary injunction against the Kansas law in January. The lawsuit proceeds. But an injunction indicates the judge’s belief that the ACLU will prevail on the merits.

Arkansas Act 710 contains all the boilerplate of the pro-Israel legislation. It prohibits doing business with or investing in companies that boycott Israel. It specifically includes universities and they have taken notice. UA is sending the notice below to contractors. A Fort Smith business complained earlier to the Times Record about being forced to sign such an agreement to bid on work through the State Building Services Division. 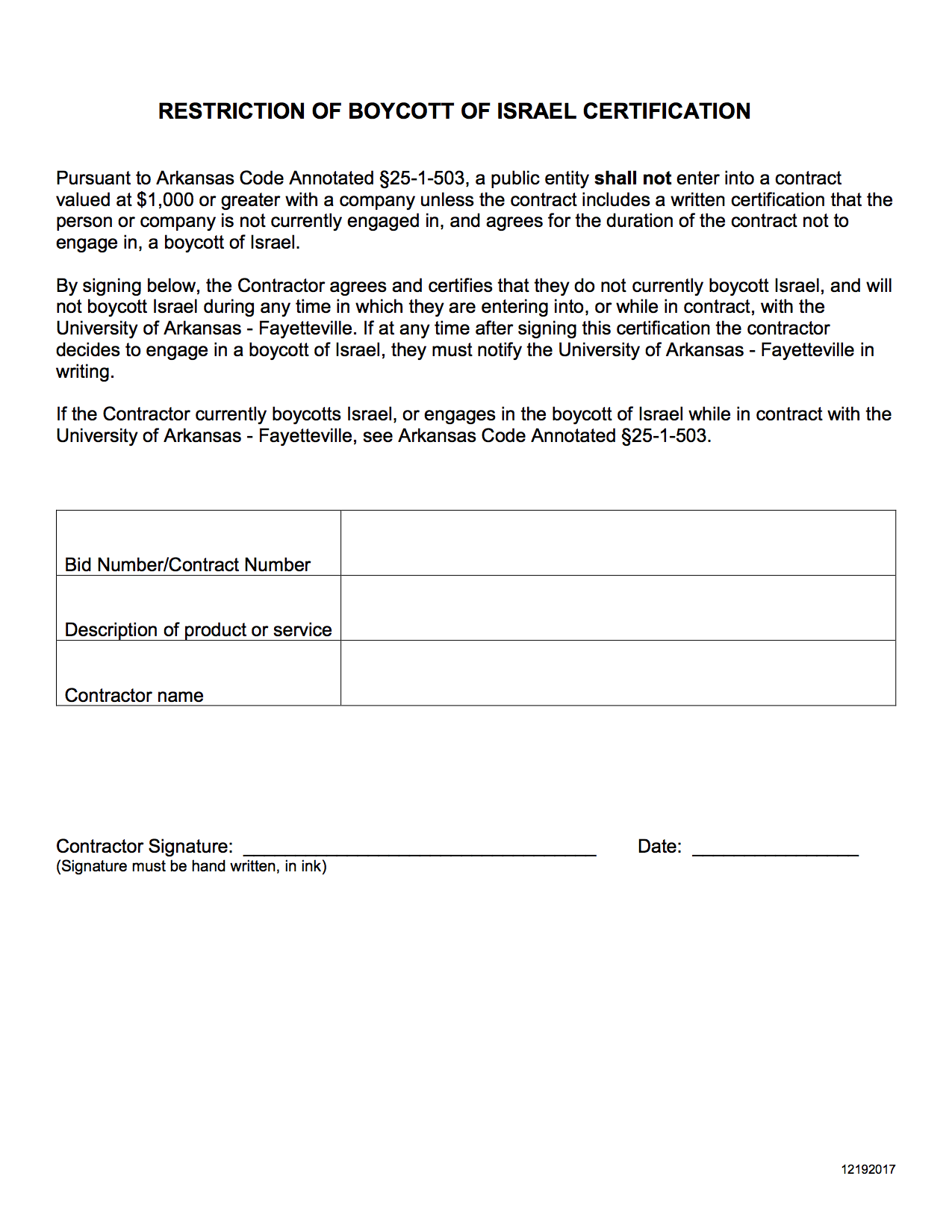