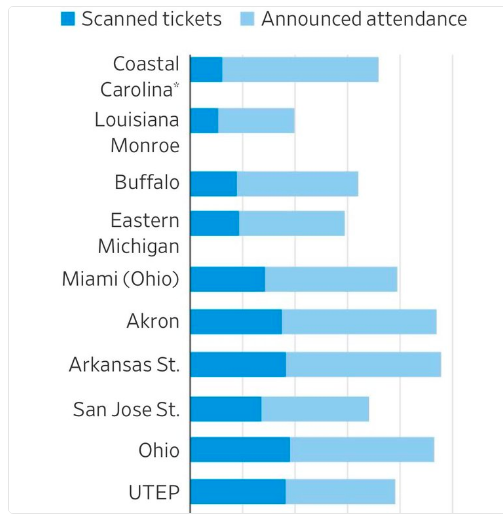 The story is behind a , but David Bazzel noted on Twitter that the article said  UA actual home attendance was 58 percent of the number of tickets scanned. A Journal chart also showed inflated attendance at ASU. A snippet from the article:

The phenomenon has been noted  and chronicled with photos of stadiums showing many empty seats despite high announced attendance counts.

Deadspin explained how the were derived.

The WSJ sent records requests to “nearly 100” public universities with football programs to uncover the actual count of scanned tickets from last year’s football season, then compared those responses with the “official” juiced numbers. With the exception of Navy, every school who reported back exaggerated their paid attendance at least a little bit. The most egregious offender found, by percentage, was Coastal Carolina. The Chanticleers played six games in the newly renovated 15,000-capacity Brooks Stadium in 2017, but only scanned a full-season total of 15,248 tickets last season despite announcing an official season attendance of 89,754.

Is it too much to ask institutions of higher education to give accurate attendance counts? Or at least stop announcing bogus counts? Perhaps it’s time for standing FOI requests football game attendance.