Dueling photo today in the race for governor. Gov. Asa Hutchinson had a photo opp today to tout results of a legislative housecleaning bill to strip agency rulebooks of outdated rules. His Democratic opponent, Jared Henderson, put on display points of his public ethics package. 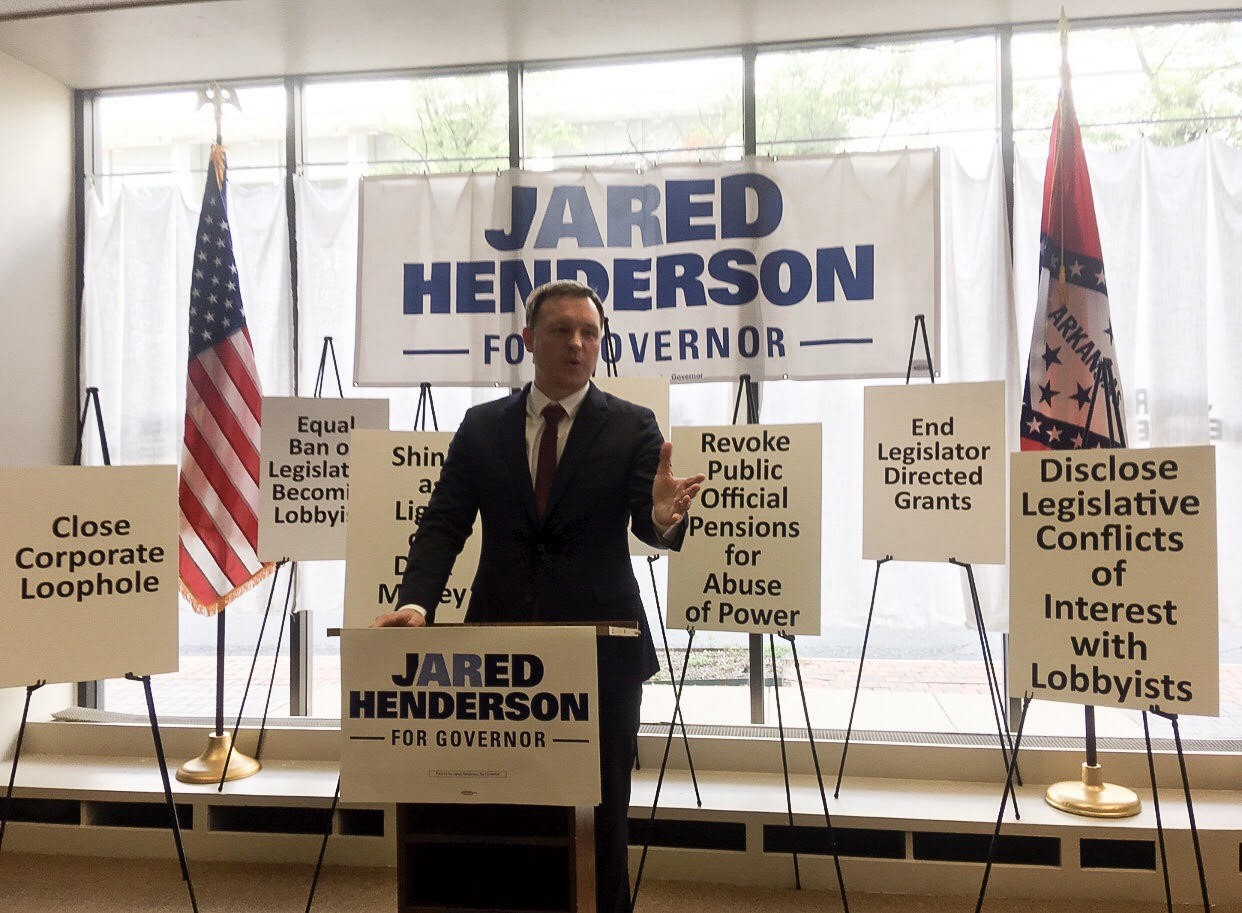 Hutchinson’s news release said this would reduce bureaucratic red tape. In fact, it will be mostly meaningless to citizens. It’s primarily an editing of rules no longer enforced or for agencies no longer in existence.

The state Racing Commission no longer has a rule that says racing fans should not be obnoxious in the stands.

The governor says the rules have been pared by about 25 percent after a review of some 3,400 rules and regulations.

A contrary thought: Could all of that staff time put to a more productive use?

Certainly, Henderson’s ethics ideas, several of which he’s mentioned before, would be more immediately productive in Arkansas government. With six former legislators, including the governor’s nephew, indicted and numerous others enmeshed in smelly activities, I’d say we need better ethics laws more than rulebook editing.

On Friday, Senator Hutchinson was indicted on 8 counts of wire fraud and 4 counts of filing false tax returns. Today, Senator Jon Woods was sentenced to more than 18 years in prison. Meanwhile, taxpayers are paying the salary for Representative Mickey Gates when Gates has evaded taxes for more than a decade,” Henderson said. “Arkansans have had enough. As more and more corruption continues to surface, voters are only left with more questions and no answers from our governor.”

“Seven legislators from both parties have either been convicted or indicted and while it may not be the governor’s fault that this happened, it is his responsibility to address the culture of corruption in our state capitol and he has failed to clean up this mess,” Henderson added.

“Asa Hutchinson shrugs his shoulders and says this is a ‘people problem,’ but strong leadership instead demands processes be in place to hold elected officials accountable and make state government more transparent from the beginning. Arkansas taxpayers deserve to know our state’s leadership takes seriously the money and influence they entrust our elected officials to use wisely, which is why I have released a comprehensive plan on ethics reform that details ways we can root out corruption.”

1) Revoke Public Official Pensions for Abuse of Power: Right now, “unlawful killing” is the only crime that constitutes revocation of a public servant’s state pensions. If a public official, including a legislator, commits any crime relating to abuse of power, their pension should be revoked. Many in the Arkansas legislature have turned a blind eye to corruption in order to maintain the status quo and protect those in power, including themselves, but it’s time serious ramifications are enforced for those abusing the powers of public service.

2) Strengthen Arkansas Ethics Commission: The Arkansas Ethics Commission is under-resourced and lacks significant ability to address abuse of power by candidates or elected officials. The Commission requires additional capacity to respond immediately and thoroughly to ethics complaints and alleged violations, as well as strictly enforce campaign finance disclosure laws. Arkansans should know our state has a culture that stands for honesty and integrity in our government.

4) Close Corporate Loophole: Corporations are currently prohibited from making contributions directly to candidates. However, they can contribute to PACs, which then funnel money towards candidates. We must close this loophole to prohibit businesses from contributing to PACs.

5) Shine a Light on Dark Money: Throughout several Arkansas judicial races, millions of dollars in dark, outside money from unknown sources were spent to influence electoral outcomes. Arkansas must bring the power of elections back to the people. Any organization engaging in any political activity, including political television ads, must fully disclose who its donors are and have that information publicly available online.

6) End Legislator-Directed Grants: When we use Arkansas’s money, taxpayers should trust that money is being put to good and honest use. In 2017, the Arkansas Supreme Court reinforced that the purpose of any allocated money must be distinctly stated in a bill. However, in recent years voters have seen legislators allocating money to fit their own personal gain, not to fit the needs of Arkansas.

This could be done by amending the existing code of ethics [Arkansas Code Annotated § 21-8-304] to add a new section stating that no member or group of individuals of the General Assembly can designate the ultimate recipient of public funds previously appropriated by the General Assembly to the various executive agencies or other entities with power to expend the appropriated funds.

Governor Hutchinson may say that GIF is done, but the block grant idea he has floated has not committed to a proposal to end individual legislators’ ability to designate grant recipients. He should make that commitment now. Let’s remember that over time the legislature has adopted three versions of the General Improvement Fund, all of which were challenged in court.

7) Disclose Legislative Conflicts of Interest with Lobbyists: Every piece of legislation our lawmakers introduce should be for the purpose of benefiting Arkansans, not legislators or their friends.

That is why, in light of recent scandals involving bribery of legislators by lobbyists, lawmakers should amend the Arkansas code on conflicts of interests of legislators [Ark. Code Ann. § 21-8-803] to require legislators to disclose and itemize during each week of a legislative session all employment or professional services and compensation they have currently or have had in the previous year with registered lobbyists or firms that employ registered lobbyists.

We cannot rely on lobbyists to disclose the employment or service agreements they have with legislators, and statements of financial interest filed annually by legislators don’t adequately disclose those relationships with lobbyists and the firms that employ lobbyists.

When complying with my proposal, a legislator will ask, in writing, each person or business they work for currently and have worked for in the previous year if the person or business is a registered lobbyist or employs a lobbyist. The legislator will make disclosures as necessary based on written answers provided, with the disclosures to itemize each lobbyist and the business that employs the lobbyist along with the amount of compensation received.