Mike Pence will appear at a campaign rally for Republican U.S. Rep. French Hill today in Little Rock and the campaign is monitoring carefully who’ll be allowed to attend or cover the event. He’s expecting about 1,200 of the right sort of people. 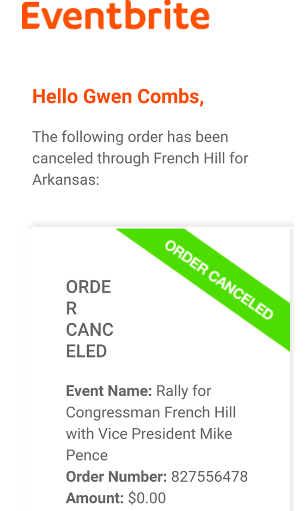 The Hill campaign does not send press releases to the Arkansas Times, which has been critical editorially of Hill. But a notice sent to other media said:

Credentials are limited, and not all requests will be granted. A valid email address must be registered with your appropriate media outlet.

Using an email not associated with your outlet may cause a delay.
French Hill for Arkansas reserves the right to deny credentials.

This follows a pattern set by, among others, U.S. Sen. Tom Cotton. There is no 1st Amendment claim on campaign access, but Hill and Cotton both also refuse routine press services of their taxpayer-financed offices to the Arkansas Times.

Hill carefully selects forums for exposure  — whether on broadcast media or business and civic audiences unlikely to hold unfriendly voices.

The rally begins at 4:45 p.m. at the Statehouse Convention Center. I hope Bush-era “free speech zone” rules aren’t enforced by the Secret Service. Given Hill’s animosity, they might try to remove Arkansas Times workers from our observation perch across the street.

Speaking on the steps of the Arkansas State Capitol Thursday, Democratic challenger for Arkansas’s 2nd Congressional District Clarke Tucker asked his opponent, Congressman French Hill, to join him in denouncing the recent third party mailers that are explicitly racist and politicize the tragic 2015 death of Kate Steinle in California. The Republican Majority Fund has repeatedly sent mailers that use racial undertones and misleading statements on Tucker to Arkansas voters and last week sent the mailer with Kate Steinle’s photo.

“Congressman Hill and his Washington allies are distracting from his record of not delivering for Arkansas with these reprehensible, indecent mail pieces,” Tucker said. “I ask this PAC to respect the request of Kate Steinle’s family and not use her tragic death for political purposes, and I’m asking Congressman Hill to join me in denouncing these racist, fear-mongering mail pieces because they are the wrong kind of politics for Arkansas and for our country.”

Tucker also criticized Hill for skipping a debate last night, instead choosing to attend a closed-door fundraiser for his campaign.

“It says a lot about Congressman Hill’s record that he didn’t show up to debate last night,” Tucker said. “It says even more about his priorities that he chose a closed-door fundraiser over answering questions from voters across this district. If you are running for elected office, you should be accountable and accessible to the people you are asking to represent, and that is exactly what we’re doing in this race and what I will do in Congress.”