Surprise. Former Whitewater persecutor Kenneth Starr’s new book trashes Bill and Hillary Clinton, as the Democrat-Gazette made clear this morning. You’d think Starr was some moral exemplar as he whines about his “persona non grata” status in Arkansas.

The Democrat-Gazette lacked a pithy comment from the Clintons’ lawyer, David Kendall, which seems apt. He said last week:

“The American people saw through Starr’s obsessive pursuit of President Clinton and will see through his attempt to rewrite history to vindicate his own sullied reputation.”

The Whitewater investigation dragged on for seven years, most of it under Starr’s direction. It came up empty on all the reasons for its but claimed a victory in its final thanks to the perjury trap engineered over Bill Clinton’s Oval Office affair with Monica Lewinsky.

The soberest, most detailed account of the Whitewater investigation, by Duquesne law professor Ken Gormley, illustrates that Starr was an inept prosecutor who indulged in excesses. A third investigation of the Vince Foster suicide was only one of the excesses Harassment of high school students and a search for pillow talk also come to mind. Bullying of people before grand juries was another. There was a reason he wasn’t beloved in Arkansas.

Starr also was surrounded by people like Brett Kavanaugh, who doggedly fueled the Foster murder conspiracy and wrote an X-rated series of questions for Bill Clinton along with the pornographic Starr report that helped Clinton survive impeachment. His sex obsession then seems suddenly relevant this week.

But that is only the beginning of Starr’s lack of credentials for pronouncing who is honest and who is not. More recently, he lost his job as president of Baylor University for his handling of a massive athletic department sex scandal. Winning games seemed to be more important than students reporting rape.

Monica Lewinsky wrote recently about a chance encounter with Starr in a restaurant.

Ken Starr asked me several times if I was “doing O.K.” A stranger might have surmised from his tone that he had actually worried about me over the years. His demeanor, almost pastoral, was somewhere between avuncular and creepy. He kept touching my arm and elbow, which made me uncomfortable.

I turned and introduced him to my family. Bizarre as it may sound, I felt determined, then and there, to remind him that, 20 years before, he and his team of prosecutors hadn’t hounded and terrorized just me but also my family—threatening to prosecute my mom (if she didn’t disclose the private confidences I had shared with her), hinting that they would investigate my dad’s medical practice, and even deposing my aunt, with whom I was eating dinner that night. And all because the Man in the Hat, standing in front of me, had decided that a frightened young woman could be useful in his larger case against the president of the United States

Starr and his book, “Contempt: A Memoir of the Clinton Investigation,” deserve the view he holds for the Clintons, Webb Hubbell, Jim Guy Tucker, Judge Henry Woods, Susan McDougal and others who pushed back against his Javert-like pursuit of the Clintons (and, he now freely admits, a Supreme Court seat.)

Also: Long before accusations of sexual assault came along, Kavanaugh’s time with Starr alone was enough to disqualify him as a Supreme Court candidate.

Starr’s book apparently speaks kindly of Arkansans in a general way. Hoping to sell some books, I guess. I wish you could have seen the look on his face when he stepped into an elevator in a San Francisco hotel a few years ago and found the only other person in the car was me. But, as with Lewinsky, he recouped and smiled for my cell phone camera (above). I wish I’d had a souvenir fan to hand him. 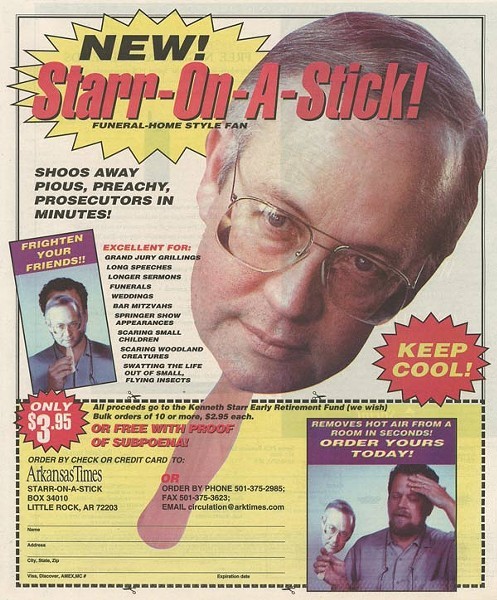