Bontiea Goss, the former chief operating officer of scandal-ridden Preferred Family Healthcare, has written a letter to the editor of a Springfield, Mo., publication complaining that coverage of the case has resulted in work by the agency “clouded by sensational headlines that leave enormous gaps, which can only be filled by knowing the full narrative behind our commitment to those we served and employed.”

Goss didn’t fill in any of those details in the letter to the Springfield Business Journal. She and her husband, Tom Goss, former chief financial officer, were placed on administrative leave in 2017 and fired outright in January after the beginning of a series of indictments and guilty pleas involving top officers, employees,  former lobbyists and a former accountant of the health provider, along with convictions of four Arkansas legislators. Several other legislators and employees of PFH affiliates have been implicated as well.

The Gosses have not been charged with a crime, but various federal documents have implicated them in activities including kickbacks and illegal campaign contributions to legislators and high living on money generated by the agency, which has been paid hundreds of millions in five states through a variety of federally supported programs, particularly Medicaid.

The Gosses have not talked with Arkansas reporters since the scandal began unfolding. It has led to the end of PFH operations in after Medicaid payments were suspended. A deal has been struck to sell PFH assets to another nonprofit operator.

Goss wrote in response to an article about the recent guilty plea by a PFH’s top clinic officer, Keith Noble. She wrote:

While I am restricted as to my ability to respond to Keith Noble’s plea, I would ask that you consider the following. The facts behind all of the work we did in supporting the health care organization we founded have been clouded by sensational headlines that leave enormous gaps, which can only be filled by knowing the full narrative behind our commitment to those we served and employed.

I, and others, either as a name in an article or as a number in a plea, have been implicated in a multitude of offenses over the last year.

This has resulted in damage to many people’s reputations and integrity by our government and the media. The loss of the company that many loved dearly, along with friends, colleagues and the communities we treasured, has been painful. And all the while I, and others, have not been asked nor allowed to answer a single question by the government, the company we founded, and many journalists who continue to imply wrongdoings. 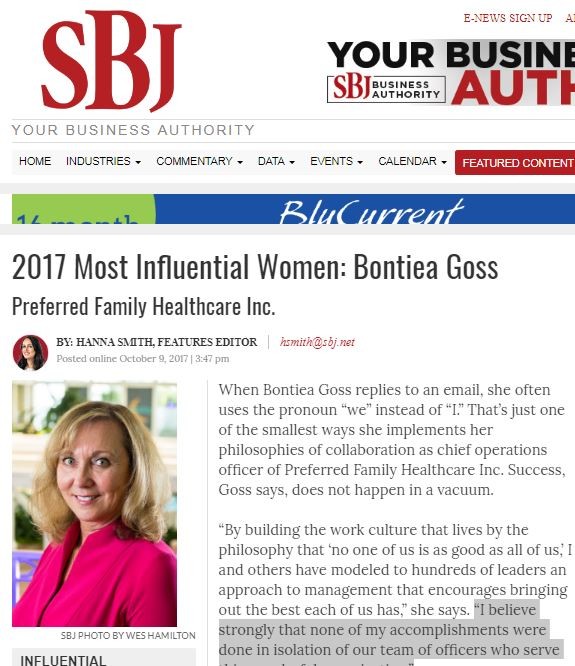 The same publication tapped Goss as one of the most influential women of 2017. She said then:


“I believe strongly that none of my accomplishments were done in isolation of our team of officers who serve this wonderful organization.”

This is a good place, I think, to show you our updated scorecard on the scandal. It lacks the accountant who committed suicide after a guilty plea and a bookkeeper at a Batesville affiliate who’s also been named in a fraud-related charge.