The state Judicial Discipline and Disability Commission announced today that an investigative panel had made the adverse ethical findings against Supreme Court Justice Shawn Womack it had earlier issued against the six other justices. UPDATE: Womack has gone on the attack against a member of the panel that suggested he ran afoul of ethics rules.

An investigative panel found probable cause that Womack had violated ethical standards by not affording Circuit Judge Wendell Griffen proper notice and due process before removing him from all cases related to the death penalty. The Court acted precipitously over a weekend after Griffen decided a property rights case in favor of a pharmaceutical distributor attempting to recover drugs the state of Arkansas had dishonestly obtained to use in executions.

Womack was not included in the first set of findings against the other six justices. It turned out that the notice of the proceeding had gone originally to a former e-mail address so action against Womack was delayed so that he’d have a full response period. The finding against him was identical to that issued the others.

Today’s finding on Womack is here.

All seven justices may contest the finding in a public hearing if they choose. The justices have not made statements on the findings, but I expect them to argue that their ruling against Griffen should have properly been addressed in a court appeal, not in a complaint to the Judicial Discipline Commission.

Griffen has also been cited by the Commission for taking part in a death penalty protest the same day he decided the drug case.

UPDATE: In a departure from the earlier silence of the other six justices, Womack went on the attack against Circuit Judge David Guthrie, one of the three members of the panel that issued the ethics finding. He wrote: 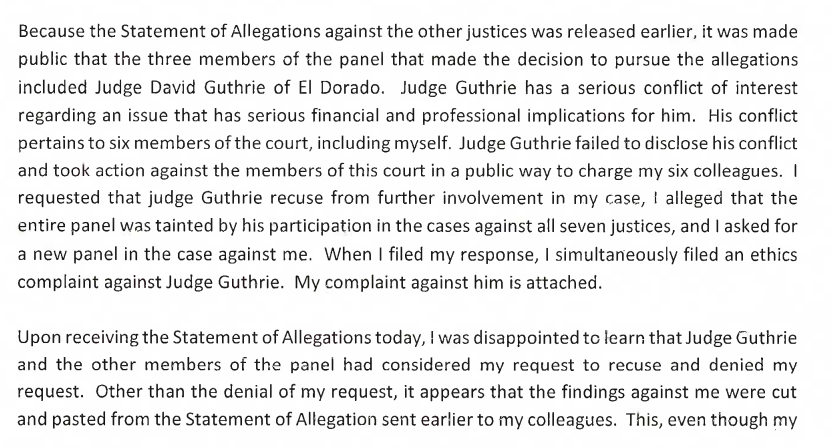 The letter goes on to detail Womack’s complaint against Guthrie. It is that Guthrie is biased against him because Womack cast a tie-breaking vote against a proposal by Guthrie before the Arkansas Judicial Council to back a legislative proposal that would allow judges to be elected after they turn 70 without losing retirement benefits. Womack lobbied against legislation that was introduced to lift the restriction and that upset Guthrie, Womack says. Guthrie also sued to challenge the limitation, a lawsuit turned back by the Supreme Court.  Guthrie alone didn’t make the decision. He was joined by Blake Hendrix, a Little Rock lawyer, and Angela Hopkins of Little Rock.

Womack insists the history of Guthrie’s loss on the issue is important.

The business of saying judges can’t participate in matters on account of differences on other issues now raises the question of whether Womack can fairly hear any cases that reach him from Guthrie’s court. I’ve also raised before the question of his participation in the lawsuit challenge Issue One, the tort reform amendment, substantially similar to legislation Womack carried as a Republican state senator. Judges are presumed to act impartially, absent strong evidence to the contrary. But it would appear tribalism has come to the Arkansas judiciary, as surely as it has come to the legislature.

More questions: What are we to make of Supreme Court justices unhappy about pay raises set by the independent commission, with several members appointed by the legislature. Might court decisions affecting the legislature be viewed in that context? And what of the record of partisanship of justices such as Womack. Should Democrats expect him to recuse from their cases? I think this is a tool best used rarely and temperately. Womack here has gone to war against a single member of a three-member that agreed he’d acted unethically. The record on that, in fact, is pretty clear. The court, feeling political heat, acted to appear to punish Wendell Griffen without giving him a chance to be heard. Fair? You tell me.

Here’s Womack’s full response and his letter of complaint against Guthrie.