We discovered this week another quirk about Little Rock’s “strong mayor” system — it’s a rarity among elected offices in having with the ability to accumulate and collect unused vacation time on leaving office. The tab for Mark Stodola, who leaves office at the end of this year, currently will be $173,623, or roughly 13 months pay at his salary of $160,000 a year.

How can this be? When I asked the question of City Manager Bruce Moore, he referred me to City Attorney Tom Carpenter. He responded:

This email is in response to yours about accrued vacation being paid to an elected official, i.e., the Mayor. In general, when changes were made to the election of the mayor in a city management form of government, the statutory language indicated that the Mayor would receive salary and benefits comparable to the highest paid municipal official. The ordinance that expanded the authority of the mayor triggered Ark. Code Ann. § 14-61-114 (West Supp. 2018) which states:

If an ordinance under subsection (e)(1) of this section is passed, the mayor shall be compensated with a salary and benefit package comparable to the highest-ranking municipal official.

In general, then, Mayor Stodola would receive a benefit package comparable to that of the City Manager (although there have been questions about the salary of the CAW Executive Director, and the Airport Executive Director). The City Manager receives vacation days and the ability to accumulate a certain number of days that was worked out by contract. So, if vacation accrual is part of a “benefit package,” then Mayor Stodola would be entitled to certain accrual.

Presuming that the city manager is the standard (the airport and Central Arkansas Water executives answer to appointed boards), here’s the outline of the pay and benefits to which the mayor is entitled, based on the employment agreement Moore was given in 2002.

I asked Stodola several questions about the payment and he confirmed that he intended to claim it because it was provided by law.

I traditionally take 2 vacations a year, usually long weekends. PTO requests were submitted for those. I recall 3 years that I only took one due to being in the hospital, one for a family illness, and one personal reasons. The duties of a full-time mayor go well beyond the typical work week and work day. I work on city business 365 days a year and into the evening time and worked in fact, while on vacation. My work as mayor includes evening meetings and activities and usually meetings and events on the weekends. E.g. neighborhood meetings, Neighborhood Connections, etc. I work well beyond 40 hours each week

I love this job and have been blessed to have been in basically good health so that I can keep working, but yes I do think a mayor is entitled to the compensation set forth by law for the job he or she is performing.

By his reckoning, Stodola took scant time off. The city recorded these paid time off days for Stodola over 11 years, the equivalent of 56 eight-hour days, or about five per year. There’s no number for his first year as mayor in 2007. 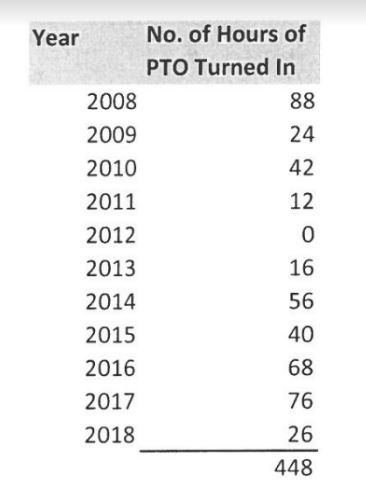 Moore’s contract gives him 25 days off a year. Regular city employees get 20 days off their first three years, 25 through 10 years and 28 through 20 years.

I asked Stodola about days counted as work for two trips to China that took 12 days and an eight-day trip to Argentina in recent years through auspices of the Sister Cities program or the National League of Cities, of which he’s been a national officer. He’s also taken many trips in the U.S. for the League of Cities meetings.


I’ve been honored to represent Little Rock and the State of Arkansas during my tenure as an officer with the National League of Cities bringing prestige, and indeed funding to our city. In response to your question, that representation included foreign travel for one trip each year I was an officer. I had the opportunity to present at a multi-country panel in Beijing about our success in the renovation of Main Street with the Creative Corridor and the Tech Park, which incidentally has won 11 national and international design awards, in September of 2016. I also used the NLC funding of this trip to meet with the representatives of TY Industries which from an economic perspective we were pursing to locate a factory and 400 jobs here and is now located at the Little Rock Port making high quality garments. I also, at the request of AEDC, formalized a sister city relationship, by visiting at their invitation, Jining, China. AEDC asked that I develop a sister city relationship with Jining as part of our efforts to land Sun Industries here in Arkansas.

In September 2017, I had the opportunity in an exchange with Chinese mayors in Chengdu to highlight our innovative Little Rock Technology Park and smart city practices we have put in place. Recently, I traveled to Buenos Aires for a joint conference with their national municipal association for an opportunity to highlight the importance of infrastructure and smart cities practices for U.S. cities like Little Rock and again speak about the Little Rock Technology Park, as well as our efforts to fund and build infrastructure projects like the Broadway Bridge, Robinson Center and even our CityPost Wi-Fi kiosks. Each of these trips was at NLC’s expense. I worked on City of Little Rock business during the entire trips via telephone or computer. I was physically outside of Little Rock for 13.5 work days including travel days.

As for participation in NLC organizations, my work has resulted in $675,000 in private grant funding and over a $1.536 million dollars in federal funding for Main Street alone, as well as three national conferences being held here in Little Rock resulting in several hundreds of thousands of dollars being spent toward our local economy. Little Rock is seen as a very progressive city. We are often cited in conferences for innovation, sustainability, open source data, and our technology efforts. We have received 3 National City Livability awards for our re-entry program, our Animal Village and our summer youth employment program. I have also been recognized by AmeriCorps (the Corporation for National and Community Service) as their Local Official of the Year for our NCCC Weatherization Program and our Neighborhood Safety Program. None of this would have occurred if I had not participated.

Moore’s agreement provides that if he is terminated for reasons other than cause that he may continue to receive coverage under the city health, dental and optical coverage for 12 months. Is voluntarily leaving office a reason “other than cause”? It’s unclear. I asked Stodola about his plans health coverage. He said:

I m not sure of my options. I am eligible for Medicare and plan on using it. But I have disabled family members and kids in college so I am checking the alternatives.

The city contributes to a retirement fund for Stodola as well. I haven’t been able to confirm if it’s identical, but Moore receives an annual deferred compensation payment equal to 12.5 percent of his salary. Stodola also had years of previous employment as a public employee — six years as city attorney and six years as Pulaski prosecuting attorney Stodola, 69, was elected mayor in 2006 and took office in 2007.

One editorial comment: I hope the legislature and other state officials don’t get any ideas from this.