State Rep. Clarke Tucker of Little Rock, the Democratic nominee for 2nd District Congress, says it’s time for Arkansas to be represented by new statues in the U.S. Capitol. That would mean the removal of a statue of his great-great-grandfather, a governor and U.S. senator James Clarke, whose racial views Tucker condemned.

Tucker outlines his thinking in a guest column published this week in the Arkansas Times. His column is joined by a guest column by state Rep. Charles Blake of Little Rock, who writes that symbols matter.

James Clarke is joined in the Capitol hall of statuary by a statue of U.M. Rose, a lawyer namesake of the Rose Law Firm. Tucker writes, in part:

Our family has looked back fondly on Clarke’s service to Arkansas. As families tend to do, we have focused more on his personality than on any particular policy positions, particularly since it all took place before we were alive. While he fought passionately for the causes he believed in — whether it was rooting out corruption from the state Capitol, protecting children from inhumane labor laws, or Philippine independence — we have always known him as someone who was fiercely independent and did not mince words. Sen. Joseph T. Robinson described the legislature’s decision to honor him with a statue as an “unusual tribute” that had more to do with his “character” than their “affection and gratitude.”

…My family is now aware of a statement Sen. Clarke made when he was running for governor in 1894, when he reportedly said: “The people of the South looked to the Democratic Party to preserve the white standards of civilization.”

Obviously, my family and I condemn this statement and reject it in the strongest possible terms. The process of learning about this statement has been painful for us. Regardless, in my opinion, it is important for us, as a family and as a state, to be aware of our history so that we can learn from it and determine the best path forward together. From slavery to Jim Crow to present-day racial disparities in the criminal justice system — as just a few of the most egregious examples — African Americans have endured far too much for far too long in this country.

I, of course, strongly believe it is incumbent on each of us to work as hard as we can to build trust and to eradicate the evil of racism from our society. This is one of the most important reasons why I have offered my own life to public service, to help implement policies that ensure that all Americans, regardless of race or ethnicity, have the right to the American creed that we were all promised — that of life, liberty and the pursuit of happiness.

Part of this work necessarily entails having conversations about what we as a state celebrate. Regardless of the time in which Clarke lived, his statement regarding race was inexcusable, and the time has come to have a conversation about who should represent Arkansas in the U.S. Capitol for the time in which we live now. As Clarke’s great-great-grandson, it is important for me to say that the time has come for Arkansas to be represented with new statues in the U.S. Capitol.

Tucker said that the legislature will make the decision after his term is over, but he said he hoped Daisy Bates or a member of the Little Rock Nine would be chosen. 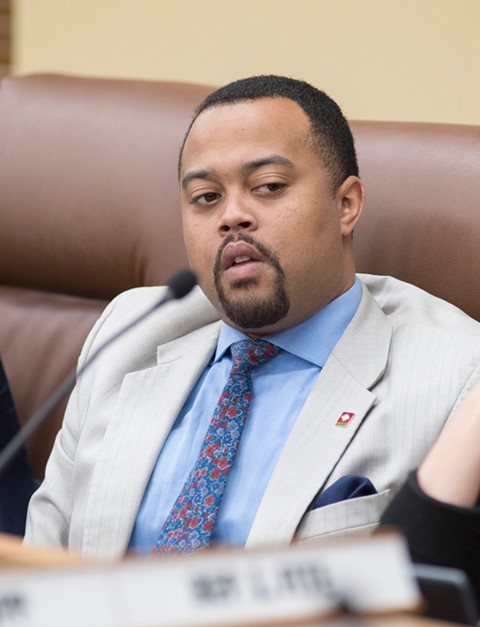 Blake, who became friends with Tucker as fellow students at Central High School, scene of the desegregation crisis, wrote that racism continues to pervade the country.

Racism is a difficult subject for us to talk about, especially here in Arkansas; people often say, “Oh you’re just using the race card” when I bring it up. But I have to bring it up. I am the type of person that when I see something, I say something.

Blake said Tucker is a good person to lead, based on his record on racial issues in the legislature and elsewhere.

I commend Tucker for his thoughtful words on the matter. He has managed to balance always standing with your family, even at the times when they are wrong, but still doing what is right over what is personally comfortable, convenient or expedient. If you look for racism in the history of the South, you will find it, likely in the history of every family. If every family today had a leader like Tucker, doing the right thing even when it is tough, then we would all have bright hopes for a collective future.

Republican Sen. Bart Hester introduced legislation to replace the statutes in 2017, too late for action. But he renewed the call — joined by a few other Republicans — in September. Coincidentally, it came as Tucker is making a strong challenge to incumbent Republican U.S. Rep. French Hill of Little Rock. Hill isn’t likely to run strongly with black voters regardless. Diane Curry, a black woman with little name recognition and mon money, defeated Hill in Pulaski County in 2016 on the strength of a huge black vote. But linking Tucker to his great-great-grandfather could be seen as a way to tamp down black voter enthusiasm.

I will. Hester’s campaign is clearly political. There are more prominent symbols of Arkansas than those in the U.S. Capitol, including two on the Capitol grounds that celebrate the state’s armed defense of slavery. No Republican legislator has suggested their removal.