Civil rights attorneys Ben Crump and Mike Laux held a press conference this morning for their client, Roderick Talley, who Crump said was a “hero” for minority communities in America.

Talley had the door of his Little Rock apartment blow in last year after a “no-knock” search warrant allowed the Little Rock Police Department to conduct a raid of his home. He was then arrested, even though police found only a tiny amount of marijuana in the apartment — not cocaine, as the search and seizure warrant said was believed to be in Talley’s residence. A charge of drug trafficking against him was later dropped for lack of evidence.

“What Attorney Laux and I discovered firsthand about Roderick Talley is that he truly is a hero in every sense of the word,” Crump said. “Roderick Talley refused to be a victim to police corruption, and by doing so, he exposed that there were officers here in Little Rock, Ark., who had a pattern and practice of doing illegal search warrants of people of .”

The Washington Post published a lengthy investigation of LRPD practices on Oct. 14, using the raid on Talley’s apartment and his arrest as the . The newspaper found use of no-knock search warrants, an unreliable informant, suspect testimony by officers, constitutional violations in search warrant issuance, dangerous tactics, unjustified arrests and a pattern of emphasis on black suspects.

Talley filed a pro se federal civil rights lawsuit against the city of Little Rock and LRPD officers in December. Now Laux and Crump are representing Talley in his lawsuit.


In what Laux called “a battle for the truth,” Talley said his determination to resist the charges brought against him began when he was sitting in jail after his arrest. “I thought to myself something my mother, who is now deceased, told me: to always stand up and fight for yourself, and that’s what I decided to do.”

After the arrest, Talley checked the personal security system he’d installed in his apartment — due to a history of break-ins and packages being stolen at the complex — and viewed the video footage of the raid. “It was at that moment that I realized I would be able to do something that a lot of black men in America aren’t able to do, and that’s prove that the police lied on me.”

Crump and Laux said that many victims of the violent, dangerous raids described in The Washington Post article could not afford to have their doors put back on after they were blown off. They referenced the story of one family in particular, who are also included in the article, where no charges were filed, and the LRPD didn’t pay for any damages to the home. The family could only afford to replace one of the doors, so “they had to put cardboard over the back door so the children and the family could hopefully try to preserve some of the heat in their little apartment,” Crump said. “These are poor people that they’re targeting. Ask yourself, why is the Little Rock Police Department doing this? What insidious plan is being conjured up to meet whatever quota to fill this prison industrial complex?”

“It is not appropriate for the city to litigate cases in the news media,” City Attorney Tom Carpenter said in a statement released Monday afternoon. “That said, it should be recognized that the city does not agree with all of the factual statements in a recent article in the Washington Post about illegal drug investigations by the LRPD. In addition, the manner in which LRPD carries out some of its search warrants complies with state and federal law. The city looks forward to the total truth on other issues being developed during the litigation.”

Crump called Talley a “voice for the voiceless” and referred to how Talley filed the initial pleas in the case on his own. “When we use the word hero, you all may not understand the scope of this,” Crump said. “Think about America and times where poor people of are accused of things, and there’s nobody to help them expose the truth. Roderick Talley is an example of that, and that’s why this is so important. 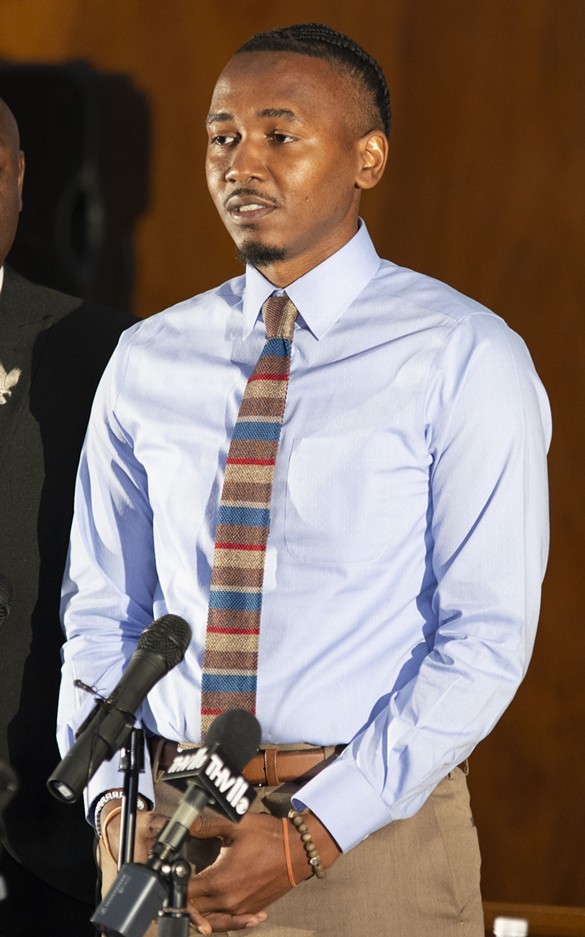 “He refused to go quietly into the night, he refused to submit to the lies. He knew that he had not done what the police accused him of, and he knew that this lie would not be able to live if he continued to fight for the truth.”

Before the press conference began, Russ Racop, a blogger, activist and candidate for the Ward 6 seat on the City Board, entered the room and was almost immediately asked to leave by Laux. Racop said, press, he had the right to be there, pulling out a press pass from his pocket as proof. Laux repeatedly told Racop he needed to leave, but Racop said “your client invited me,” referring to Talley. Laux said that the “invitation” had been rescinded, but Racop refused to leave. The Times did not see Laux physically touch Racop during this exchange, but Racop said, “Don’t touch me, that’s assault,” several times. At the insistence of another organizer, Racop left, but not before telling other members of the press, “Don’t write bad things about him [Laux], then he won’t let you come back.”

The Times has asked Laux for comment on the exchange.