In a report released Monday morning, the state Department of Human Services said it had terminated the health insurance of another 4,109 Medicaid recipients due to Governor Hutchinson’s work requirement for certain beneficiaries of Arkansas Works, the state’s Medicaid expansion program for low-income adults. Those people are now barred from Arkansas Works until January 1.

That’s in addition to the 4,353 beneficiaries trimmed from (and subsequently locked out of) the Arkansas Works program in September, meaning the work requirement has cut insurance for about 8,500 Arkansans thus far. Back in June, when the requirement was put into place for the first subset of beneficiaries, DHS estimated that about 69,000 people eventually would be required to report their work activity hours. The mandate has now eliminated over 12 percent of that initial number.

The Trump administration granted Arkansas permission to proceed with the experimental work rule in March, despite objections that it could lead to thousands being kicked off of their insurance. Arkansas is so far the only state to implement a work requirement; a similar program in Kentucky was blocked by a federal judge before it could get off the ground. A group of plaintiffs are suing to stop Arkansas’s work requirement as well, but a decision in that suit is likely months away.

Because the new requirement is being phased in on a rolling basis, it is likely that coverage losses for November and December will be comparable to those in September and October. Beneficiaries are kicked off if they fail to report sufficient work hours for three months (consecutive or not) in a given calendar year. The 4,100 who just lost coverage were in their third month of noncompliance. (The DHS report said another 4,841 were in their second month of noncompliance and 7,748 were in their first month.)

And independent of the losses directly attributable to the work requirement, the latest Medicaid enrollment numbers from DHS show Arkansas Works is shrinking for other reasons as well. On January 1, there were about 286,000 people enrolled in the program. On October 1, there were about 253,000.

The decline may be due in part to a strong economy that has lifted some beneficiaries’ income above the eligibility threshold for Medicaid expansion — 138 percent of the federal poverty line — but it may also be due in part to DHS policies that cancel people’s insurance because of returned mail or failure to respond to minor paperwork. As the Arkansas Nonprofit News Network reported in August, Arkansas saw a larger percentage decrease in its Medicaid population over the past 18 months than any other state that expanded Medicaid.

State and national data show the majority of Arkansas Works recipients in the target population are likely working already. However, to fulfill the requirement, it is not enough to simply have a job. Beneficiaries must create an account through an online portal run by DHS. (Critics complaint that the process is confusing and the website is glitchy and frequently down for maintenance.) They must then log on each month to report at least 80 hours of “work activities,” which may include some portion of school, volunteering, job training or job search hours.

Only a small percentage of those subject to the work requirement actually reported their hours through the portal, DHS data show. The vast majority either claimed an exemption or else were automatically excluded by DHS. Only about 1,500 people in September satisfied the reporting requirement — and of those, over 1,000 did so by complying with a separate, preexisting work requirement in the SNAP program. 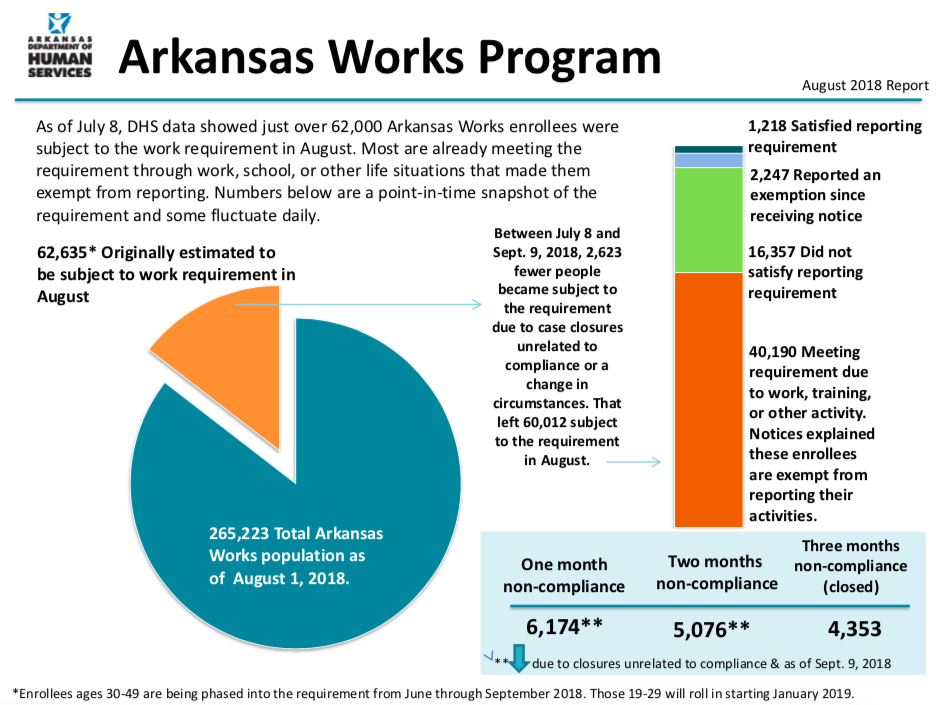 At a news conference in September, the governor said he would prefer to see everyone on Arkansas Works comply with the requirement. But he defended the rule as good policy and downplayed the possibility that those who had lost coverage might go without much-needed medical care or prescriptions.

Though Hutchinson has championed the work requirement — as well as other changes to Medicaid that have cut state costs and suppressed enrollment — he has also defended Medicaid expansion itself against fellow Republicans in the state legislature who have sought to end the program entirely. Expanding Medicaid to cover low-income adults was a part of the Affordable Care Act, or Obamacare.

The majority of the approximately 253,000 on Arkansas Works are exempt from the requirement, DHS data shows. Beneficiaries with a dependent child in the home are automatically exempt, as are full-time students and certain people deemed “medically frail.” (Those in the larger “traditional” Medicaid program — including children on ARKids, the elderly and people on federal disability — are not subject to the work requirement.)

In a statement, Henderson said:

I believe our governor should prioritize making it easier to access affordable health care, not harder. Last week, Asa Hutchinson admitted he was unable to lead his own Republican supermajority in the state legislature to reauthorize Medicaid expansion unless he included this internet requirement, which has received national recognition for its failure and disastrous consequences for Arkansas and our families. We should demand a better standard of leadership for our state.

This negligent internet reporting policy jeopardizes our rural hospitals and their staff as thousands will be receiving uncompensated care after losing their health insurance. Arkansans know that access to quality health care allows them to show up for work and provide for their families, and this internet requirement is a bureaucratic barrier to that success.

Later Monday afternoon, Governor Hutchinson responded by email to a request for comment on the latest losses. He maintained that the 4,100 Arkansans who lost coverage in October either did so by choice or have found insurance elsewhere:

The numbers in this month’s Arkansas Works enrollment report continue to reflect what we saw last month—that thousands of Arkansans have found jobs or received training because of the reporting requirement. There are plenty of jobs and training opportunities available in Arkansas, and the work requirement connects those who need training with the services and jobs currently available.

The 4,109 individuals who have not reported activities for the past three months under the common-sense work requirement have either found work, moved onto other insurance, moved out of state without notifying DHS, or chose not to comply.

We have gone to great lengths to ensure that those who qualify for the program keep their coverage. Arkansas Works provides opportunities for individuals to gain employment or work training. It also allows us to concentrate resources on those who need it most rather than continuing to pay insurance premiums on those who no longer qualify.

This reporting is made possible in part by a yearlong fellowship sponsored by the Association of Health Care Journalists and supported by The Commonwealth Fund.