Arkansas Advocates for Children and Families is highlighting a new report relevant to ongoing legislative discussions of “tax reform.” It does not suggest the problem is taxation on the rich.

A new study released today by the Institute on Taxation and Economic Policy (ITEP) ranks Arkansas as the 20th most unfair tax system in the nation and one of the worst when it comes to taxing the poor.

According to the report, Arkansas’s tax system is unfair, or regressive. That means the lower someone’s income, the more they pay in taxes for every dollar they earn. One key reason for this is that Arkansas relies heavily on sales taxes to raise revenue. Because those with low and modest wages spend a larger share of their income on consumer goods – like food, clothes, and other necessities – this tax hits them harder than the rich.

Tax “reform” talk in Arkansas of late has been led by Gov. Asa Hutchinson’s insistence that enough has done for the poor and it’s time for a whopping income tax cut for those on the high end of the scale. He wants almost a 15 percent reduction, from 6.9 percent to 5.9 percent, for the top income tax bracket. That bracket kicks in at $35,000. But the benefit of the tax cut would overwhelmingly go to the highest income — more than 75 percent to those making more than $80,000. Our previous analysis showed that those making more than $500,000, or a quarter of one percent of taxpayers, get about a fourth of the benefit, or $1 in every $4 tax cut dollars.

Coming next month, the Advocates will assess the recommendations of the legislative group that has been studying tax “relief.” They’ve rejected help for the poor through an earned income tax credit. Giveaways to corporations and the wealthy predominate.

Here’s the Arkansas breakout on the new report. 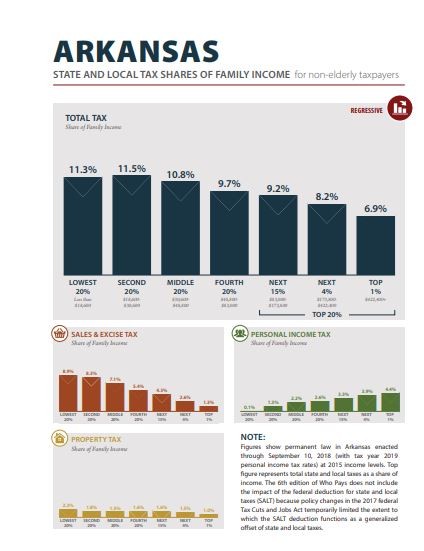 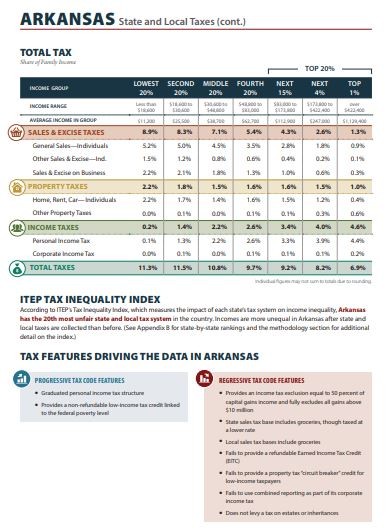