Police Chief Kenton Buckner has been named new police chief in Syracuse N.Y., after a little more than four years as head of the Little Rock force.

This will be a cause for some celebration in many quarters.

City Manager Bruce Moore sent city directors the news this morning. Shortly after, the news was made official in Syracuse.

Buckner’s last day in Little Rock will be Nov. 16. Moore is meeting with three assistant chiefs today about the future interim chief.

“When we began looking for our next police chief, our goal was to find the very best candidate available. In hiring Chief Buckner, we have achieved that objective. Chief Buckner brings effective crime reduction strategies and a track record for increasing the diversity of his force. He understands the importance of having strong partnerships with law enforcement and the community to make our neighborhoods safer. Syracuse has an outstanding police department. I believe Chief Buckner will make it even better,” Walsh said in a statement.

Choosing a new chief is the job of the city manager under Little Rock’s blended form of government, though the city board and mayor’s thoughts undoubtedly play a role. The coming of a new mayor from candidates who had a range of thoughts about the current chief seems likely to be a factor.

Buckner, though an African American, was at odds with black police officers and more aligned with the majority white members of the force, aligned with the Fraternal Order of Police. He backed the provision of dozens of free cars for white officers to commute to homes in suburban cities, residency many police put down to crime in the city they police and their low opinion of the majority black city schools.

Good riddance. He left this letter. 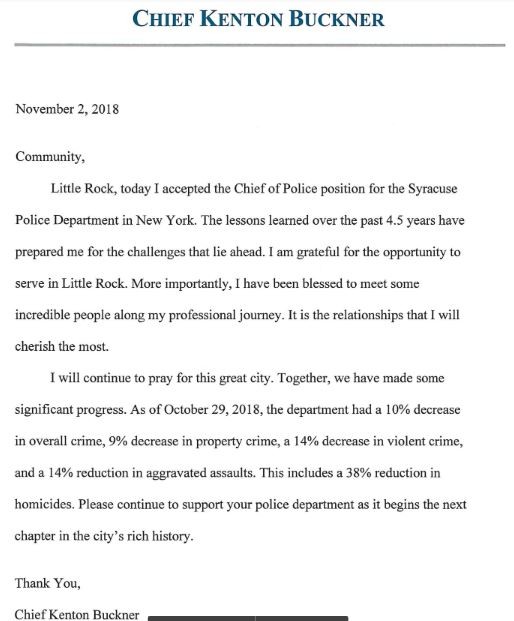