Sen. Joyce Elliott has provided on Facebook some background on the omnibus education legislation of 2017 that gave Education Commissioner Johnny Key the ability to waive state law so that he could fire at will select Little Rock school teachers — all at 22 majority black and poor schools. She challenged the law change at the time, including questions about teacher fair dismissal, but the law passed primarily with Republican support and a notable Democratic exception in Little Rock, Rep. Warwick Sabin.

The legislation allows waiver of the fair personnel law in districts in academic distress. That’s only Little Rock, in state control for four years. Key wants to blame teachers in 22 schools for low scores though another 180 schools statewide have similar grades. Key has been the school the last four years. The last elected school board was fired for low scores in six of 48 schools. Now Key, in charge for four years, wants to blame teachers.

Most of the debate in the 2017 legislature was about a new “accountability” system for deciding which schools were meeting standards and which were not. Buried in that bill — and little noticed in media coverage at the time — was the provision that would allow waiver of state personnel law in certain cases. Elliott, a careful reader, raised questions then, but the bill was approved nonetheless. Most Democrats did not support it.

A notable exception was state Rep. Warwick Sabin, a candidate for Little Rock mayor, who’s been challenged on that vote recently as he expressed support for teachers. He’s responded that the bill had many parts. Indeed. But, in the Senate, Democrats Will Bond, Linda Chesterfield, Joyce Elliott and Keith Ingram voted no. In the House, most Democrats voted no or didn’t vote or voted present — all the same as no votes. Sabin and Rep. Greg Leding of Fayetteville were among the rare Democratic yes votes.

Here’s what Elliott wrote, including a direct question on teacher fair dismissal and other questions that hold continuing peril for the existence of conventional public education against the onslaught of Walton money to , and otherwise wrest education from the democratic process, as Key has done in Little Rock:

When Act 930 (then SB647) was presented late in the 2017 Legislative Session, I had 14 major concerns I wanted discussed, adopted and/or clarified. I have posted them below EXACTLY as I put them on paper in preparation for the presentation of the bill in the Senate Committee. As I recall, I got to the first 3 or 4 before yielding so others could participate, then come back to me. That participation lasted about another 10 minutes before a motion was made to move immediately to a vote (which is within the rules) on this huge bill we’d had for a few days, something like over a weekend, I believe. Nevertheless, I read every word of it, which was the reason for my concerns, all of which are not among the 14. I never got to go back to the rest of my concerns before the bill was passed. When the bill came to the floor for a vote, it passed 23-12 with little discussion. I voted NO.

Below, without edits, are my original concerns in full.

Include language for charter school systems. For example, eSTEM is now a system. Probably others. Just not called so. Page 43, line 13.

2. What role does legislature play in standards’ setting? Page 44, line 34.

3. More testing? What will trigger this testing? How will the results be used? Page 46, line 10.

4. Any new efforts to ensure more clarity in the scoring process? Is this the point of the language page 48, beginning with line 14?

5. Can we please explore a different way to determine the need for remediation? How confident are we in the method we use? Page 51, line 14.

6. Prior to accepting a recommendation from an appointed superintendent or the commissioner to close a school(s) within a district, the SBOE shall require, a neighborhood/community impact study shall be conducted. The impact study must include all affected schools and neighborhoods/communities affected to help determine the impact on students, families and the neighborhood/community at large. Page 55, line 31 or other appropriate placement in the bill.
For page 56, line 34, the same shall apply in case of reconstitution, annexation or consolidation by the SBOE. Suggest adding “school improvement specialist to be mutually agreed to by the state board and the newly elected board” as another option to reconstitution, annexation, or consolidation.”

7. Does “state law” mean the Fair Dismissal Law? See page 23, lines 19-24 for all of deleted language. from new page 56, line 4. What about negotiated agreements?

8. Delete the ability to remove “some” board members. This is fraught with inability to have any appearance of or real fairness, not to mention picking and choosing which duly elected board members should be removed just should not happen, page 56, line 10.

9. When a new election of district board of directors is called, be sure there is no confusion that previously “dismissed” boards members are eligible to run (in case there is thinking otherwise). Page 56, line 13.

10. Why “an individual” as an option? Is the panel what is now the community advisory board? Does it have any authority? Will legislators have input? Page 56, line 19.

11. Be clear that removal of a school from its jurisdiction applies to school at Level 5, not other schools. I assume that is correct. Page 57, line 17.

12. The state board should return local control through election of local board of directors, not by appointing a board. That makes a mockery of democracy. Page 58, line 9.

13. Remove commissioner’s recommendation, giving the authority board to act autonomously. Board can ask for recommendation if it wishes one. Page 58, line 11.

14. Page 58, lines 27-32: At this point a district will have been under State control for 5 years. Why is the state not also considered a failure? I suggest language that reads: If the public school district (or open enrollment charter school) and the the department of education working together have not demonstrated to the state board of education that the criteria to exit Level 5 have been met, the board of education shall return the district to local control and may require the district to engage the assistance of a school improvement specialist to be mutually agreed to by the state board and the newly elected board of directors.

Mighty nice of the Arkansas Democrat-Gazette, in front-paging Johnny Key’s whine about criticism from teachers, parents, students and the concerned public education advocates, to give a single sentence to education professor Dr. Michael Mills searching essay on what’s wrong with Key’s targeting of Little Rock, and only Little Rock, teachers while ignoring the state and national dilemma of test score gaps for poor and minority children. It’s illustrated graphically below with the racial and poverty percentage, by school grade, in statewide results. 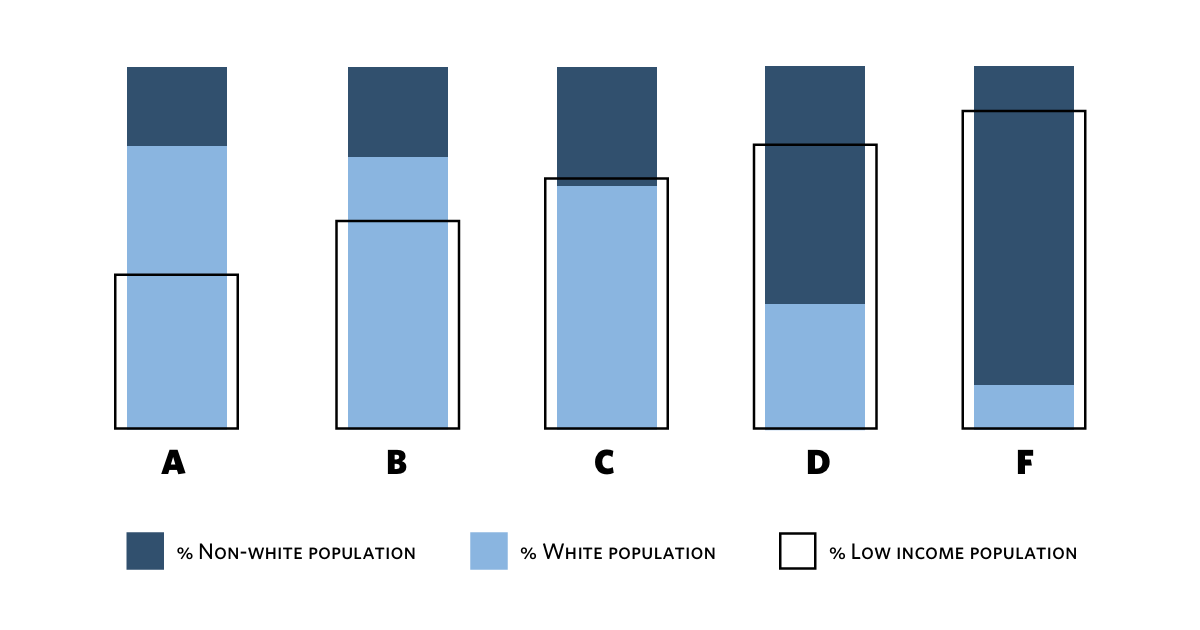