The state Correction Board meets Monday at State Police headquarters and some important topics — prison population and a dangerous drug responsible for prison deaths — are on the agenda.

Here’s a deep analysis of prison population, which notes an increase in prison population in 2017 after some static years and includes a projection of continued growth. New prison admissions are down, but releases are also down and there’s been a recent increase in violent crime against a decrease in overall crime statewide. In short, though new admissions are down, that’s been outpaced by a decline in releases. This is due to a decline in the imprisonment of technical parole violators who typically are released more quickly. The report predicts a 10 percent gain in population over 10 years, another potential cost factor to consider as the governor pushes to cut taxes on the wealthy.

There’s also a report on the rise in work for Community Corrections, a department whose last director departed in part over differences with Gov. Asa Hutchinson on the need for more parole and probation officers. Again, Hutchinson wants to save money to cut taxes for the wealthy.

Then there’s K2. State Police Director Bill Bryant is scheduled to give a presentation on the synthetic drug. There’s no forecast on the presentation. But it’s a problem in the prison, seemingly unchecked by a number of security steps taken to keep it out. The Correction Department is reluctant to release much information about individual deaths in the prisons or their causes, but we have some baseline numbers from the State Police. 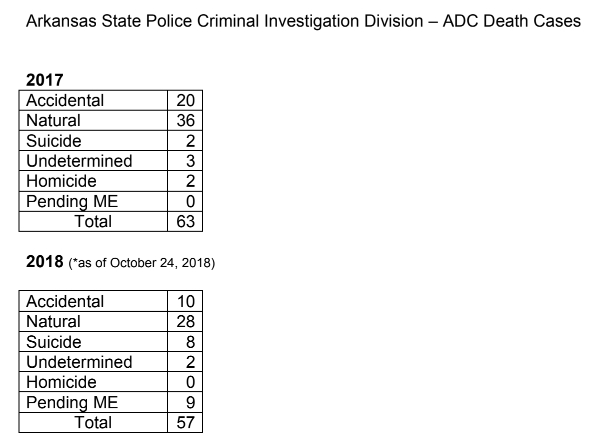 The State Police can’t break down these numbers as to those specifically drug-related. These are merely the categories, following a medical examiner review, by which the State Police determine further action. That arises in cases of homicide.

But it’s a given that most, if not all, the “accidental” deaths are related to ingestion of lethal amounts of drugs. Note that medical examiner findings are pending in nine of the deaths in the first 10 months of this year.

Most though Correction officials are reluctant to admit it, that employees are often responsible for drug smuggling in the prisons as a money-making opportunity.