Roderick Talley, the plaintiff in a case over abusive Little Rock police practices in drug raids, was named Wednesday in a Cross County sheriff’s report for driving into a deputy while attempting to avoid arrest on a failure to appear in court warrant. The Little Rock Fraternal Order of Police has made it an issue in the mayor’s race.

Talley was due to appear in court on an unknown charge (court records indicate a forgery charge was filed against him last January and he’d asked that it be dismissed). He contends he was late because of snow in eastern Arkansas, but a warrant for his arrest was issued. According to a sheriff’s account, he’d been arrested, but then jumped into a friend’s rental car and tried to drive away. When a deputy stood in his way, Talley continued driving and the deputy fell on the car’s hood and then rolled off. He wasn’t seriously injured. Talley left the scene.

Today, the Cross County Sheriff’s Office attempted to arrest Roderick Talley for failure to appear because he was approximately 20 minutes late for a court hearing in Wynne, Ark. due to inclement weather affecting much of the State. Make no mistake about it, we believe this arbitrary, heavy-handed action
by the powers that be constitutes retaliation against Mr. Talley for the civil rights lawsuit he recently filed against the LRPD. Nonetheless, clearly, no arrestee should ever panic and flee as Mr. Talley did today, whether the charges they face are legitimate or not.

In any event, while we dispute the factual rendition offered by CCSO, we have spoken with our client will arrange for him to turn himself in tomorrow, November 15, so that all the pertinent facts can be determined and so that any and all legal processes can move forward. On the subject of the accuracy of CCSO’s rendition of facts, we also intend to demand the preservation of any and all video footage of the event that may exist and which depicts the courthouse, its adjacent parking lot or anywhere in the vicinity of the alleged event.

Lastly, we feel compelled to mention that, whatever truly occurred today in Wynne, it has absolutely no bearing on the legitimacy of Mr. Talley’s civil rights lawsuit alleging an unconstitutional pattern of dangerous and illegal “no-knock” LRPD raids, a lawsuit that continues to add multiple Arkansas plaintiffs each day.

UPDATE: Check this on the Facebook page of the Fraternal Order of Police, a retrograde organization that has always defended the worst of LRPD practices and reflects the typically Republican thinking of the white suburban residents who make up the biggest portion of the force. 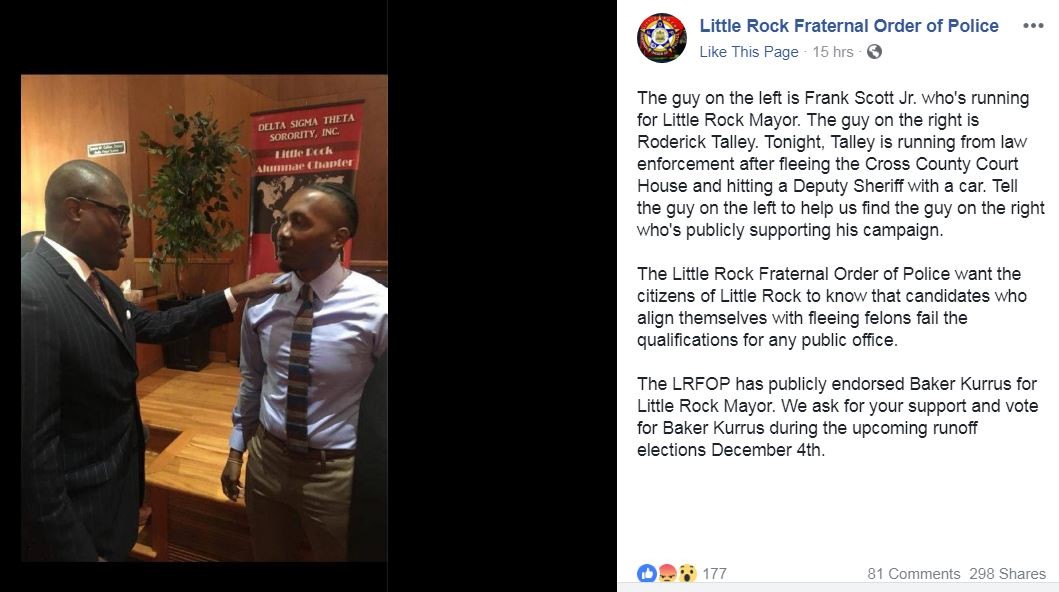