The uninsured rate for children nationwide ticked up last year, including in Arkansas, according to a new report released by the Georgetown University Center for Children and Families — the first significant increase in a decade. (*Updates below with comments from Arkansas Advocates and additional Arkansas-specific data.)

Nationwide, an estimated 3.9 million children were without health insurance in 2017, representing an increase of around 276,000 children from the prior year. That brought the uninsured rate from 4.7 percent to 5 percent.

In Arkansas, the number of uninsured children increased from 30,000 to 33,000 in 2017, bumping the children’s uninsured rate from 4 percent to 4.4 percent — still below the national average.

“With an improving economy and low unemployment rate, the fact our nation is going on children’s health coverage is very troubling,” said the report’s lead author, Joan Alker, the executive director of the Georgetown University Center for Children and Families and a research professor at the McCourt School of Public Policy, in a press release. “Even states with the best of intentions were unable to withstand strong national currents to fully protect children from losing coverage.”

Rich Huddleston, executive director at Arkansas Advocates for Children and Families, expressed concern about the report’s findings. “We’ve made 20 years of steady progress in reducing the uninsured rate for Arkansas kids,” he said.

Prior to the enactment of ARKids First in 1997, almost one in four Arkansas children had zero health insurance.

“We had gotten it down to a historic low of around 4 percent,” Huddleston said. “So in 2017, when we see an increase in the number of uninsured kids after so many years of steady progress, we’re concerned. We know how important health care coverage is to access affordable and high-quality health-care services for kids. The research is pretty clear that if you don’t have access to health care coverage, you’re much more likely to have unmet health needs — and if you’re not a healthy kid, you’re much less likely to enter school ready to learn, do well in school, and succeed later in life.”

The percentage of uninsured black children in Arkansas increased significantly during the same time period, from 1.5 percent to 4 percent. Children living just above the poverty line saw a big increase, as well, with their uninsured rate increasing from 3.2 percent to 7.5 percent.

Around 57 percent of uninsured children are eligible for Medicaid or CHIP (known in Arkansas as ARKids) but are not enrolled. In the report, Alker suggests that “federal actions contributed to a perception that publicly funded health coverage options are no longer available or, in the case of an immigrant parent, created concern about enrolling their child in public coverage for fear of reprisal.”

Low-income parents may not always have the best information about available coverage options for their children, but efforts to expand coverage, including to adults, can help bridge that gap. Parents who have coverage themselves are more likely to have coverage for their children. Researchers have long noted that when policymakers expand the number of people who are eligible for coverage, those who were already eligible are more likely to sign up because they are more likely to learn about options. This is called the “woodwork effect” or the “welcome mat effect.” Alker suggests that the actions of the Trump administration, attempts to cut the Medicaid rolls by red-state governors, and the histrionics from the GOP Congress have created something like the reverse — “an ‘unwelcome mat’ effect where families are unaware of their options or deterred from seeking coverage” — leading to a reduction in the number of insured children.

The “welcome mat effect” helps explain why Medicaid expansion — which covers low-income adults — contributes to an increase in the number of children gaining insurance, even though those kids were already prior to expansion.

States that chose not to expand Medicaid have been hit especially hard by the recent decline in children’s insurance rates, the report:

Alker also suggested that “tightened verification procedures” may have contributed. That’s certainly a concern in Arkansas. Even prior to the recent imposition of work requirements on certain beneficiaries in 2018 (parents are exempted), the Hutchinson administration has used the eligibility verification process to purge the Medicaid rolls via death by a thousand , at times in violation of federal law. A confusing and poorly managed process has stripped families, including children, of their health insurance for paperwork mishaps even when they are in fact eligible. Unwelcome mat indeed.

For all of the hits it has taken from the Hutchinson administration, the state’s Medicaid expansion has helped Arkansas remain below the national average in terms of children’s uninsured rate: 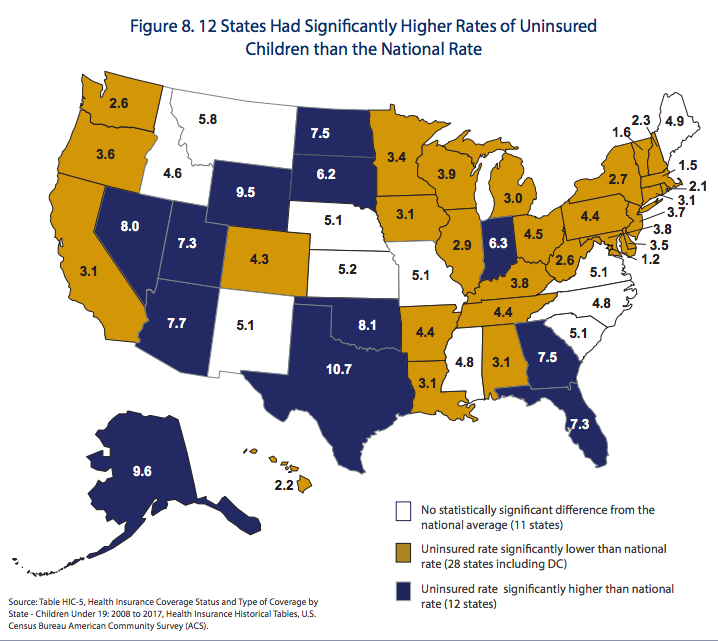 This increase in the child uninsured rate, particularly in states that did not expand Medicaid, is a warning sign to policymakers. Barring new and serious efforts to get back on track, there is every reason to believe the decline in children’s coverage is likely to continue and may get worse for America’s children.

Uninsured children are more likely to have unmet health needs and lack a usual source of care. Untreated medical conditions such as asthma lead to missed school days and reduce children’s chances for success in school. These findings should raise concern about the chances for all children to grow and thrive. A long-term bipartisan effort that has dramatically lowered the uninsured rate for children is now at risk.

Huddleston said that he feared that this data — for 2017 — could foretell continued declines in the children’s uninsured rate. “If you look at things that have happened over the last two years, both nationally and in Arkansas, I think we have other reasons to be concerned,” he said.

He pointed to the Trump administration’s various efforts to undermine the ACA, as well as the “anti-immigrant atmosphere” fostered by the administration’s rhetoric and actions. “Even for kids who are citizens but who may have one or more immigrant parents, I think these families are much less likely to want to interact with the government, even to sign up for good programs like ARKids First.”

As for the new work reporting requirements newly implemented this year in Arkansas (after the data collected for this report), Huddleston said that it could exacerbate issues with making sure kids get covered due to the “unwelcome mat” effect noted by Alker in her report (see above). “While it’s true that parents [of dependent children] are exempt, that’s for those who are already in the program,” Huddleston said. “But families hear this. To the extent that it reduces the willingness of new low-income adults to apply for — and in some cases get their kids to apply for ARKids for the first time — yeah, it could have an impact.”

He added that the various changes the state implemented to its eligibility and enrollment systems implemented over the last few years may impact these numbers as well. “I think we still don’t know yet to what extent that had an impact in terms of the uninsured rate,” he said.

“We also have to take a step back and ask to what extent are we really doing high-quality outreach and public education around the ArKids First program,” Huddleston said. “What’s happened there the last couple of years? In past decades, there was a lot of outreach around the ArKids First program. To what extent is that outreach being done? That’s a question we need to look at.”