Balko notes that his investigation into systematic problems in the LRPD came up in the race:

Here’s Balko on the challenges ahead for Scott:

Scott will face challenges. Shortly after my longer LRPD piece was published, Chief Kenton Buckner accepted an offer to become police chief in Syracuse, N.Y. Currently, the police chief is chosen and hired by the the Little Rock city manager. Scott wants to change that, putting the decision in the mayor’s hands and, in theory, in the hands of someone more directly answerable to the electorate. But he’ll need cooperation from the city’s board of directors to make that happen.

Roderick Talley also became a factor in the race, when he was used in a racially charged smear campaign by the Little Rock Fraternal Order of Police, which was backing Kurrus in the race.

Talley was the victim of a dangerous no-knock raid by the LRPD narcotics unit on spurious charges that was caught on surveillance video and sparked Balko’s investigation. Talley was featured heavily in Balko’s reporting and became active in pursuing open-records requests on other raids performed by that narcotics unit, as well as filing a federal lawsuit against the city of Little Rock and LRPD officers for the raid of his home.

In mid-November, Talley was accused of striking a police officer with his car after fleeing a courthouse where his arrest had been ordered because he was late for a court appearance. The officer was not injured. Talley has admitted that he fled, but maintains that he didn’t hit the officer with his car. There is surveillance footage that has not been released publicly, though Talley’s attorneys have been trying to get ahold of it. The most serious charge against him, aggravated assault on a police officer, has now been reduced to a misdemeanor, though Talley still faces other charges, some of them highly dubious. He is now out on $62,000 bail.

After the charges against Talley, the FOP posted this guilt-by-association photograph of Scott praying with Talley, taken during the news conference announcing federal Talley’s lawsuit: 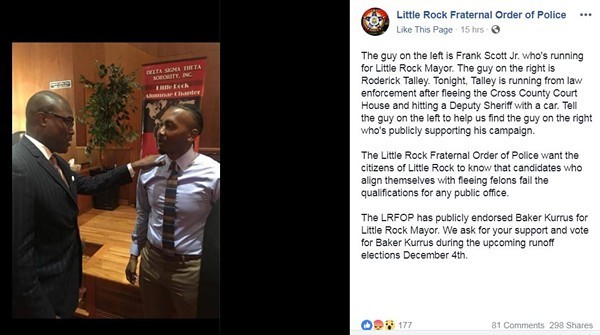 The post was taken down after heavy criticism; Kurrus himself asked the FOP remove it, though he would not reject the FOP’s endorsement.

Here’s Balko’s take on the incident:

The Little Rock Fraternal Order of Police used the Talley incident against Scott. (The FOP has long been seen by black Little Rock officers as a “good ol’ boy” network that’s much more aggressive protecting the rights of white cops than black ones, particularly in interracial disputes. Black officers started their own union in the late 1970s and have maintained it ever since.) The FOP posted a Facebook photo of Scott praying with Talley taken after the news conference announcing Talley’s lawsuit for the raid on his home. The Facebook post also included incendiary, racially loaded language about how Little Rock mayoral candidates who “align themselves with fleeing felons fail the qualifications for any public office.” The FOP eventually took the post down. Both candidates denounced the post, but at the last debate before the runoff, Scott asked Kurrus to reject the FOP endorsement outright. Kurrus refused.

And he notes that Scott will likely continue to face resistance from the FOP, whose leadership has long been dominated by white cops who live in suburbs outside of Little Rock:

Scott will also face a hostile FOP. He’ll get a lot of resistance that promises to make reform difficult, particularly in a city police department that’s still understaffed. One big issue that lots of people cited when I asked about the problems at LRPD was that most of the white police officers live outside the city. It’s important that cops feel as if they’re a part of the communities they serve — and it’s just as important that those communities see police officers in the same way. But I don’t know how you go from a city where most of the white officers live outside the city to one where most live in Little Rock. You can’t force people to move. It’ll be a long process.