The Little Rock City Board heard news of a bonus for non-uniform employees at the meeting at which they discussed adding almost $900,000 in value to outgoing Mayor Mark Stodola’s pension three weeks before he leaves office.

The bonuses will range up to $500 per employee, with lower paid employees getting larger bonuses.T he non-uniform employees otherwise are scheduled for no pay increase this next year. Here’s what is proposed, but not yet approved: 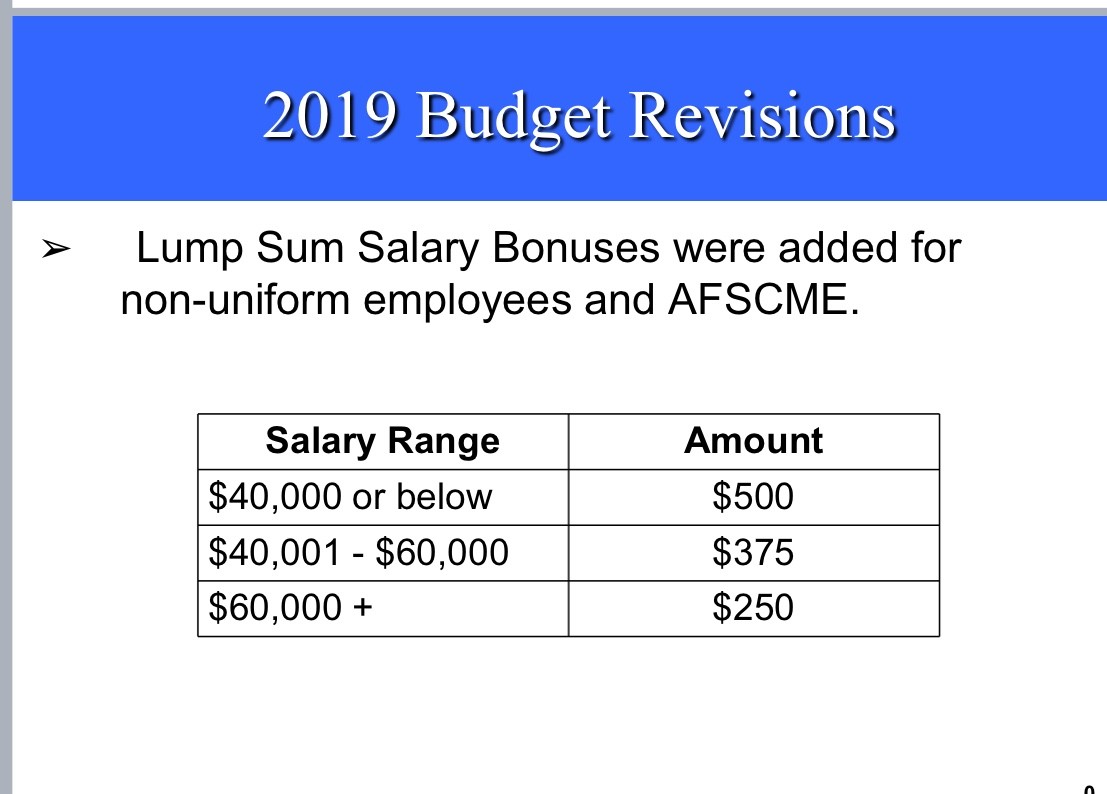 City Director Joan Adcock objected to passing the budget with the bonuses at this meeting without prior public notice. In votes that followed, the Board put off a final vote on the budget office until Dec. 18.

Adcock also objected to the consideration of Stodola’s improved pension benefit without public notice. I got some information about it through an FOI request last night, but nothing was posted on the city website about the deal until today. City directors saw little until two hours before the meeting.

An actuary has estimated the value of all the changes amount to around $1 million. Part of that will be paid by the city recapturing its contributions to the old pension plan, but NOT the money Stodola put in. City Manager Bruce Moore has defended the change so that Stodola will receive a pension benefit commensurate to his own, as state law requires. He also says state law provides a half-pay pension for mayoral pensions after 10 years of service at 60, though that statute doesn’t specifically apply to city manager cities.

Adcock also raised questions about the cost of the new benefit, which were deferred to Jody Carreiro, the consulting actuary.

A motion to advance the ordinance to a second reading failed on a 5-4 vote. I couldn’t detect all the nays, but they included Adcock, Ken Richardson Kathy Webb.

Adcock pressed for answers on questions about the cost of the pension. She also brought up the fact that a $173,000 payment for unused vacation was a separate issue from the enhanced pension. City Attorney Tom Carpenter said the Board had to decide on payment of the unused vacation time. “Who’s going to discuss it?” Adcock asked. “It’s an issue for the Board of Directors to decide,” said Carpenter. It does not exist on today’s agenda or matters to be discussed Dec. 18. When will it be discussed, Adcock asked. Again, a good question that remains unanswered.

Carreiro said the pension changes for Stodola would increase the total city liability for the mayor to be covered under the pension plan to $890,000, more than a million if it gave him a no-cost spousal survivor benefit.  Applying past city contributions to his private pension would reduce the net cost to $490,000. That figure could change depending on the COLA chosen for the mayor. It is two-thirds of the Consumer Price Index in a year for other employees and in the proposed ordinance. A provision to provide continued benefits for a surviving spouse would not be given at no cost to the mayor under the ordinance on the table. He would have to take a reduced benefit to pay for the spouse coverage. But if he’s given the benefit without payment, which the board could decide to do, it adds $140,000 in additional liability to the city.

The annual cost would depend on how the city chose to pay it. If done over 10 years, it would cost the city about $60,000 a year in additional pension contributions to fund the promised benefits to Stodola, the actuary said.

Questioning by Directors Dean Kumpuris and Lance Hines seemed aimed at saying the board had little option and that it would create a situation where the mayor was treated equally with other city employees. That’s not strictly true, as the city human resources officer has noted, because the new plan began only four years ago and a city employee must be a member for 25 years to achieve maximum benefits.

Adcock drew out that Stodola has $178,000 accrued in retirement that might roll over to him on the change in pensions and is expecting $173,000 in vacation pay, more than $340,000 all told. She was told the pension money comes from the mayor’s private pension fund. She asked if it could be used to pay down the city’s increased liability. Carpenter said legal advice was that letting the mayor keep his own personal contributions was the “safest’ way to preserve the tax treatment of the city employee pension plan.

Adcock continued to press for a discussion of resolving the vacation pay issue. Kumpuris urged a discussion tonight. Hines brought up the question of what the law requires for Stodola’s vacation pay. It is supposed to be comparable to that of the highest paid city employee. That has generally been considered to be Bruce Moore, but the heads of the airport and water utility both are paid more by independent commissions. Moore’s salary, once equal to the mayor, is now about $189,000.

Director Doris Wright asked why the mayor couldn’t be paid accrued time at the same rate as city employees, who have a 500-hour limit. That’s a little more than 12 weeks. Stodola is seeking more than a year of pay. Wright said it would be fair to treat Stodola the same as other employees.

The issue wasn’t resolved and a specific time to discuss it wasn’t set.