The University of Central Arkansas made “the biggest announcement in its 111-year history” this afternoon — a $20 million gift from the Windgate Foundation for a fine arts center. 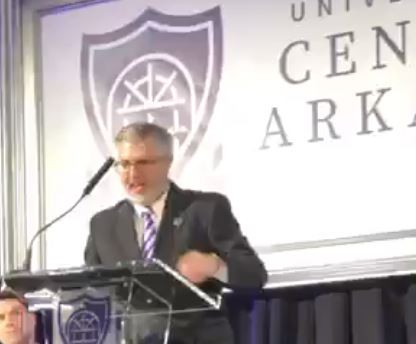 The school described the gift as “historic” and “transformative.” Officials hope the gift will spur major donations from others in a capital campaign.

The Windgate Foundation, one of several philanthropic organizations that owe strength to fortunes made in Walmart, is based in Siloam Springs has been a major contributor to projects throughout Arkansas.

The arts center will include a theater and concert hall, plus classrooms and studios.

$1 million of the Windgate gift will go to an existing scholarship fund.

Windgate’s recent gifts have been directed to a fine arts district in Fayetteville, a Fort Smith , the Arkansas Arts Center and others.

The University of Central Arkansas announced today that it has received the largest gift in its 111-year history, $20 million from Windgate Foundation. This extraordinary matching gift will support the new, state-of-the-art Windgate Center for Fine and Performing Arts and make UCA a regional leader of the arts.

Plans for the 114,000-square-foot Windgate Center for Fine and Performing Arts include 44,000 square feet of art space; an exterior space for three-dimensional art; an art gallery to engage and inspire the Conway community; a 450-seat concert hall designed for orchestra, choir, band and ensemble performances; and a proscenium theatre that will allow for a wide range of theatrical performances, including musical theater and opera. The facility will add much-needed class, studio, rehearsal and design space, which will increase program capacity and allow more students to pursue fine or performing arts degrees. It will also foster interdisciplinary collaboration between the visual arts, theatre and music.

“The Department of Art was one of the original eight departments when UCA was established in 1907, and it remains a high priority for us as we look to the future,” said UCA President Houston Davis. “Today, more than 250 students major or minor in art, and another 750 major in the other fine arts and communication areas. Student enrollment for all departments has remained at capacity for the past decade. This gift will allow us to fulfill the facilities and scholarship needs that are worthy of our outstanding faculty and students. We will be able to help more students earn degrees in art and related disciplines, while also graduating a workforce of creative problem solvers, critical thinkers, and independent learners. We thank Windgate Foundation for their partnership and incredible show of confidence in UCA’s vision for the arts.”

“Windgate Foundation has supported visual arts, contemporary craft and art education programs in the United States for 25 years,” said Patricia Forgy, executive director of Windgate Foundation. “For almost 20 years, we have proudly partnered with UCA and are delighted to continue our support for their new Fine and Performing Arts Center. The faculty and administration are supportive and enthusiastic, and we know this improved facility will be a great benefit for the students.”

A total of $19 million of the gift will be used for the new construction. The remainder of the project will be funded through additional private gifts and other resources, for a total estimated cost of $45 million. The remaining $1 million from Windgate will be added to the current Windgate Scholarship Fund, which was established within the UCA Foundation in 2005.

The Windgate Scholarship Fund at UCA supports full-time or part-time students majoring in art, based on talent and financial need. With the exception of entering freshmen, recipients of the scholarships are nominated by individual art faculty members and selected by vote of the full-time faculty. Since the fund’s inception, 30 students have been awarded a total of more than $400,000.

“UCA already has arts programs in place to become the university-of-choice for pursuing a professional path in the arts,” said Terry Wright, Dean of the College of Fine Arts and Communication. “A new Fine and Performing Arts Center will fully leverage the resources and talent of the University for the good of program expansion, campus enrichment, and community development like no other opportunity will.”

“Now, more than ever, UCA is committed to strengthening the future of academics, scholarships, student life, athletic achievements and facilities,” said Dr. Kale Gober, vice president of Advancement. “This raises the baseline for UCA. It puts us in a different league. This lead gift during the initial phase of our comprehensive capital campaign signals to all that now is the time to invest in UCA.”

The gift will also solidify UCA’s position as a regional leader of the arts, said Wright. “Some of UCA’s most strategic accomplishments in the arts include: founding the Arkansas Shakespeare Theatre, which is the only professional Shakespeare repertory company in the state; progressing toward All-Steinway school status, an achievement of only 118 schools globally; and offering acclaimed courses and terminal graduate programs one can only find at UCA.”

The Windgate Center for Fine and Performing Arts will be situated at the corner of Donaghey and Bruce Streets and will serve as a cornerstone of the campus that encourages participation in the arts and provides a unique experience for students, faculty and visitors.

“This new project is much more than a building,” said Davis. “It is a necessary and pivotal step in our ongoing efforts to transform lives and make an impact in Arkansas and beyond.”