Is the federal public corruption probe delving into the judicial branch? I think so. But my efforts to unearth records to demonstrate this ultimately produced a decision by the clerk of the Arkansas Supreme Court not to share any records that might exist.

When former Republican Sen. Gilbert Baker was indicted for bribing former Judge Mike Maggio to reduce a multi-million-dollar verdict in a nursing home negligence case, some related judicial angles developed. Maggio said he was induced to lower a verdict by campaign contributions from Michael Morton, a nursing home owner who has not been accused of a crime.

The indictment also noted that Morton had used Baker as an intermediary for nearly a quarter-million in campaign contributions to judicial candidates and other entities. The biggest beneficiary was now-Supreme Court Justice Rhonda Wood, who got $48,000. (The indictment didn’t name Morton or Wood specifically but made references to them by pseudonyms that made them readily identifiable.)

Recipients of texts between Maggio and others at the time he reduced the nursing home verdict by $4.2 million included Morton and Wood. The indictment alleges no impropriety against Wood or Morton. Morton’s contributions were a matter of public record. Wood issued a statement after the indictment saying she had cooperated with authorities and had even tried to obtain copies of her texts from investigators to demonstrate she had clean hands. She said she couldn’t remember what they might have said.

Wood had once sent comments to me about her contributions from Morton and her friendship with Maggio as a judicial colleague in Conway. He had planned to run for of appeals seat the year she ran for Supreme Court until his legal troubles developed.

She said then she didn’t recall discussing the nursing home case with Maggio, now serving a federal 10-year sentence and believed to be giving cooperation to the feds in its ongoing probe, which just produced Baker’s indictment. She said she had a standing order to recuse from cases from Maggio’s court because of her past association with him. And she said she recused from nursing home cases for a period of time, but lifted that recusal order “as sufficient years have passed.”

In addition to the semi-blind references in the Baker indictment, I had other reasons to believe the feds remained interested in judicial actions related to this investigation. They are known to range wide. Earlier, they subpoenaed records of the Bureau of Legislative Research, likely related to the element of the sprawling public corruption probe that focused on state money directed to recipients who made kickbacks to legislators.

Based on those circumstances and a tip the feds were still information gathering, I submitted an FOI request to Stacey Pectol, the clerk of the Arkansas Supreme Court, for copies of subpoenas or any other recent records requests from the Justice Department related to appellate court judges and any responses to those requests.  I specifically mentioned records related to judges’ recusals.

She responded to my FOI:

I understand your request to be for subpoenas recently issued by the federal government concerning recusal information of Arkansas appellate judges and any responses thereto. To the extent that any such subpoenas and responses exist, they would be exempt from public disclosure pursuant to the Arkansas Freedom of Information Act, Section 25-19-105(b)(4), (b)(6), and (b)(8).

I took exception. I noted as to the law she cited:

It is impossible for you to be in possession of grand jury minutes. Thus any documents in your possession can’t be withheld for that reason. That they might resemble minutes of a federal Grand Jury is immaterial to the FOI request.

I’d note that when I requested subpoenas from the same public corruption investigation delivered to the Northwest Arkansas Economic Development Commission, that Commission provided me with copies of the subpoena.

I’d add extraneously that this investigation HAS been disclosed.

(8) Documents that are protected from disclosure by order or rule of court;

What court issued an order protecting records in the possession of the Arkansas court clerk’s office? Might I get a copy of that order?

I urged Pectol, too, to consider transparency. Even where exemptions are possible, they are not necessarily mandated.

She agreed to consider the matter further. Today, she responded:

I am responding to your re-asserted FOIA request as Clerk and custodian of court records for the Arkansas appellate courts. I have given your request considerable thought and deliberation, and I have sought legal counsel as well. My response is my own decision as custodian based on advice of counsel and has not been directed by either appellate court.

Upon further consideration, I stand by my original decision that, if I were to have any federal subpoenas and responses thereto, those records would be exempt from public disclosure as records relating to an undisclosed or ongoing law enforcement investigation. I understand that you think differently and assert that this exemption only applies to the law enforcement agencies themselves. However, the Attorney General has opined that this exemption also prohibits disclosure of documents “in the hands of law enforcement agencies as well as other governmental officials or employees who possess the record.”

I believe the foregoing Attorney General’s opinion provides a good faith basis for my assertion of the exemption. Therefore, if I were to have any federal subpoenas and responses, I believe I would be prohibited from providing any such records to you.

Thank you for your continued patience as I pondered your request.

I still disagree. This investigation was disclosed long ago.

However, I think it likely my source was onto something in asserting the feds have been searching judicial records. That, I’d quickly add, is not proof of wrongdoing. I am still seeking to receive records maintained of recusal orders and requests.

Opposition from the attorney general to opening records maintained by the clerk of the Arkansas Supreme Court did remind me of some recent Twitter pix, one featuring Republican Attorney General Rutledge with her friend Justice Courtney Goodson, herself a recipient of significant nursing home money in her first race for the court: 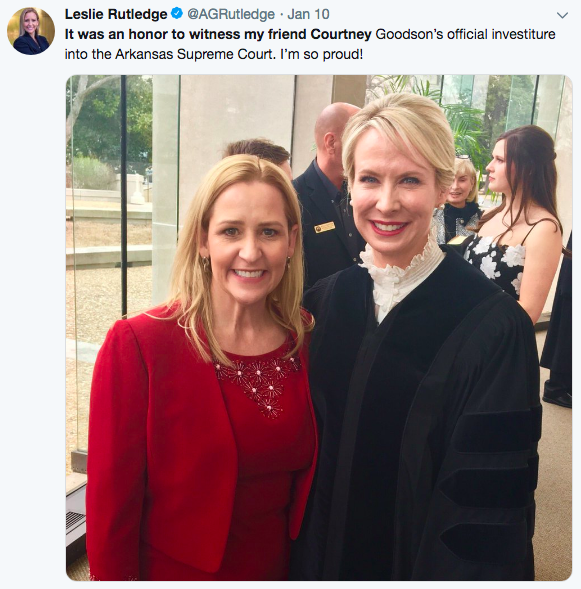