The American Atheists, challenging Sen. Jason Rapert‘s blocking of critics from his social media pages, says Rapert is either incompetent or misleading in telling a federal court that his pages are his private business and can be managed as he likes.

The lawsuit challenges Rapert’s blocks as a First Amendment violation, an argument that has been waged successfully against thin-skinned public officials in other states.

In a release today, along with a motion filed for a preliminary injunction, the group laid out its case that Rapert is acting as a senator in operating Twitter and Facebook pages.

“Countless pieces of evidence disprove Rapert’s claim,” said Litigation Counsel Geoffrey Blackwell. “If he believes his accounts are personal, he must be defining the words ‘official’ and ‘personal’ in a manner with which I am unfamiliar.”

Blackwell points to countless examples of Rapert using his “Sen. Jason Rapert” Facebook page, one of the social media platforms at issue in this litigation, as a public forum to discuss important policy matters with his constituents and seek their input. Until January 4, 2019, the “Sen. Jason Rapert” page even said, “This page is for communication with constituents and citizens.”

Rapert also uses the @JasonRapert Twitter account to communicate with his constituents. He has sought feedback from them on potential bills, tweeting that “constituents asked me & I asked constituents.” He has also affirmed that “responding to constituents is a part of the job description.”

In addition, Rapert has streamed at least 29 videos from Arkansas State Capitol facilities to which he has special access due to his elected position. This includes at least 28 videos from his own Senate office and at least one video from the Arkansas Governor’s Office during a bill signing.

“Like digital town hall meetings, these accounts serve as instruments of his Arkansas Senate office,” Blackwell continued. “On both Facebook and Twitter, Rapert performs duties intrinsic to his role as a state legislator. By shutting out his atheist constituents, he is preventing them from engaging in forums for discussion and debate, from being active citizens.”

“Rapert is either incredibly incompetent or intentionally misleading the court when he claims he’s using social media for personal use only,” said American Atheists President Nick Fish. “Anyone who spends more than 30 seconds on Rapert’s social media accounts can see that he uses them for official purposes.”

The motion for a preliminary injunction against Rapert includes dozens of images in support. For example: 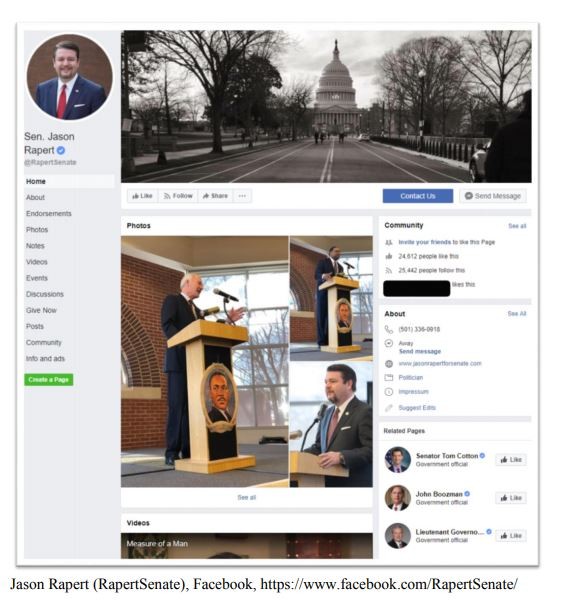