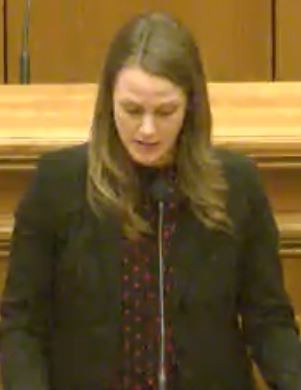 The House today completed action on a bill to virtually ban abortion in Arkansas should Roe v. Wade be overturned. The vote on the so-called trigger bill was 72-20, with eight not voting.
✖
Here’s the roll call.

The bill allows abortion only to save the life of a mother. It would appear to allow  of a so-called morning-after pill within a short period after intercourse. It would make a felony of providing an abortion. The woman would not be charged.

Rep. Mary Bentley carried the bill in the House for Sen. Jason Rapert, the primary sponsor, and ran through the litany of ways the state had tried to discourage abortion and define “personhood” from conception. She grew emotional in talking of working at Children’s Hospital and encouraging people to never give up in the face of difficult survival odds.

Rep. Megan Godfrey (D-Springdale) said she recognized many would vote in support of the bill as an article of but said the bill was “dismissive” of the pain of many women.  The bill also drew one Republican opponent, Rep. Dan Douglas of Bentonville, who said the bill didn’t provide for exceptions for rape or incest or for cases of severe fetal deformities that sometimes aren’t discovered until late in a pregnancy.

“When it hits your own family it takes on a totally different meaning,” Douglas said. He talked of a niece with such a case and the difficulty of carrying to term when a child has no chance to survive. “There’s something called humanity and stopping suffering. This bill goes too far.”

“Who are we to sit in judgment of their decision,” Douglas said, his voice rising as he added, “Or their God above!”

He said, “It is their right to do that and not ours.”

“Today the Arkansas General Assembly carried out another extreme and unnecessary attack on women and their health. Deeply personal medical decisions should be made by women in consultation with their families and doctors – not dictated by politicians. This heartless ban would force a woman to continue a pregnancy even when it would endanger her health, or resulted from rape or incest. Criminalizing abortion will not make it more rare, just less safe. If Governor Hutchinson allows this unconstitutional intrusion into a woman’s private medical decisions to become law, the ACLU of Arkansas stands ready to defend Arkansas women and their reproductive rights.”