In a bizarre meeting of the Little Rock Board of Directors that ended abruptly when police hurriedly escorted attendees out of the building, the board voted 7-2 to pay Mayor Mark Stodola $160,000 for unused time off. Scott wouldn’t say what was going on at the time, Fox 16 News’s Donna Terrell said she spoke with the Little Rock Fire Department, which told her, “a man called the non-emergency line saying he had a shotgun and would take hostages and shoot people.” 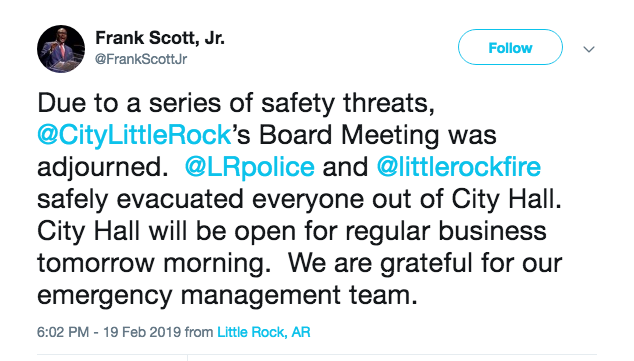 In December, Stodola claimed he was entitled to 2,281.23 hours of vacation pay and 211.73 hours of sick leave for a total of $191,789.23. City Director Joan Adcock and Vice Mayor B.J. Wyrick voted against the resolution.

Adcock said Stodola had brought unused time off out of the blue in the course of explaining her “no” vote:

“This was a new number that the mayor came up with at the end of the year. This was not a number that we ever looked at for [City Manager Bruce Moore] or the mayor, and I have a real problem that we are sitting here tonight spending $160,000 that we never heard about in the years that Mark Stodola was the mayor of this city, but at the end of his tenure, we hear about these hours,” Adcock said. “My vote will be no because I do not believe that the city owes this money and I will not be spending this money.”

Scott also shared dates for the community forums for the four candidates for LRPD police chief. All of the forums will take place at the Kendall Nugent Center at Philander Smith College and are scheduled as follows:

Mayor Scott also announced the appointments to a study group on the form of government with representatives from each ward.