At the first of four community forums at Philander Smith College with candidates for the Little Rock police chief’s job on Monday evening, finalist Todd Chamberlain emphasized the importance of “setting standards” for the training of new police recruits to prevent excessive use of force and police misconduct.

Acknowledging the controversial no-knock arrests by police under former Chief Kenton Buckner, Chamberlain, a retired commander of the Los Angeles Police Department, said there was a need for de-escalation training and the implementation of more non-lethal force options for the department, such as bean bag rounds.

“You don’t have to kill somebody,” he said. “You can use something to stop their actions and their behavior. It doesn’t work for every situation, but the fact that that tool isn’t out there right now is something I find a little alarming and is something I would like to rectify.”

Chamberlain, a 33-year-veteran of the police force who worked in SWAT and emergency operations, stressed the need for “partnership” between law enforcement and the communities they police. “I saw law enforcement where we thought we were doing a great job and crime was down,” Chamberlain said during his hour-long talk to an audience largely made up of people of color. “[But] we never reached out to the community, we never talked to the community. … We would do things that would have an impact on crime, but you know what else that did? It made the community despise law enforcement because of how we achieved that number.”

Chamberlain also said he supports body-worn video for officers as both a method of transparency for officer-involved shootings and as a de-escalation tool in its own right.

At a question-and-answer follow-up, former mayoral candidate Vincent Tolliver asked Chamberlain about a civil lawsuit filed in 2013 against by an officer with the LAPD against the department that cited Chamberlain for neglecting to report racist incidents within his department. Earl Wright, the officer who sued, was awarded $1.3 million by the city of Los Angeles. Chamberlain said the unit in question had a “business practice” that was unethical, referring to a climate of jokes and a “way of doing things to each other.”

Also in response to a question from Tolliver about a stand-your-ground bill being discussed by the legislature, Chamberlain said the policy is part of an “unfolding legality issue” and that law enforcement does not institute laws, so the adoption of it will be based on “what the courts come up with.” 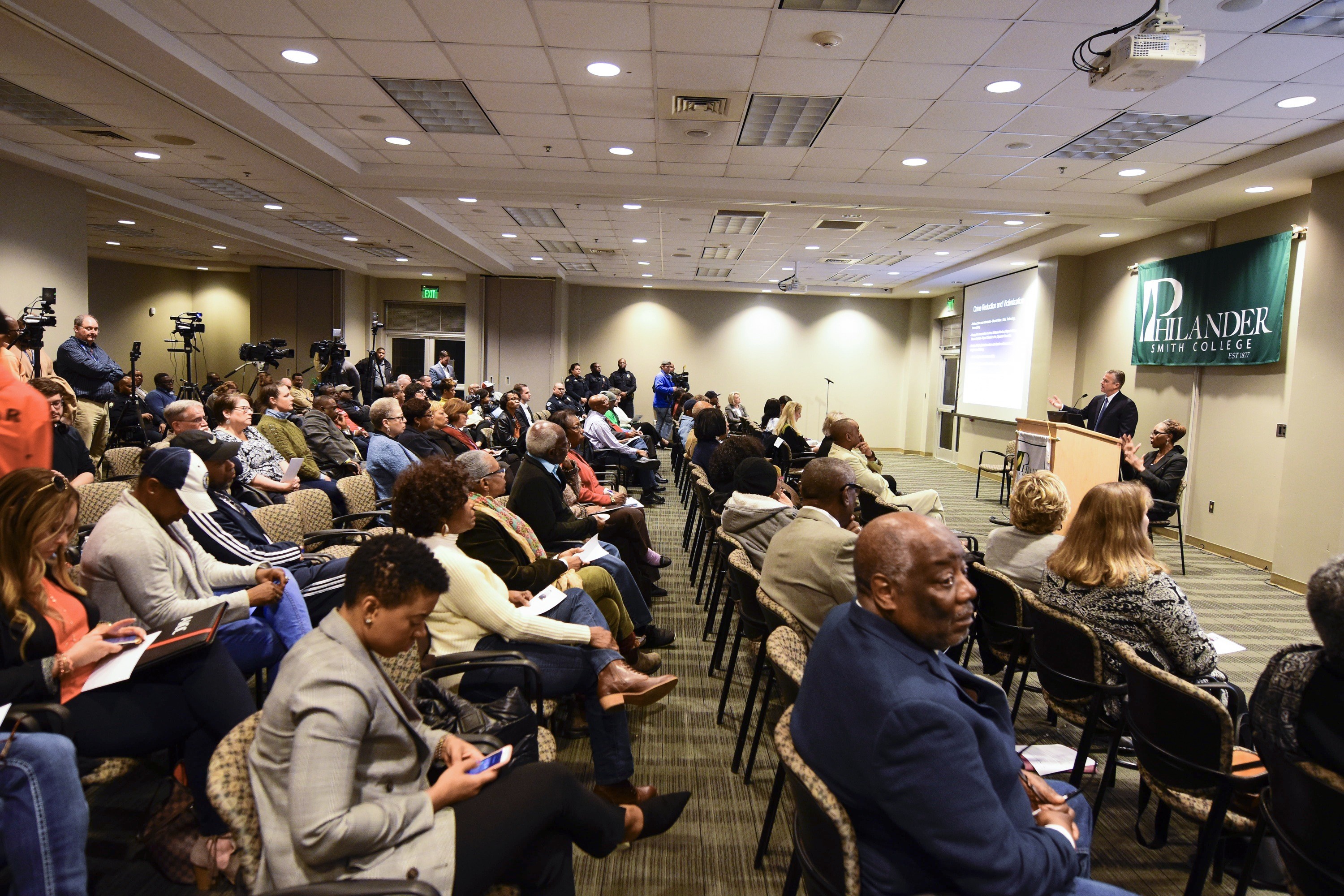 Roderick Talley, the plaintiff in a lawsuit against the city of Little Rock over abusive police practices in drug raids, asked Chamberlain to be more specific on his stance on no-knock searches and how he would discipline officers involved in misconduct.

“You did a lot of talking, but I don’t think you answered anybody’s questions,” Talley told Chamberlain. “I don’t care to be politically correct, I want you to give us a direct answer. If these officers aren’t doing what’s right, if they’re violating people’s constitutional rights, are you going to reprimand those officers? And not just for a couple of days, but take them through the same legal consequences that we have to go through? Because all it takes is an accusation for a regular citizen, but then the people that are supposed to protect and serve us are the ones violating us. So why do they get the benefit of the doubt, even when it’s caught on camera?”

Asked how he would translate his experience working in the significantly larger city of Los Angeles to policing in Little Rock, Chamberlain said the issues law enforcement faces are consistent across different communities.

“Who police deal with community members, and who police are, community members,” he said. “That’s one thing I really hope that everyone understands. Police officers are not made in some pods out in some ranch in Arizona somewhere, where they all of a sudden become police officers. They are society. These are the people, many here in Little Rock live in Little Rock, live in the community. And these are the people here that are a part of this community.”

Asked if he would support residency requirements for police officers working in Little Rock, Chamberlain said he would not. He commuted into Los Angeles for his former position and said law enforcement officers should have the same opportunity as other citizens to choose where they want to live. “If they come to work, if they’re productive, if they serve the community, I really don’t care where they live,” he said.

He said the department would need to set standards that do not allow racism “in the first place” and called for oversight of racist incidents when they do occur.

Former Chief Kenton Buckner left the force in November after four years. Other finalists for the job include LRPD Assistant Chiefs Hayward Finks and Alice Fulk and Norman, Okla., Police Chief Keith Humphrey. Finks will speak at the next community forum, 6 p.m. Thursday, Feb. 28, in the Kendall Nugent Center of Philander. The remaining two community forums will take place over the next two weeks.