In a press conference Tuesday afternoon, civil rights attorneys Ben Crump and Mike Laux shared an LRPD memorandum from a 2014 drug raid, which includes a portion that reads, “It is a mandate from the Office of the chief of Police that the SWAT team execute all search warrants.” Three new alleged victims of no-knock search warrants also came forward.

The memorandum, which Laux said is from a sergeant to a lieutenant within the LRPD, cites the reason for the SWAT team being used in the raid as “because many times guns and violence are associated with narcotics.”

Laux and Crump said this same vague language is used in all of the no-knock search warrant affidavits, and, as Laux said, “It doesn’t cut the constitutional mustard.” As the affidavit was from 2014, Laux said this mandate must have been present during the tenure of former LRPD Police Chief Stuart Thomas and continued through the tenure of former chief Kenton Buckner, who left the position in November after four years.

“The real question is, will it continue through the tenure of the next police chief?” Laux asked.

Laux then said he and Crump “could not be happier” with the “progress and promise” that Mayor Frank Scott Jr. has brought to the issue of no-knock search warrants. Scott said in a recent city board meeting that he’s “looking into” a no-knock warrant policy for the police department.

“His transparency efforts and his grabbing a bull by the horns … has been impressive,” Laux said. “We are heartened by the attention he’s giving these serious issues, and we certainly hope that we can accept what has happened heretofore, the warrants and the ugliness of it all, and only then can we turn a corner and start to grow. Not just as a city, but as a department.”

Crump and Laux represent several alleged victims of no-knock search warrant cases, including Roderick Talley, who filed a lawsuit against the city of Little Rock and several police officers after his door was blown in during a no-knock raid last year. Laux said he and Crump are still in the process of deciding whether or not to add other victims to Talley’s case.

At a recent city board meeting, Talley asked the city directors to take more action against the no-knock search warrants. Following Talley’s remarks, City Attorney Tom Carpenter said the tape containing footage of the raid on Talley’s home was edited.

At today’s press conference, Laux and Crump said the pair have had that same footage looked at by “independent experts” who say the tape shows no signs of being edited.

Laux then said he issued a written discovery in Talley’s case asking the city to provide “any and all evidence that they have or possess or are aware of” that substantiates this claim made by Carpenter.

“Certainly, there’s got to be some evidence for a claim like that to be made by a public official at a public forum about a matter of significant public concern,” Laux said. 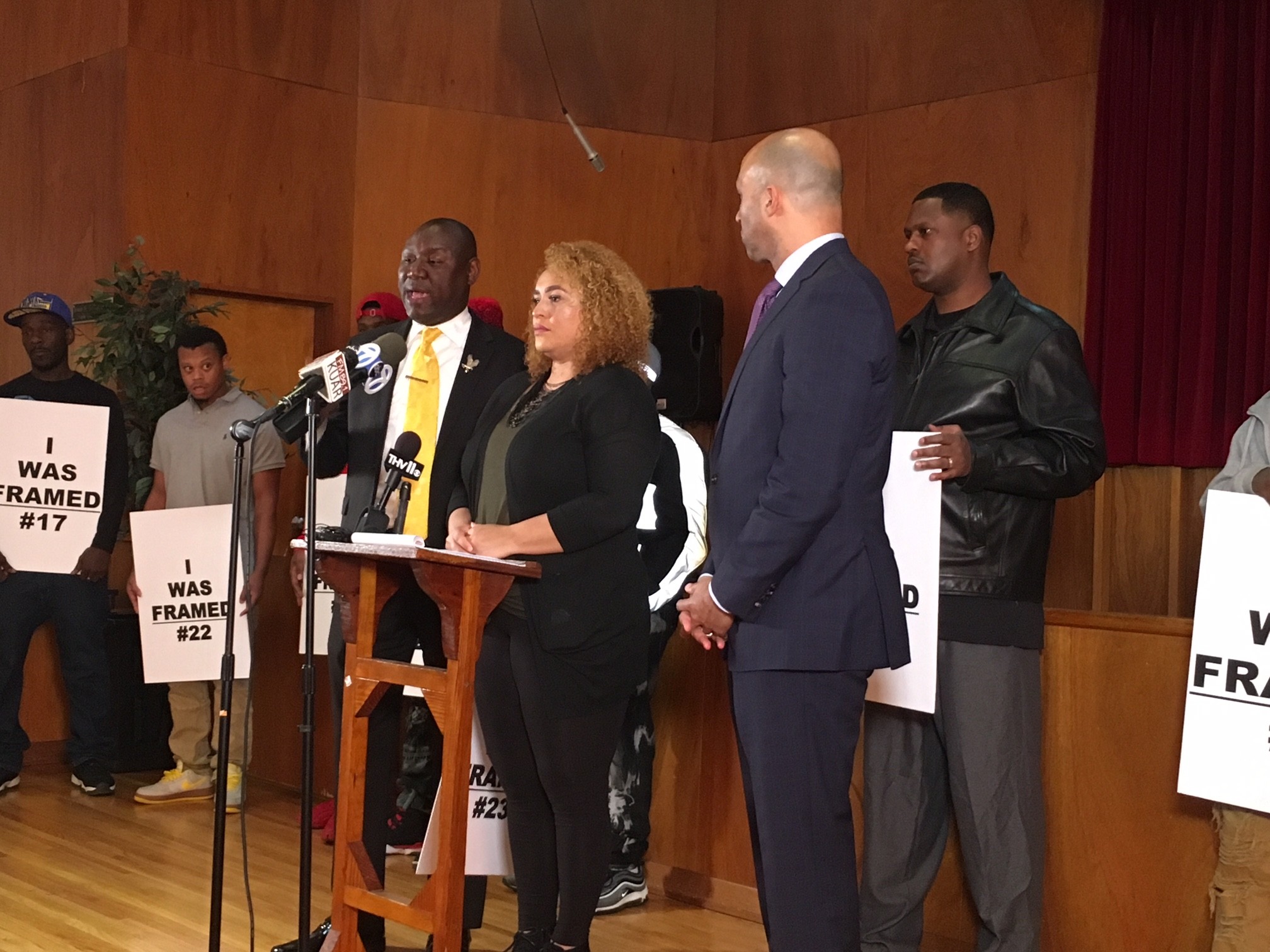 Reginald Harris, Simone Whitaker and Derek Smith each spoke briefly about no-knock raids conducted on their homes. In each of their cases, young children were present.

Whitaker described grabbing her pistol when she heard noises in her home and her dogs barking, indicating “something was wrong.”

“I thought that I was going to die,” she said, her voice cracking with emotion. “And then I hear, ‘Police! Search warrant!’ And I thought, oh my God, they’re going to kill me because I have my gun in my hand.”

“It goes to underscore the fact that they are just cutting and pasting [text in the warrants], and God knows, they don’t pick your house that day,” Crump said.

Laux said he has signed close to 50 clients who claim they are victims of the “unconstitutional, unnecessary” no-knock warrants. While the process of determining whether all of these claims are “credible” is still ongoing, Laux said between 20-23 of these 50 cases have been found to be credible, a term which he said includes “a person who had [no drugs in his or her home] and was never charged” or “a person who got pinched with a bag of weed, but there was no ton of meth.”

He also said that of those 50 or so cases, between 12-15 of them have had the charges dropped.