In the second community forum for Little Rock’s four police chief candidates, Little Rock Police Department Assistant Chief Hayward Finks spoke about his 31 years of experience within the department and shared his ideas for making the city a “great place for everyone to live.”

Finks began the forum, held on the campus of Philander Smith College, by reminding the audience of his connections to Little Rock. He said both his parents attended school at Philander Smith, as did his sister, and his mother operated a small cafe a few blocks from the college. Finks also said he is a product of the Little Rock School District and a “proud graduate” of Central High School.

He paused while speaking about being a finalist for the chief position, his voice wavering with emotion.

“Never in my wildest dreams would I have ever thought that I would be standing before you as a candidate to be the chief of police for Little Rock,” he said. This was met with applause from the audience, which was a significantly larger crowd than retired LAPD commander Todd Chamberlain’s forum on Monday evening.

Finks said he joined the LRPD in 1988 and was a part of the first gang unit in the department during the early ’90s. He added that he has served in an advisory role for 24 of his 31 years on the force, and this experience with leadership makes him “uniquely suited” for the police chief role. 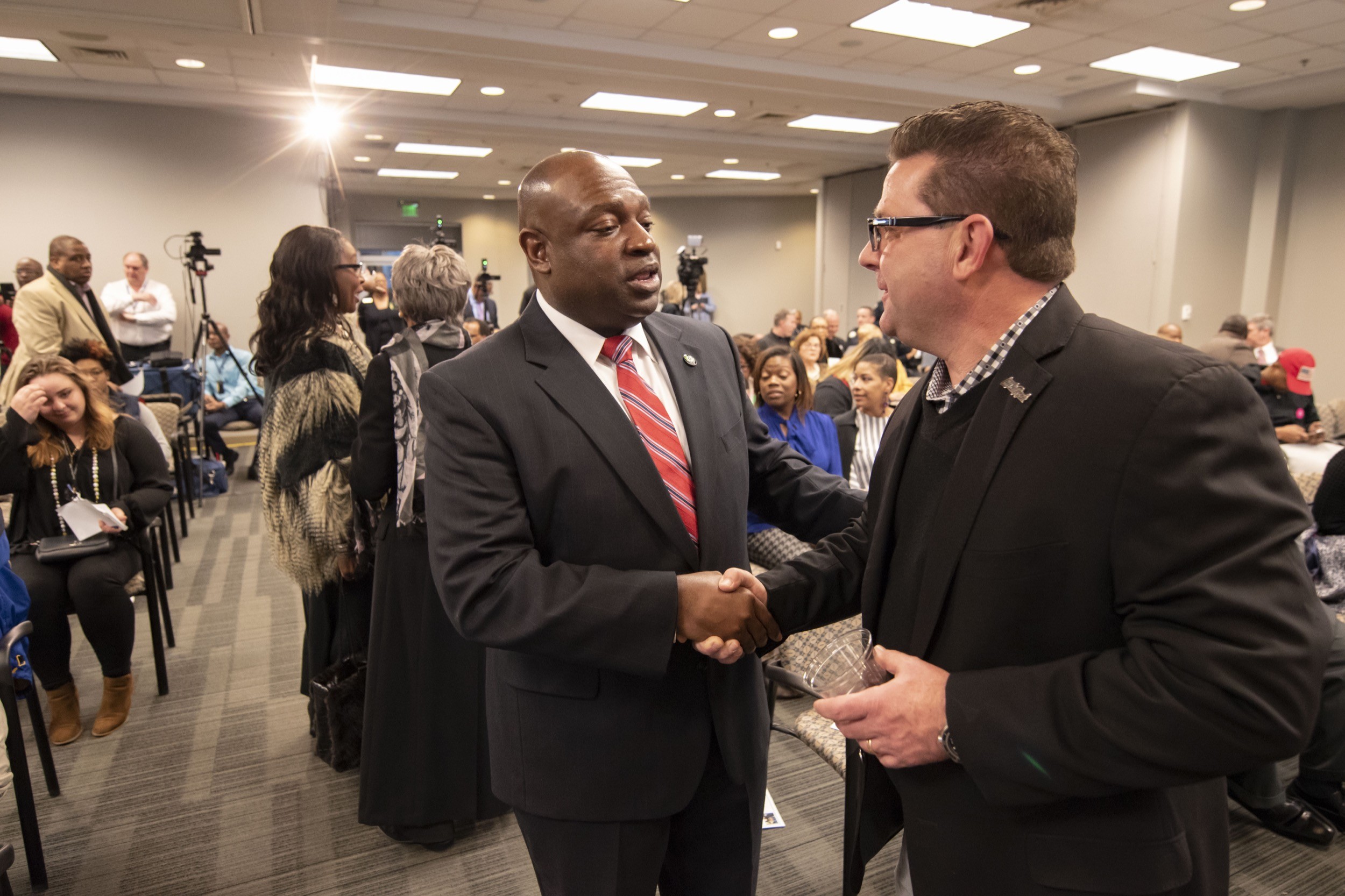 While Chamberlain gave his presentation for a full hour at Monday’s forum, Finks spoke for about 15 minutes about his goals to improve community engagement and the internal culture of the department, as well as his plans to reduce crime within the city.

Finks said his first step in improving community engagement would be to meet will all of the city’s associations to determine the “unique needs” of each.

In addition to community engagement, Finks spoke about the importance of the department “operating in the spirit of community policing.

Finks has previously defended the department’s practice of making so-called investigative traffic stops, where officers stop drivers for petty traffic violations as a means of potentially uncovering more serious crimes. The department concentrated the stops, which were likened to “stop and frisk” practices, in predominantly black .

At the forum, he said he tells new police recruits that he expects them to treat all citizens with “dignity and respect,” saying he encourages officers to imagine the people they interact with are their mother, sibling or child. 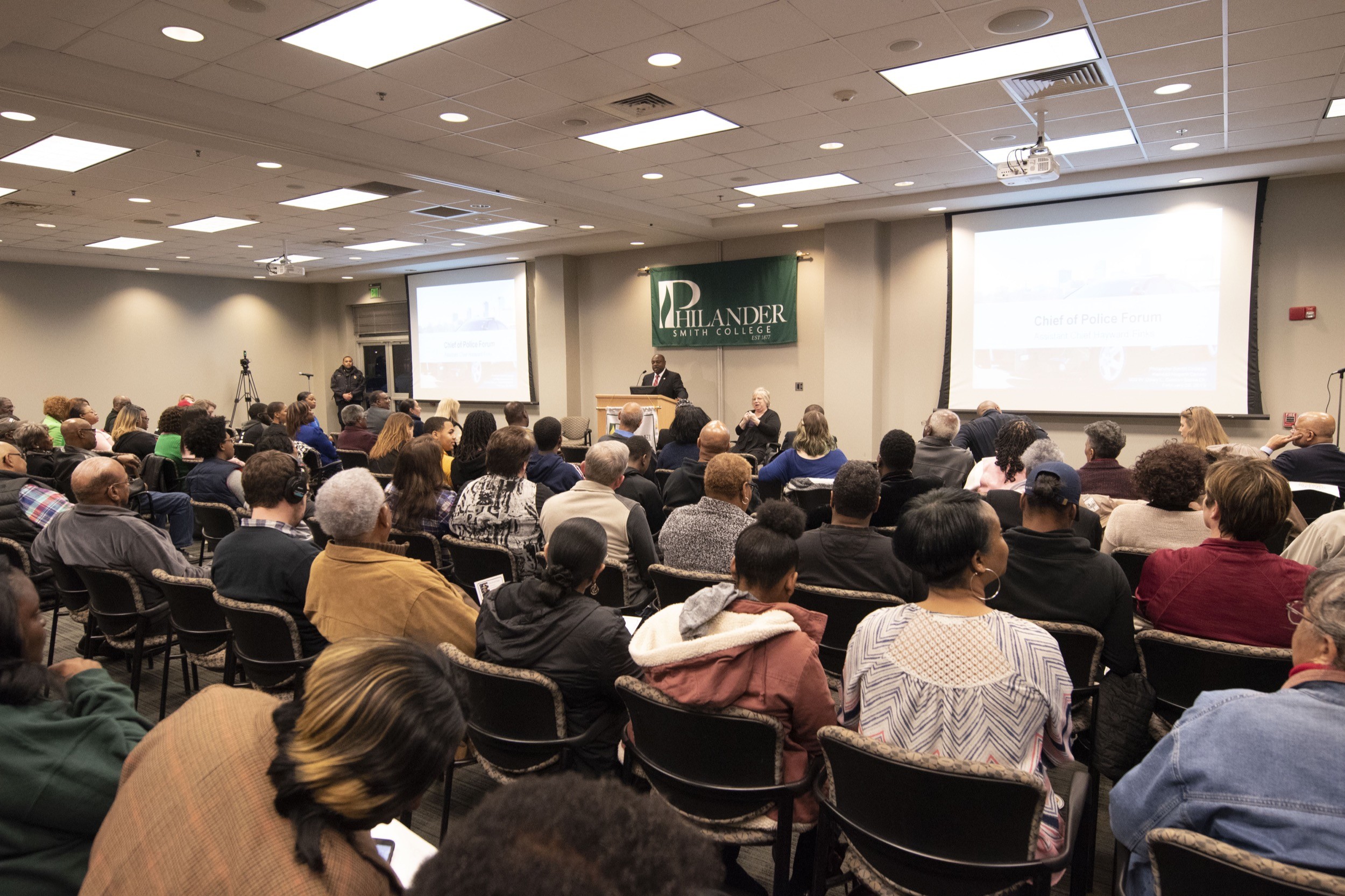 Key to Finks’s agenda for reducing crime is the establishment of “short term plan” to add 106 additional officers to the department, a goal similar to one shared frequently by Mayor Frank Scott Jr. during his campaign.

Finks fielded questions on diversity within the police department, racial tension among the ranks, the use of body monitoring video by officers and his opinion on residency requirements for Little Rock police officers.

Asked frequently about what he plans to do to increase diversity in the LRPD and ease racial tension among its officers, he referred several times to his initiation of meetings between the Fraternal Order of Police and the Black Police Officers Association in order to “work out problems and differences that we have within the police department.” He also said he was instrumental in the first meeting of leaders of the FOP and the BPOA with the mayor to talk about moving forward in “unity.”

Roderick Talley, the plaintiff in a case against the city and several LRPD officers over abusive police practices in drug raids, who also spoke at Monday’s forum, asked Finks about the no-knock search warrants served during his 30 days as interim chief of the department from Dec. 18 to Jan. 18.

“You mentioned building unity, trust and community policing, [but] I don’t understand how you’re doing that in the years you’ve been in office, you being somebody that’s from this city, seeing how bad the people that you’re in control of or that you supervise are terrorizing this city,” Talley said. “You put the powerpoint together and basically explained every bulletin, reiterating the same point in a different way, and I just want to know why you think you deserve the opportunity to be chief, when you were given 30 days [as Interim Police Chief] and eight no-knock search warrants were served in the 30 days that you were officer. … So what are you gonna do if you get the opportunity?

Finks responded, saying that he did not begin preparing to be the chief of police when the interim chiefs were announced a month ago, but rather when he joined the police force as a cadet in 1988.

Shortly after Talley’s question, the forum was interrupted by a protestor who entered the back of the auditorium and demanded the release of video from last week’s fatal shooting of Bradley Blackshire by LRPD Patrol Officer Charles Starks. Finks and the questioner at the microphone ignored the exchange as officers removed the protestor from the building.

Later asked a question about the use of motor vehicle recorders by police officers, Finks said those recorders are older technology, and body-worn cameras are the “direction that most progressive police departments are going in.” He said he supports them as a tool to “build trust and legitimacy with the community,” but the department has not implemented them yet because of the costs of the cameras.

A question submitted through the live streaming of the forum on Facebook asked Finks if he felt the police department was capable of investigating itself in cases of police misconduct. Finks said he has been responsible for investigating officers in the past, and that this “shows our department is capable of policing ourselves,” but the department should take advantage of opportunities to look at “best practices” of other cities to implement.

Similarly to Chamberlain, when asked his stance on residency requirements for Little Rock officers, he said while he agrees with Mayor Scott that more police officers living in the city would be better for the city’s tax base, he does not support a residency requirement, but would rather support creating more incentives for officers to live in Little Rock, including by awarding points to police applicants in the hiring process if they live in the city.