In a press conference Monday afternoon, civil rights attorney Omavi Shukur, representing the parents of Bradley Blackshire, shared details of the family’s “preliminary” investigation into Blackshire’s fatal shooting death on Feb. 22 by LRPD Officer Charles Starks and asked the community to come forward with any information or video footage of the incident by calling the attorney at 312-243-5900.

Shukur, who is an attorney with the Chicago-based Loevy & Loevy civil rights law firm, said the family has seen “nothing that indicates” that Blackshire knew the car he borrowed the day of the shooting was stolen.

“What we do know is that Blackshire lawfully turned into the parking lot, backed into a parking space, and within seconds, was looking down the barrel of Starks’s gun,” Shukur said. “ Blackshire was not given the dignity of being treated as if he was presumed innocent of the nonviolent crime that he was suspected of committing.”

According to Shukur, the car “crept slowly forward” for approximately five seconds as Starks backed away from the vehicle.

“The car was moving so slowly that when the fender of the car made contact with Starks’ left thigh, Starks did not fall to the ground,” Shukur said. “Starks remained standing and the car immediately stopped upon making contact with Starks’s left thigh. … When the car initially came to a stop, Starks did not move towards the driver’s side door and demand Blackshire to get out of the vehicle. Instead, Starks foolishly stepped in front of the vehicle and shot Blackshire repeatedly. The car then rolled slowly towards the back of the parking lot.” 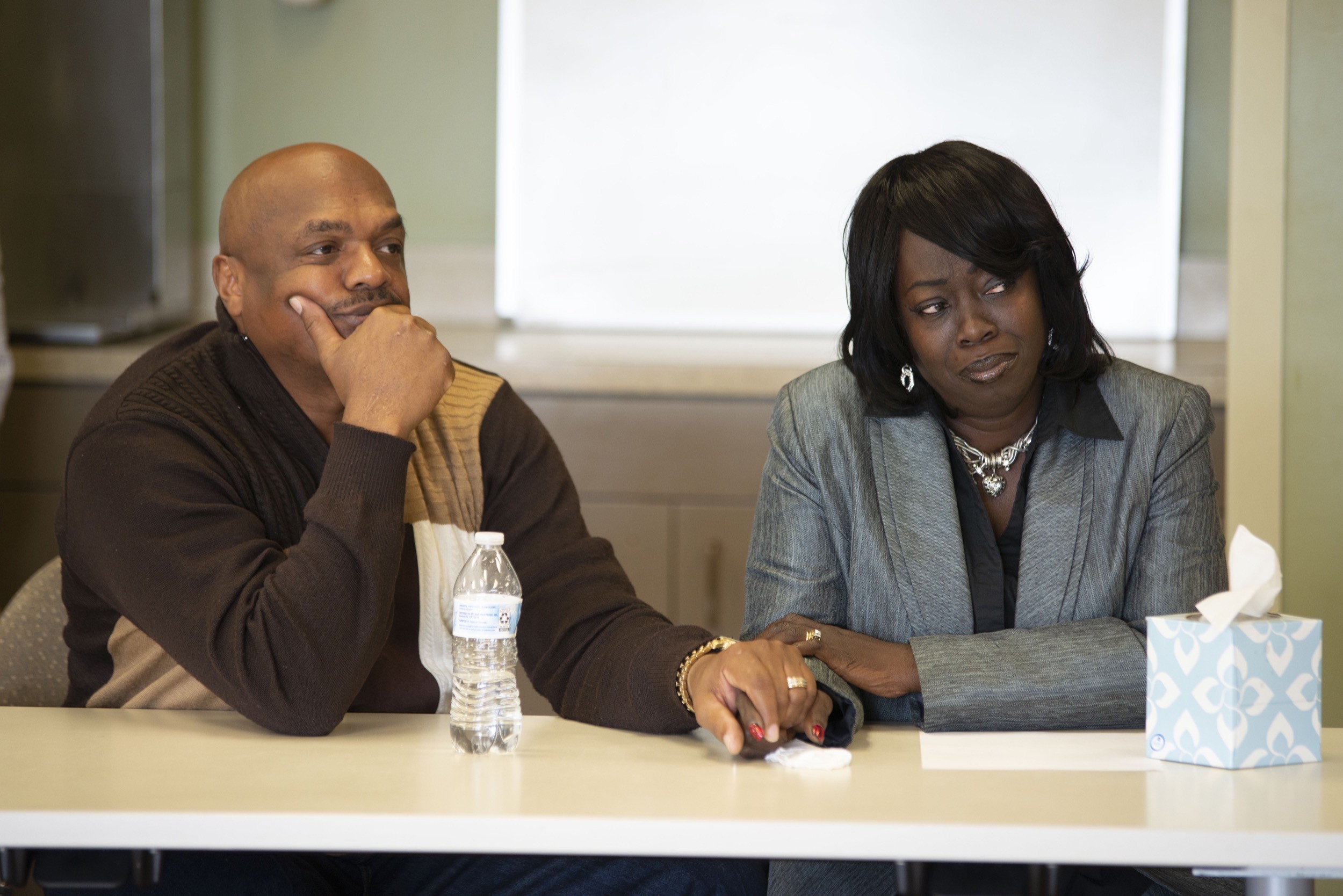 At this point, Blackshire’s mother, Kimberly Blackshire-Lee, began openly crying while seated next to her husband, Deangelo Lee.

Shukur said the car then remained motionless for 10 seconds “while neither of the officers at the scene in the car’s path” before Starks fired into the car once again. The car continued to roll to the back of the parking lot, and “ Blackshire’s lifeless body was unceremoniously placed on the ground, shirtless and in the rain, his body riddled with bullets.”

“You will see a video of this murder, and in this video, you will not see an officer who was scared for his life,” Shukur said. “Instead, you will see a predator who stepped in front of a car to kill his prey. But what Starks will soon realize is that Blackshire was not his prey. He was a brother. He was a father of five. He was a son. He was the loved one of a family that now has the determination, the resources, and the will to zealously prosecute the unlawful, unconstitutional and criminal actions of Starks.”

Dash cam video from the shooting has not been released yet, but in a statement shared on the Little Rock Police Department’s YouTube channel, Interim Chief Wayne Bewley said the department hopes to release the video by the end of this week.

Shukur said Blackshire’s family has demanded the city turn over “all audio and video recordings of the incident, all completed reports, and all statements made by the officers involved,” but they have not received any of these materials. 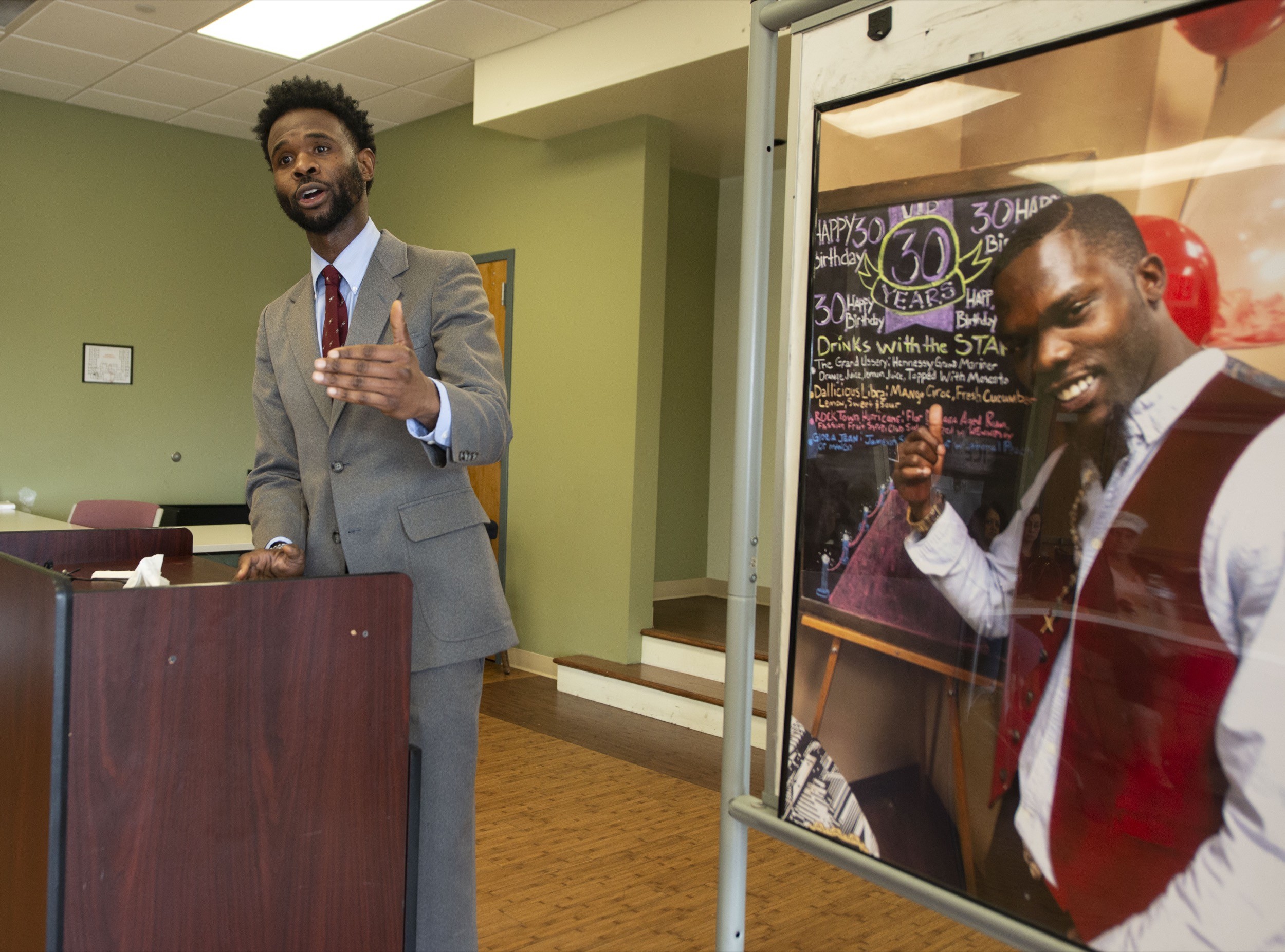 The family is also calling for Arkansas State Police to “conduct a complete, transparent and unbiased investigation of Blackshire’s murder, as the LRPD should not be the sole investigator of the homicidal actions of one of their own,” Shukur said.

State Police spokesman Bill Sadler told the Arkansas Democrat-Gazette the only way State Police would get involved in the investigation was if the LRPD interim police chief or the Pulaski County prosecuting attorney asked for assistance. Neither had done so on Monday, Sadler said.

Blackshire-Lee spoke through tears about her son, saying he was an “advocate for other people” with a “genuine heart.” Her voice cracked as she spoke Blackshire’s 2-, 3- and 5-year-old children seeing their father at his funeral.

“When they saw him laying in that casket … they believed their daddy was just sleeping and somebody needed to wake him up,” she said. “How do you explain to them that you can’t wake him up? That he’s not coming back? And how do we go from here, explaining to them what has taken place?”

She added that no one from the city or police department has contacted Blackshire’s family about seeing a psychiatrist or therapist to “help the family through this.”

“Where is the support that they say that the police has in place for mourning families?” she asked. “I’m a taxpayer. … This is where our dollars go, but we’ve not seen any of these resources that they say are in place for families. I can only imagine what all of the other families have [gone] through. I’m just calling on our community leaders, somebody, help us. Somebody give us some answers, because we don’t have any, and nobody seems to want to give us any.”

Deangelo Lee closed the press conference by saying that “in America, you’re guilty until proven innocent. So many lives have been taken by individuals that are brought into our communities to serve and protect our communities.”

“This could have been one of your family members,” he said.