Humphrey served as chief of police in Lancaster, Texas, from 2008-2011 before becoming Norman’s police chief. Humphrey said he would have applied for the Little Rock police chief position when it was last open in 2014, but he’d made a five year commitment to stay at the Norman police department, and leaving the position early would mean he would have “gone against his word” and “lied to the community.”

During his half-hour presentation, Humphrey said that the LRPD lacks a “vision” for the department, and, if selected as the next Little Rock police chief, he would begin by reviewing the LRPD’s procedures and policies and making them publicly available to citizens on the department’s website.

“I do believe that citizens should be able to pull up a policy and see if the department is doing the right thing,” he said.

Humphrey spoke of the importance of both ensuring citizens understand how to file complaints against police officers and having each of these complaints reviewed in order to build trust and legitimacy between officers and the community. He also said he would support the establishment of a citizen review board and officers’ use of body-worn cameras.

As part of the changes he would make to the department’s policies and oversight, Humphrey said he would evaluate the LRPD’s no-knock search warrants and establish a “threat matrix” to consult when warrants are served.

In to place more importance on the mental and emotional wellness of officers, Humphrey said he would evaluate the 12-hour shift cycle currently in place in the LRPD, saying that 8, 9 or 10 hours shifts are “a lot better,” in addition to monitoring officers’ off duty employment.

“You can’t have officers out here working 100 hours a week off duty,” Humphrey said. “We understand officers work off duty, but I can guarantee you, there are some officers who work [an extreme] amount of hours, which affects their performance and their wellness, emotional and physical.”

In closing his presentation, Humphrey said he would not be shy to make changes in the department, saying he doesn’t work well “under quo.”

He added that an important part of his changes would be to establish regular meetings with both the Fraternal Order of Police and the Black Police Officers Association. 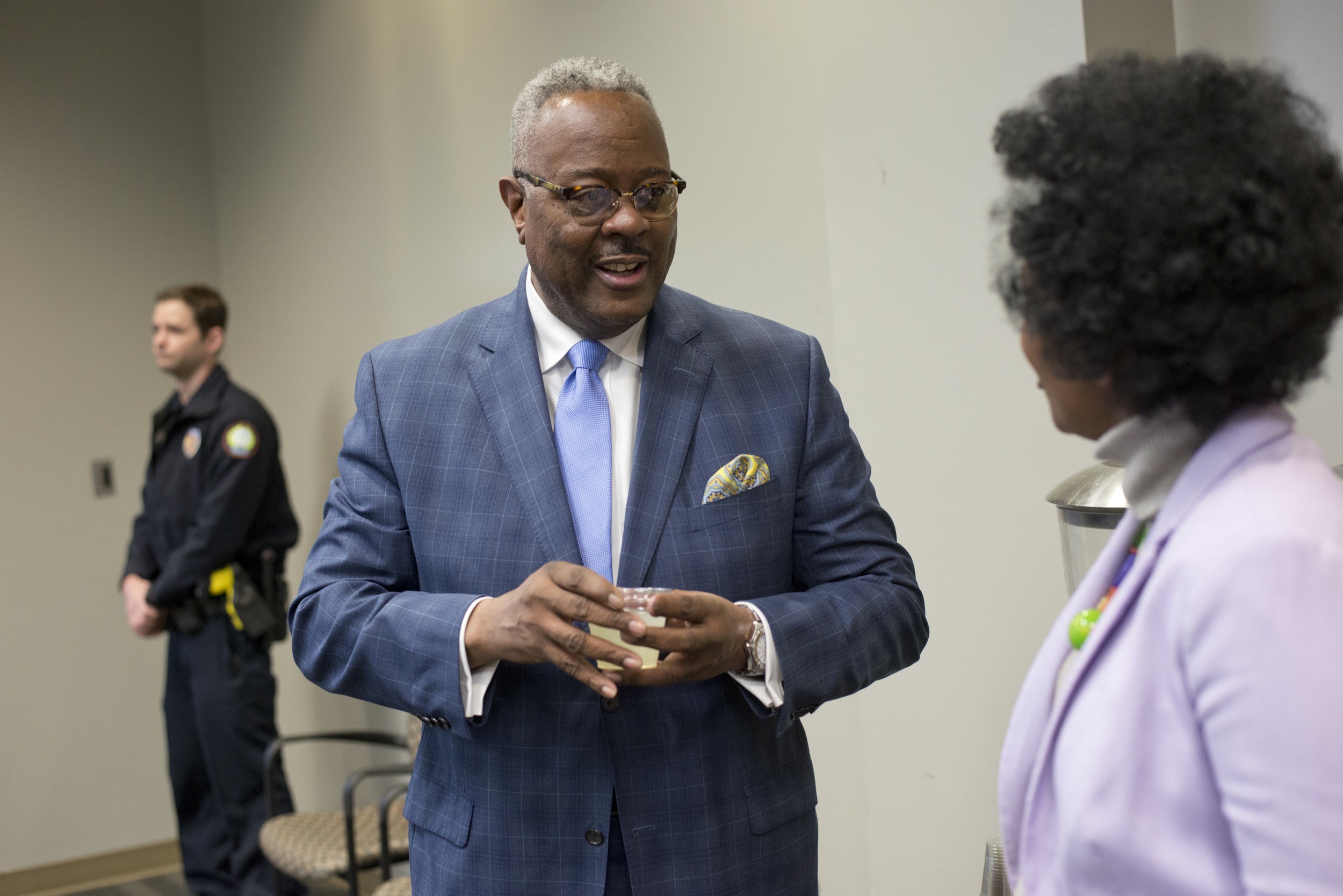 During the question and answer portion of the forum, a smaller crowd was present at the previous two forums asked Humphrey questions about residency requirements for officers, his plans to reduce crime, his experience with officer-involved shootings and combatting racism within the department.

Taking a firmer stance than retired LAPD Commander Todd Chamberlain and LRPD Assistant Chief Hayward Finks, Humphrey said that, while he would not support residency requirements for all LRPD officers, he would require officers who desire take-home vehicles to live within the city limits, saying this is an “important part” of 21st century and community policing and crucial to “being good stewards of taxpayers’ money.”

Asked how Humphrey intends to reduce crime in the city, he said “reform” in the department and the state legislature would be crucial to reducing the state’s recidivism rates.

“We can’t arrest our way out of everything,” he said. “We have to look for ways to ensure that people have their rights. Once you pay your debt to society, that’s one area, but how are we helping you get back into society?”

He added that in Norman, he helped establish a community outreach program that sets aside funding to help people experiencing homelessness get driver’s licenses, social security cards and birth certificates free of charge, in addition to helping folks access veterans or social security benefits. “We have an obligation to provide resources,” he said.

A question submitted through the live streaming of the forum on Facebook asked Humphrey about his experience with officer-involved shootings. Humphrey said to “keep in mind that every officer involved shooting is different” and that there’s no “blanket way” to cover them. He then referenced a June 2010 shooting in which a Lancaster, Texas, officer died in the line of duty. The officer was killed by the son of the police chief of Dallas, and another Lancaster police officer, in turn, shot and killed him. Because his officers were so “attached” to those involved in the incident, Humphrey said the department asked the county to do the investigation instead.

“You want to trust your people, but if it gets to the point where you feel like there’s too much of an emotional attachment, I’m not afraid to go outside and ask somebody to do the investigation,” he said.

He spoke about the importance of differentiating between the “hatred” of racism and “misunderstandings about ethnicity and culture,” he intends to require implicit bias training and Spanish-learning programs as well as training on interactions with disabled communities.

Humphrey was also asked by a woman who said she spoke for “all African-American fathers and mothers”: What, if hired, will Humphrey have done a year from now to make parents like her “less afraid” about their sons being stopped by police officers?

Murmurs of agreement rumbled through the crowd, and Humphrey answered, “Have I been profiled? Absolutely. Have I been pulled over by people that I work with? Absolutely. Did it upset me? Absolutely. But that’s where education comes [in], and you have to educate officers on why there’s a fear between the minority community and law enforcement.”

During his turn at the microphone, one man told Humphrey of Little Rock’s frequent turnover in the police chief role and asked what his commitment to the city will be.

“I can tell you right if I’m selected, my wife is not moving anymore,” Humphrey said. “I’m here for the long haul. I love this community.”

Humphrey then spoke about the importance of following through on commitments made to the community.