This post has been updated since its original publication.

The sponsor of a bill aiming to protect Arkansas tenants pulled it down for modification Wednesday morning after a lawyer from the Arkansas Realtors Association declared the group’s opposition and several members of both parties indicated they were skeptical of the proposal.

Rep. Jimmy Gazaway (R-Paragould) said his House Bill 1410 would “seek some balance between the rights of tenants and the rights of landlords” by establishing minimum habitability standards for all residential rental units. The bill has the support of grassroots groups fighting for renter protections.

HB 1410 would require that rental units be waterproof, structurally sound and have working locks, water, plumbing, electricity and venting heating systems. Units would be required to have a working smoke alarm and carbon monoxide detector. The landlord would be required to provide air conditioning if he or she had agreed to do so and to provide an outside trash receptacle for apartments if obligated by law or lease.

Arkansas is the only state in the country without an “implied warranty of habitability” for rental property. “We live in the richest country in the world,” Gazaway told the House Insurance and Commerce committee. “These minimum standards … I do not believe are too much to ask of a landlord in 2019 in the United States of America.”

About 1 million people in Arkansas are renters, he said — a third of the state’s population. Rental properties in cities likely wouldn’t be affected by HB 1410 because most cities have local building codes that are more stringent than the standards outlined in the bill. The measure would primarily affect property in rural areas or smaller towns that may not have building codes (or no code enforcement officer), Gazaway said.

“There are children in this state every night who have to go home to a house that their parents rent that have holes in the roof, holes in the floor; there are rats,” he added later. “There are deplorable conditions in some parts of this state.”

Lynn Foster, a professor at the Bowen School of Law who helped draft the legislation, presented the bill along with Gazaway. A landlord would be out of compliance only if the tenant’s health and safety or use of the premises is “materially affected” by a deficiency in one of the above standards, Foster said. “We’re not talking about a hot tub that’s not hot enough. We’re talking about something that is seriously affecting health and safety,” she said.

HB 1410 would give a landlord 14 days to address a problem if notified by the tenant in writing. That period could be extended in the event of inclement weather or other circumstances outside the landlord’s control. If the problem remained unaddressed, the tenant could then either terminate the lease or take the landlord to court.

The bill states the remedies wouldn’t apply “if the condition of the premises was caused by a willful or negligent act or omission by the tenant” or another person. “The point is, if the tenant destroys the property, then the landlord’s not responsible,” Gazaway said.

Foster said the bill also includes an “undue hardship” exception for landlords. If a tenant sued to force a landlord to make a repair beyond the landlord’s ability to pay — Foster gave the hypothetical example of a rural rental home that relies on well water, should its well run dry — the landlord could claim this defense, though he or she would have to prove it in court.

Most of the questions directed to Gazaway by members on the committee — both Democrats and Republicans — suggested they opposed the measure. That prompted Gazaway to pull down the bill at the end of the two-hour meeting. After the committee adjourned, he told reporters he hoped to bring it back next week after making changes.

Rep. Grant Hodges (R-Rogers) and other Republicans voiced worries the bill created a new tort liability for landlords. Gazaway said Arkansas law already states “a landlord owes no duty in tort to tenants,” and the bill explicitly reaffirms that statute.

HB 1410 would not make landlords newly susceptible to being sued for injury, death or damage to tenants’ personal property, Foster said — only for not maintaining the premises or making necessary repairs.

Gazaway said that most tenants would simply want to be released from their lease in such a situation. “The tenants in … 90-plus percent of cases just want to move out of [a] dangerous situation, and what this does is allows them to terminate the lease,” he said.

Later on Wednesday, a reporter asked Ferguson whether she believed the state needed new landlord-tenant legislation of any kind. “I don’t really think we do,” she said. Ferguson said she was not concerned Arkansas was the only state without an implied warranty of habitability.

“That never plays into it with me, what other states are doing,” she said.

Ferguson said she was concerned the bill could reduce the amount of housing available in Arkansas. When asked if a landlord should be able to rent a unit without plumbing or electricity, she said that “people see what they’re going to rent before they rent it. … If they want to rent a place that has none of those things, then I guess that’s their right.”

Ferguson said she is the landlord of a ten-unit apartment complex in West Memphis. 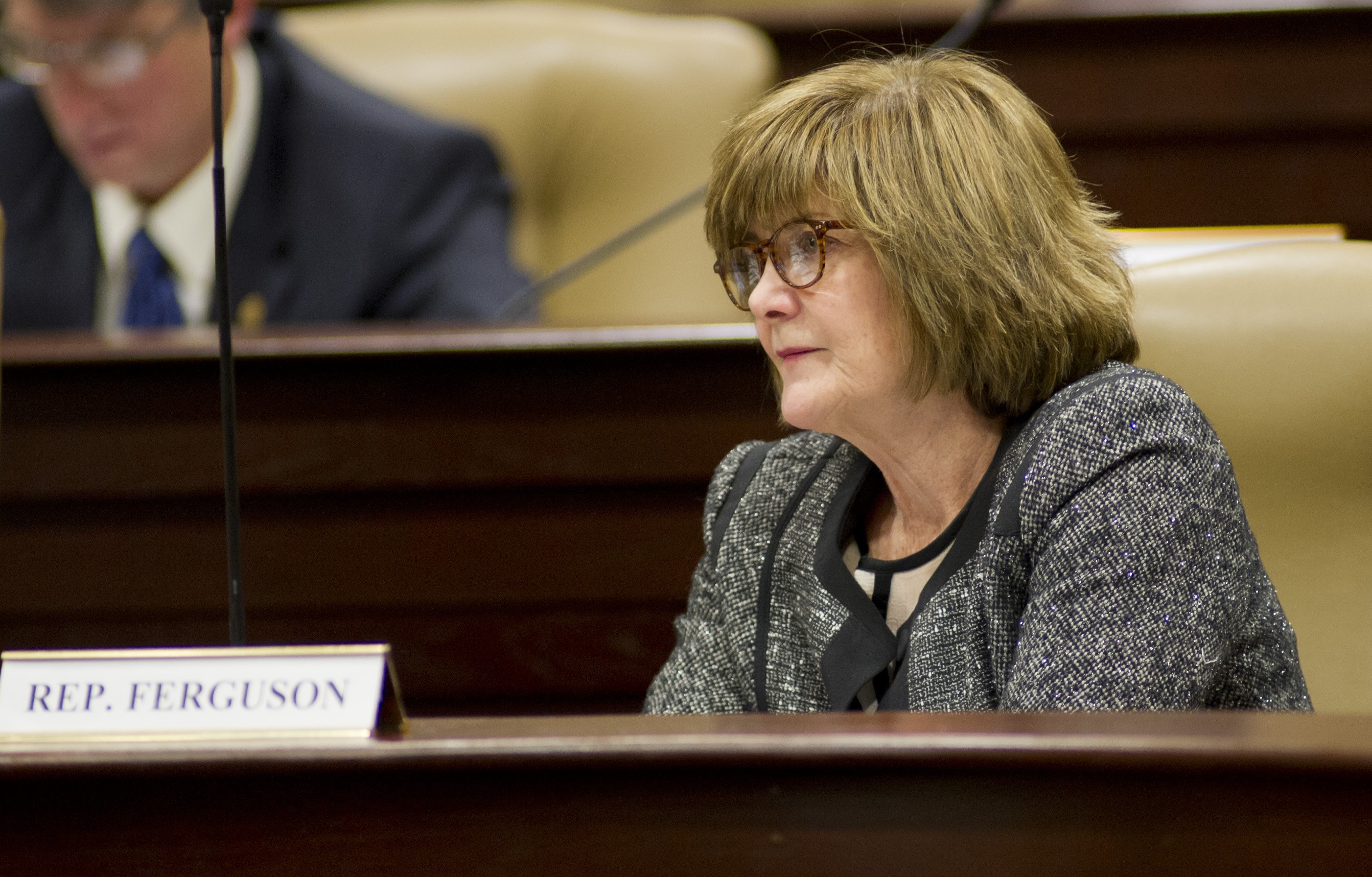 Twelve witnesses signed up to speak in favor the bill on Wednesday morning and three signed up to speak against it. However, the committee approved a motion — made by Rep. Aaron Pilkington (R-Clarksville) — to limit public testimony on the bill to only 15 minutes on each side of the debate, preventing several people from speaking.

Jim Metzger, an economist at UA-Little Rock, spoke for the bill. Metzger, who said he owns rental properties in Arkansas and Florida, claimed HB 1410 would be good for landlords as well as renters. “Well-kept property clearly improves the livability of neighborhoods and makes them attractive to renters … so I think it improves the overall rental market,” he said.

There’s no consensus among economists that establishing basic standards for rental properties will drive prices higher, Metzger said. Rents in Arkansas are low for many reasons, he said, from low property taxes to low median incomes. “I don’t think the clauses in here are so onerous that they’re going to [raise rents]. … The market is just too competitive for that,” he said.

But Cliff McKinney, an attorney representing the Arkansas Realtors Association, told the committee the bill would harm both tenants and landlords. The association would support a bill that “reaches an appropriate balance” between both parties, he said.

“If you don’t have an appropriate balance, costs for landlords will go up. If costs for landlords go up, then costs for tenants go up. Rents will increase. The availability and supply of affordable housing will go down in the state,” McKinney said. He listed several specific complaints about the bill as written, such as the inclusion of the word “safe” as a standard in several places. That could “impose liability on landlords for criminal activities” on the premises, he said.

McKinney’s opposition prompted a question from Rep. Laurie Rushing (R-Hot Springs), who in 2017 sponsored a more modest attempt to establish habitability standards. She is also a realtor herself. Rushing said her 2017 bill was “written and introduced by the realtors,” only to be shot down by them later.

“I carried it through the House and made it through this committee and then we got to the Senate side and then we made one minor change … and then all of a sudden the realtors were against that bill — their own bill. So my question to you is: is there ever going to be a bill that’s even halfway close that realtors can agree on? Because if they can’t agree on a bill they wrote themselves, then I’m not sure they can agree on anything.”

McKinney told Rushing that “the realtors would support something that allowed a fair and balanced approach.” McKinney declined to answer when asked by another legislator whether he felt there was a need for any new landlord-tenant law.

Among the others who spoke for the bill was Cory Cox, the chief of staff for Attorney General Leslie Rutledge. The AG’s office, he said, was “very interested in seeing something done” due to the daily consumer complaints the office receives from tenants. He urged the committee to “come to some resolution” with Gazaway.

“If you have concerns, he’s willing to work with you … we need something done in this area,” Cox said. “Let’s not just write this off and say there’s nothing we can do.”