The House State Agencies Committee this morning declined to approve a motion by Rep. Jack Ladyman (R-Jonesboro) to table Rep. Charles Blake’s HB 1736 to redesignate the symbols of the stars on the Arkansas flag to eliminate the Confederacy as underpinning one star.

Committee Chair Dwight Tosh commented on the motion that he liked for representatives to be able to introduce their bills. Blake’s effort has been set back once already. There was a roll call on the motion, which Tosh announced was defeated, but he didn’t immediately announce the vote. Watching the streaming event, it sounded like many representatives didn’t take part in the vote, but there were some audible nos from Democratic members.

I’m seeking a roll call. This ought to be a standup kind of issue. Yea or nay? For a continuing veneration of a symbol of slavery or against?

UPDATE: The roll call was 4-4, with 12 members, some of them visible in the room, not voting. 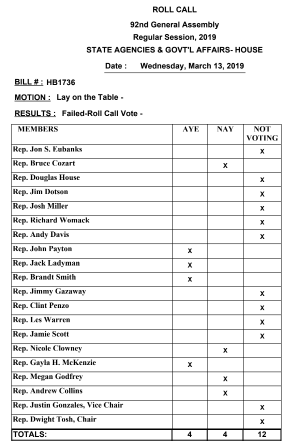 UPDATE: Blake tells me he’ll present the bill to the committee next Wednesday.