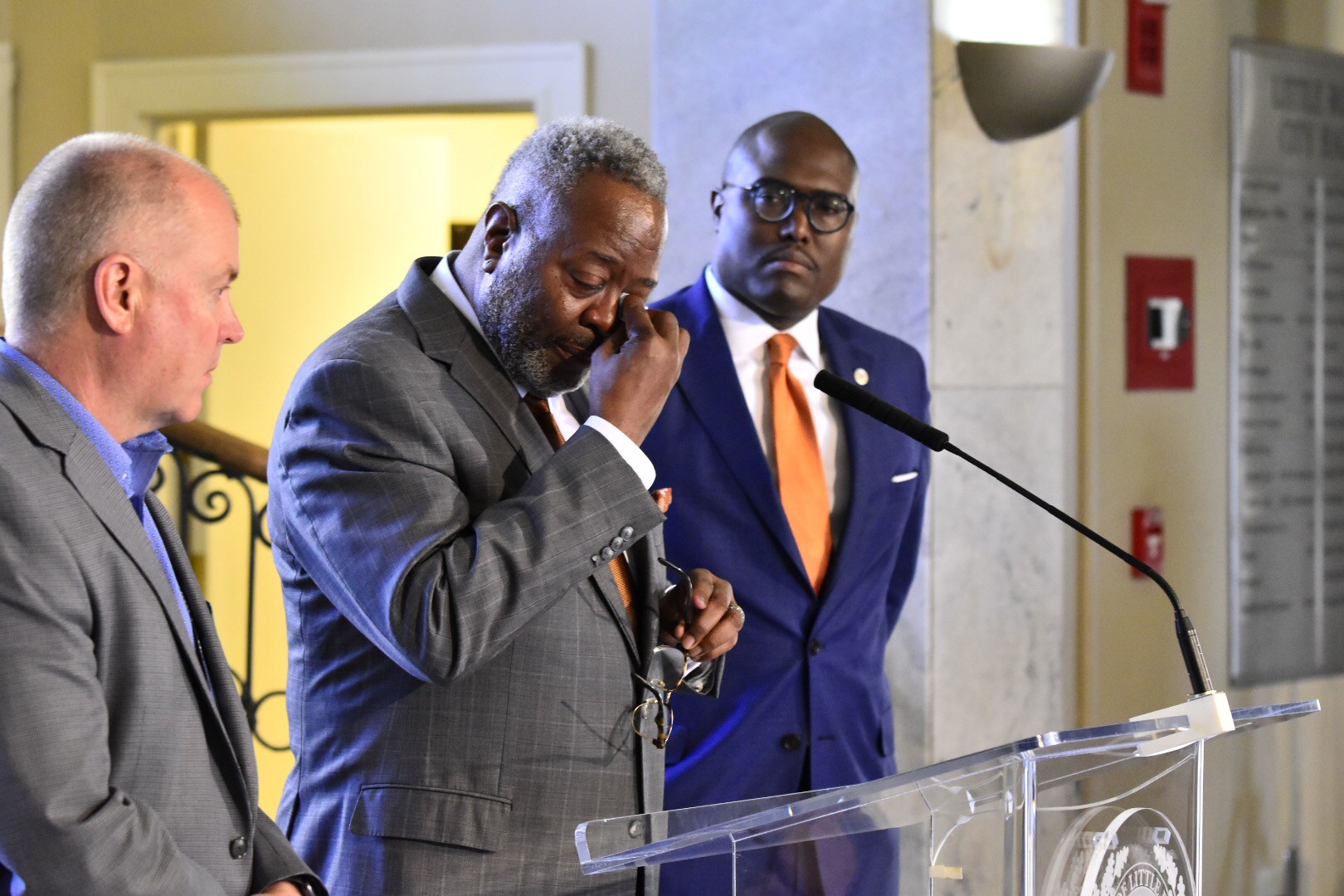 We had guessed before the announcement that Humphrey would be the pick. After we posted our prediction, KARK/Fox 16’s Tyler Thomason, quoting sources, indicated it would be Humphrey. My own guess was based on a variety of factors and answers to questions during the vetting process. I thought the situation (in need of “serious repair” as Humphrey himself put it) favored an outsider and Humphrey’s answers on pressing issues, including outside review of police use of force and overuse of free use of cars for officers to drive home to residences in other cities, seemed likely to win favor with Scott.

He was one of four finalists, along with Little Rock deputy chiefs Alice Fulk and Hayward Finks and retired Los Angeles PD commander Todd Chamberlain.
Rebekah Hall will be back soon with more from Scott’s announcement. But Twitter reports indicate Scott had talked with City Board members about his choice. Humphrey was on hand for the announcement. He grew emotional and called the job a dream come true. He goes to work next month.

The mayor said he selected Humphrey after “conducting interviews, watching interactions and engagement at the community forums, listening to feedback of the Fraternal Order of Police and the Black Police Officers Association, [from] many community members and leaders, as well as all members of the LRPD,” and that while all four finalists were qualified, Humphrey stood out as the best candidate to “build and strengthen bridges between the community and the police.”

Scott also said Humphrey’s “focus on crime reduction through community policing” and his “understanding of cultural competency” set him apart from the other candidates.

“If we truly desire to unite Little Rock and focus on moving our city forward, we have to have this new direction, this new watershed moment, that we’re starting with a focus of foundation and trust with relationships between the community and our police,” Scott said.

Humphrey became emotional as soon as he stepped up to the podium, saying that being selected for the position has been “a dream come true.” At his community forum earlier this month, Humphrey said he’d been interested in the Little Rock police chief position when it was open in 2014, but due to a five-year commitment to the city of Norman, he couldn’t apply for the job.

“The times that this job has been open, I was not ready for it, or I had given a commitment to another department, and so I think it’s the will of God that this is open, and I thank God for giving me the opportunity,” he said.

He added that he doesn’t think “this city or this police department is broken,” but “there needs to be some serious repair here,” asking to be held accountable in the new position.

Humphrey said his goal is to be in Little Rock within the next 21 days to “hit the ground running” for improvements in his first 100 days in office.

He teared up as he thanked his wife and his family, saying that if it wasn’t for them, “I wouldn’t be here. It’s been a long road. A lot of long days, long nights. A lot of commitment to being a student of the profession, and I just want to assure you that we will work hard.”

He apologized for getting emotional, but then said, “That’s just who I am. I can’t change that. I promised my wife I wasn’t gonna do this, but that’s who I am. I’m a crybaby, especially when it’s something really meaningful to me.”

In his first 100 days in office, Humphrey said he plans to get to know the community, the department, and “show that I’m committed to the job.” Asked how he’ll handle coming into the department at such a tumultuous time, he said he thinks “it’s important to listen,” and he will listen to learn what the department’s problems are, “both internally and externally.”

Scott then stepped back to the podium to thank the city board of directors, saying he sought feedback from every director.

“I want to thank them for their counsel and their advice,” Scott said. “Whether they agree with my decision or not, they did give that feedback to demonstrate unity within ourselves, and I do respect each one of them, and I appreciate each one of them.”

Asked by a reporter whether Humphrey considers himself a “five-year chief,” as former Chief Kenton Buckner previously described himself, Humphrey said he’s a “long-term chief.”

“[The mayor] doesn’t have to worry about my name coming across as for department,” Humphrey said. “I’m here, as long as he’ll have me. … This is it. My wife’s in the audience right now, and I can tell you, this is it.”

Humphrey acknowledged that while Buckner did say in his exit interview that there is racial tension within the LRPD, he’ll be “verifying whether this is true” during his first 100 days in office.

Humphrey ended the press conference by sharing his commitment to restoring and maintaining trust between Little Rock citizens and the police department.

“Citizens need to know that we are their police department,” he said. “My main focus is to make sure that citizens believe us, that if there’s any loss of trust and faith, we need to improve that. … That’s why I want to get here as soon as I can, so we can actually see what we need to do to make this not only the best department in the but in the nation.”

There was no mention during the news conference of the most pressing issue before the department currently — the investigation of Officer Charles Starks’ fatal shooting of Bradley Blackshire during a recent traffic stop. Starks has been suspended from duty. The prosecuting attorney is weighing whether the shooting was justified.