Governor Hutchinson on Monday voiced enthusiastic support for legislation to create a school voucher pilot program in Pulaski County, calling it “the right model” for Arkansas.

Senate Bill 620, sponsored by Sen. Blake Johnson (R-Corning) and Rep. Ken Bragg (R-Sheridan), would pay for an estimated 500 students from low-income Pulaski County families to attend private schools instead of public ones. The vouchers — called “Capital Promise Scholarships” — would run between $5,000 and $7,000 per student and would be funded with up to $3.5 million annually from the governor’s rainy day fund.

SB 620 states its intent is “to evaluate the effectiveness of this type of scholarship program, and … to consider whether it should be expanded beyond Pulaski County.”

The governor also indicated he played a key role in shaping the bill. Though he supported an unsuccessful push to create a voucher-like program in the 2017 legislative session, Hutchinson acknowledged on Monday that the 2017 bill was “difficult to explain” and “a little bit cumbersome.” This session, when Republican lawmakers began discussing a new attempt at a voucher bill, the governor decided to get involved.

“I wanted to be able to get out there and push aggressively a school choice funding bill, but I wanted to see the right model that I thought would fit, and so I asked my staff to work this up — they’ve done a great job on this — [and] presented it to Sen. Johnson and Rep. Bragg and others. It was really a progression,” Hutchinson said.

Democratic legislators criticized the bill at a press conference Monday morning and warned against sending taxpayer money to private schools. Sen. Joyce Elliott (D-Little Rock), a former public school teacher, said SB 620 would be “a social experiment that does not need to happen.” Voucher programs in states such as Florida and Wisconsin have been unsuccessful, she argued.

“We do not need to have our kids subjected to something that we already know does not work,” Elliott said. “This notion of vouchers has been around for at least 27 years … . The metadata is very clear. This is no longer an experiment because we know it has not been collectively good for students or families.”

Instead of vouchers, the $3.5 million could be invested in pre-K, college scholarships or other educational programs with more well-established benefits, she suggested. 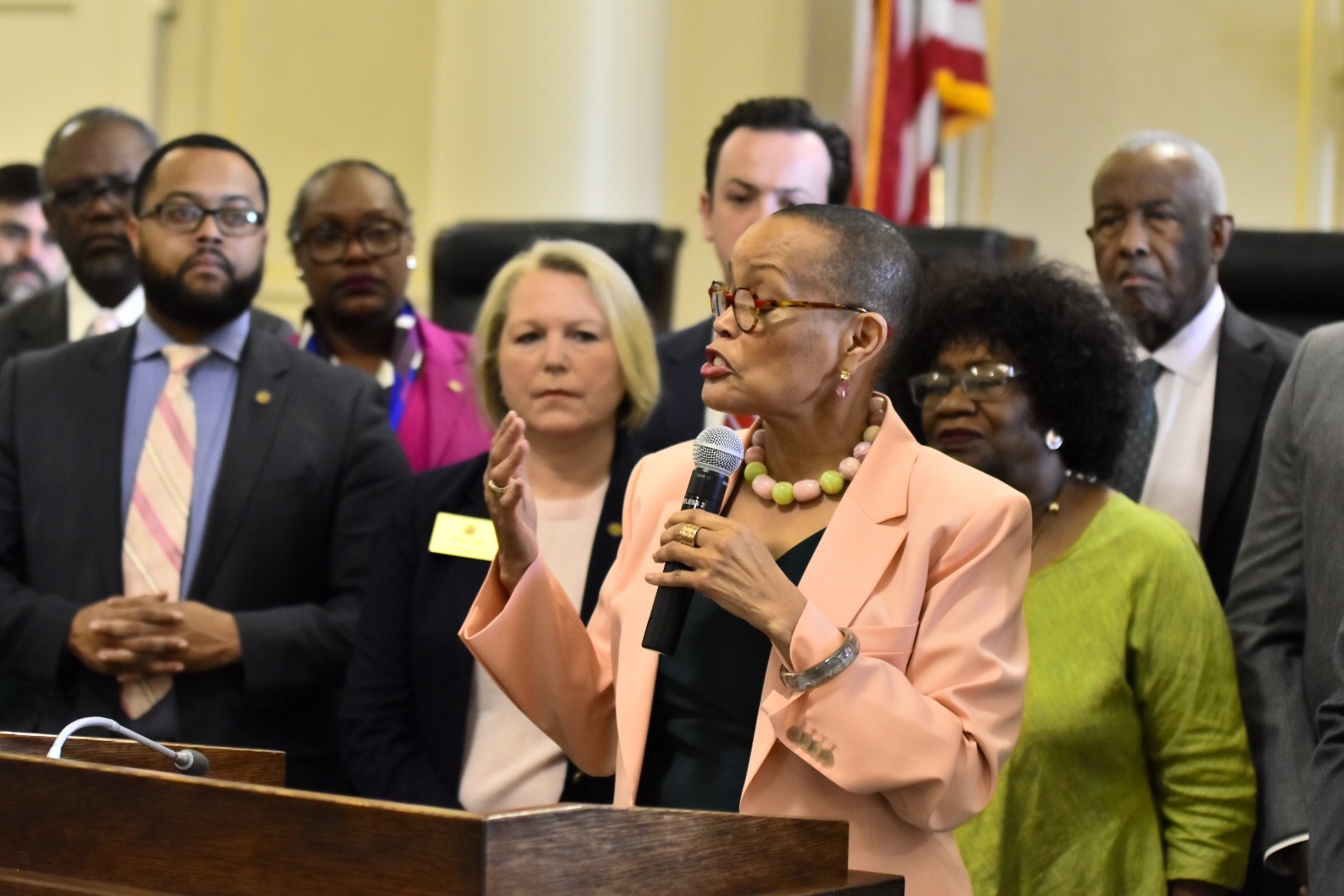 Elliott, who is African American, also said the pilot program’s singular focus on low-income families in Pulaski County evoked a long history of “experiments that were done on black bodies” throughout U.S. history. She referenced the infamous Tuskegee experiment, an unethical study in Alabama in which federal medical researchers withheld medical treatment from hundreds of black syphilis patients in the name of scientific research.

In 2018, Pulaski County was 58 percent white, 37 percent black and 6 percent Latino, according to a U.S. Census Bureau estimate, but a disproportionate number of low-income households are black or Latino.

“I am not suggesting that the governor does not have good motives,” Elliott said. “I’m suggesting that when you don’t understand … because you have not been a part of something that has affected you or your culture or your group like this, you ought to listen to people.”

She said Hutchinson held a meeting with legislators from Pulaski County last Tuesday to let them know the legislation was coming but “did not listen to anything we had to say.” The bill was publicly announced last Wednesday.

“It’s hard for me to see anyone looking at this program and saying that this does not give good options for students and parents … . It doesn’t compel anybody to leave the public schools. It doesn’t even incentivize them to leave the public schools. It just gives them a choice, if they are in a school that doesn’t fit for their child. And then you can measure those statistics,” Hutchinson said.

The governor said he had listened to the objections of the Legislative Black Caucus, but claimed he had also heard from parents in Pulaski County asking for more school options. “I haven’t heard parents come to me and say, ‘We don’t want this choice for our children,’ ” Hutchinson said.

Advocates of SB 620 say Pulaski County was chosen as a test site for several reasons: It has well-established private schools, a large population and a significant percentage of low-income households.

Opponents of vouchers worry that steering students into private schools will further fragment the K-12 education and weaken public schools. “When we do piecemeal things like this, we undermine the whole system,” Elliott said. But Hutchinson insisted the state was “working hard” to “improve the performance” of public schools at the same time it was providing “additional options for school kids.”

A student would be eligible for the program if his or her family qualifies for free or reduced-price school lunches, meaning a household income of up to 185 percent of the federal poverty line. The vouchers would be administered by a 501(c)(3) nonprofit known as an “eligible student support organization,” which would be certified by the state Education Department. The money could be used for tuition, fees, uniforms or textbooks at a participating “nonpublic school.” Once those expenses were met, any remaining funds could be used for tutoring, transportation, testing and certain other expenses.

To participate, a private school would have to be accredited, fiscally sound and comply with state laws and local health and safety requirements. It would also have to annually administer a standardized test to participating students.

The exact amount of money allocated per student would be tied to the state’s public school funding formula, which typically rises every year. Students in grades 9-12 would receive the equivalent of state foundation funding every year, which is $6,883 for the 2019-20 school year. Students in grades K-8 would receive 80 percent of that amount, or $5,506.

A participating student would also be eligible for a $5,000 annual college scholarship if he or she graduated with a GPA of at least 2.5 and chose to attend a college or university in Pulaski County.

A school district typically loses funding when a student transfers away from that district, but SB 620 contains a “hold harmless” provision that says a district under the control of the state won’t lose any funds “as a result of any loss of public school students to the Capital Promise Scholarship Pilot Program.” The language is a nod to the Little Rock district, which has been under state takeover since 2015.

But critics say experimental voucher programs like the one proposed by SB 620 only undermine public schools and further increase educational inequity.

“We chase after every bright, shiny object we see. No high-performance school district in the world conducts education the way the governor is proposing,” Elliott said. “We’ve become the petri dish for everything that is not working.”