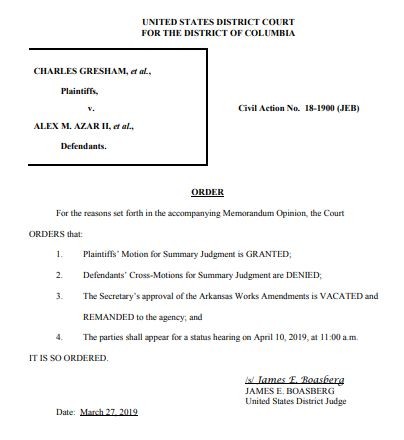 As most expected, a federal judge in Washington has struck down Arkansas’s work rule to qualify for expanded Medicaid coverage. what for the governor and Arkansas legislature?

The judge also blocked a similar requirement, on a second try, by Kentucky.

Gov. Asa Hutchinson must now decide what to do next, including navigating a legislature that might be less inclined to approve the Human Services Medicaid budget without the work rule.

He’ll talk about it at a news conference tomorrow morning, but said this in a prepared statement:

“I am disappointed in the decision handed down late this afternoon. I have not yet had the opportunity to review the opinion in its entirety, but I plan to do so this evening and provide further comment tomorrow morning on the future of the Arkansas Works work requirement.”

The state and federal government can also file an immediate appeal to the Court of Appeals and seek to stay Boasberg’s order on appeal. It seems likely in such an argument the court would have to weigh the relative harm for the state and Medicaid recipients in keeping his order in place.

Judge James Boasberg had indicated skepticism about the rule in oral arguments. The Medicaid program is meant to provide health coverage to lower-income people. It is not an employment program.

The suit by advocates for Medicaid recipients included testimony from those harmed by the rule and included testimony about the difficulty of complying with the rule. The judge vacated the rule, defended by the Trump administration, and sent it back to Health and Human Services. He set a status hearing April 10.

Here’s the judge’s opinion in the second Kentucky case.

Boasberg reiterated that he’d ruled in the first Kentucky case that the state hadn’t adequately considered whether the program would help the state furnish medical assistance to its citizens, a central objective of Medicaid. So in considering the new waiver allowing a work rule, he wrote:

Despite the protestations in its (and intervenor Arkansas’s) briefing, HHS conceded at oral argument that the administrative decision in this case shares the same problem as the one in Stewart I. The Court’s job is thus easy in one respect: the Secretary’s approval cannot stand.

The state had argued against vacating the waiver because it said it was in place and change would be disruptive. The judge disagreed.

Given the seriousness of the deficiencies — which, as this Court explains in a separate Opinion issued today, the remand in Kentucky did not cure — and the absence of lasting harms to the Government relative to the significant ones suffered by Arkansans like Plaintiffs [which he detailed in opening the opinion], the Court will vacate the Secretary’s approval and remand for further proceedings.

The judge declined to rule on the computer reporting rule in Arkansas that later was amended to allow phone reporting. He said he didn’t need to reach because becausre he ruled on the issue “writ large.”

Plaintiffs’ position is simple: “The purpose of [] Medicaid” is to enable states “to furnish health care coverage to people who cannot otherwise afford it.” Yet the Secretary, just as in Stewart I, “failed to consider adequately” the impact of the proposed project on Medicaid coverage.  Indeed, he neither offered his own estimates of coverage loss nor grappled with comments in the administrative record projecting that the Amendments would lead a substantial number of Arkansas residents to be disenrolled from Medicaid. Those omissions, they urge, make his decision arbitrary and capricious.

Plaintiffs are correct. As Opening Day arrives, the Court finds its guiding principle in Yogi Berra’s aphorism, “It’s déjà vu all over again.” In other words, as the Secretary’s failures here are nearly identical to those in Stewart I [the first Kentucky case], the Court’s analysis proceeds in the same fashion.

The ruling has wide-ranging impact. The defendant is Donald Trump’s health secretary and waivers such as these are in motion in many states.

Rich Huddleston, director of Arkansas Advocates for Children and Families, cheered the ruling:

Today, U.S. District Judge James E. Boasberg ruled that Arkansas’s work reporting requirement cannot continue because it violates the purpose of the Arkansas Works program. The decision puts a stop to a deeply flawed, misguided policy. For now, Arkansans can no longer lose coverage because of the requirement, which is a big victory for health care in Arkansas.

Nine Arkansas Works beneficiaries, who lost their coverage due to the work reporting requirement, sued the U.S. Department of Health and Human Services, which oversees Medicaid. Legal Aid of Arkansas, the National Health Law Program and the Southern Poverty Law Center represented the plaintiffs.

The judge’s ruling in the plaintiffs’ favor reaffirms Medicaid’s fundamental purpose as a health insurance program. As he stated in the ruling, the Department of Health and Human Services’ approval of the requirement was “arbitrary and capricious” because it did not address how the project would further the core objective of Medicaid: the provision of medical coverage to the needy.

We couldn’t agree more, and we applaud today’s ruling and are grateful that Arkansas Works will continue to cover hard-working, low-income Arkansans who don’t earn enough to pay for health insurance or aren’t offered health insurance through their jobs. Today’s decision only stops the work reporting requirement, which was a burdensome process that put up administrative barriers but did nothing to support or incentivize work. The rest of Arkansas Works will continue, giving people the health coverage they need, without unnecessary red tape.

We believe in the value of work. If we truly want to encourage work, we need to stop efforts to take away health insurance from people who need it and look at policies that improve our economy, provide more jobs at a livable wage, and help train people for those jobs. And it’s important to note that the majority of Medicaid recipients are already working. This policy was designed to make it harder for low-income Arkansans to keep coverage, and unfortunately it was very successful while it was in place.