A House committee failed to endorse SB 411 to prohibit local governments from having “sanctuary” policies toward undocumented immigrants.

The bill was ruled passed on a voice but failed on a roll call, with six members missing from the room. It appeared to get about nine votes, with 11 needed. Correction: I’m told 10 votes needed in this committee under the rules because the House speaker is a member.

Sen. Gary Stubblefield and Rep. Brandt Smith argued that the bill would ensure law enforcement followed federal law. They offered no illustration of where any such policies are in effect in Arkansas. But Stubblefield said some cities had moved from providing IDs to immigrants, as Little Rock does, to seeking to allow them to vote. No such proposal has been made in Arkansas.

Rep. Carol Dalby, a lawyer, said she had a question about the bill’s authorizing a fact-finding investigation by the attorney general’s office if someone complained a government was out of compliance and could decide that a city or county couldn’t receive state money as a consequence. Dalby said it’s a violation of the constitution for the attorney general to become a fact-finder. “Maybe there’s a better mechanism for a complaint to be heard.”

Stubblefield said he’d be glad to change the bill to make it better and said he’d said the same to Gov. Asa Hutchinson about a question of whether “probable cause” existed for stopping a person.

But Smith said, in response to a question from Rep. David Whitaker about specific policies, that things were happening, including in Little Rock, “basically off the record, to not go after some of these illegals in our state.”  He cited City Director Lance Hines’ comments about Little Rock policies. Stubblefield then cited the 1,100 IDs passed out at a cost of $180,000 in Little Rock. “That’s not a rumor.” Before long, other cities will adopt the same policies as Little Rock, Stubblefield said.

Pressed, however, Stubblefield conceded there were no ordinances in effect, which the bill would prevent. But he said he viewed it as preventive, like vaccinating cattle against brucellosis.

Rep. Fredrick Love objected to Stubblefield using crimes by immigrants as a reason for the bill. He said citizens commit crimes, too. It’s unfair to immigrants to paint them all in that fashion.

Rep.  Spencer Hawks said he doesn’t support sanctuary cities, but said the bill attempted to address complicated issues in a simple way. He said the bill could serve to allow law officers to ask people about their citizenship status. 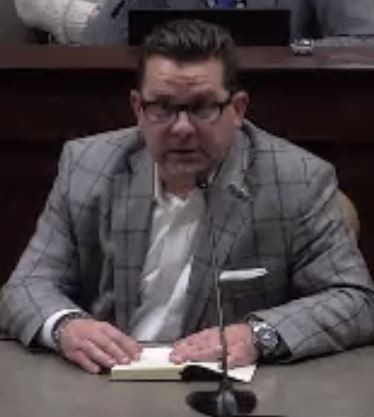 City Director Lance Hines, who opposed Little Rock’s ID program, talked of his unsuccessful effort to get a resolution passed by the City Board expressing a willingness to enforce federal law. He said he couldn’t pass it. He made clear he had a “problem” with the city’s ID program, tailored to help the homeless and immigrants. He said he’d hoped a resolution could avoid a state solution, but the city board wasn’t willing to have a discussion.

“My resolution didn’t do anything but state what our policy was as a city,” he said. But he said pro-immigrant groups had created “panic” among immigrants.

Rep. Karilyn Brown said, “You have to be sleeping under a log to not know that sanctuary cities have more crime than other cities.”

Mireya Reith, an advocate for immigrants, spoke against the bill.