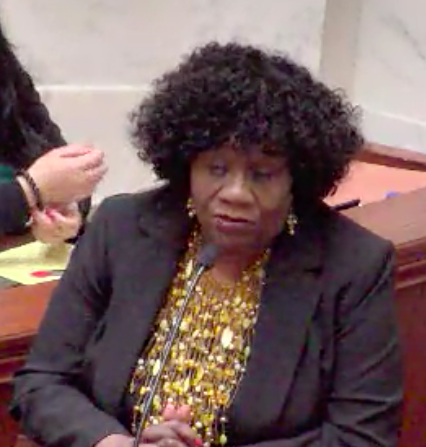 The penultimate day of legislating included a moment of virtually no legal significance, but it was nonetheless richly symbolic. It was the perpetually angry Sen. Trent Garner’s rant of a resolution, SR 30, condemning affairs in Venezuela and Sen. Linda Chesterfield’s observation in response.

You can watch Garner’s rant here (the point being, you know, socialism.) Let Arkansas not be “seduced” by the ideas that led Venezuela to ruin, thundered Garner.

She worries about the people of Venezuela and the people of the world, she said. But, why Venezuela, she asked. Where’s the resolution for the thousands who died in Puerto Rico — American citizens all?   There’s a dictator in North Korea who can reach the U.S. with nuclear weapons. There was an American resident chopped into bits in Saudia Arabia “and yet we say nothing about it. And here we are in the middle of someone else’s business.” She continued:

It’s about time we started doing something about the citizens of America and creating some resolutions about how this state will meet its own obligations rather than entering into some other country’s nation building.

The resolution was approved on a voice vote.

PS: Remember earlier in the session, a vote on another feel-good resolution. This was SR 8 by Sen. Joyce Elliott in praise of the Arkansas Poor People’s Campaign. It failed 9-14. Trent Garner was, of course, a NO!

Guns over victims of domestic violence

Venezuela over. the poor people of Arkansas.