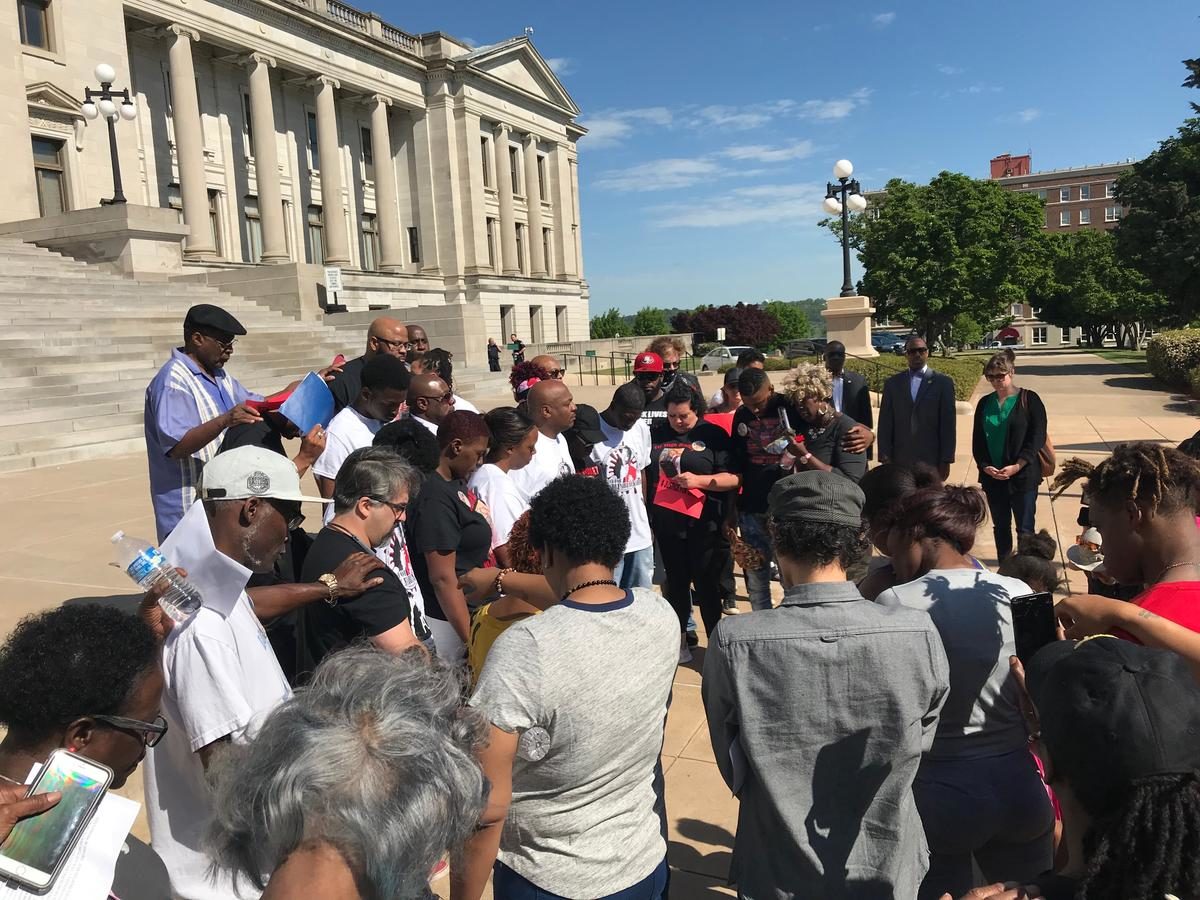 The ACLU of Arkansas has blasted the state response to a protest event at the Capitol by family and friends of Bradley Blackshire, killed by a Little Rock police officer after a traffic stop.

The ACLU confirms an earlier report I’d received that Secretary of State John Thurston refused a permit for the event, but it went ahead anyway. The Capitol was put on virtual lockdown during the event, with only legislators and elect others allowed through the policed-manned metal detector at the ground floor entrance. There was a heavy contingent of State Police, including officers on the rooftop scaning the crowd with binoculars but also armed with sniper rifles.

In a letter to Arkansas Secretary of State John Thurston, the organization warned against unconstitutional efforts to restrict First Amendment rights or intimidate peaceful protesters with a militarized police response.

Organizers protesting the shooting death of Bradley Blackshire at the hands of police were denied an application to use state facilities and equipment while they demonstrated at the State Capitol, and instead were met by a heavily militarized police presence. Arkansas Capitol Police also took the highly unusual step of locking the state capitol, denying protesters the ability to speak with their elected officials or use the building’s facilities, which are meant for public use. In addition, a member of the press was unnecessarily detained and questioned by the police during the demonstration.

“Bradley Blackshire’s death is another tragic example of the need for reforms that will bring greater accountability, transparency and safety to policing in Arkansas,” said Holly Dickson, ACLU of Arkansas legal director. “Instead of working to build trust with the communities they serve, state and local police responded to these peaceful demonstrators with an overwhelming show of force and locked them out of the State Capitol. These extreme measures raise serious constitutional concerns and reflect a fundamental disregard for the First Amendment rights of the citizens they have sworn to serve.”

The protest was peaceful, as KUAR coverage noted, and the family even encouraged peaceful protest as it criticized police action. However, there’d been social media posts about the Blackshire shooting that police agencies had viewed as threatening and that apparently contributed to the response.

No effort was made to stop the event despite the fact that it was held without a permit.

I’ve sought comment from Thurston about the ACLU criticism.

The letter linked above details the extraordinary security efforts and disputes Thurston’s excuse for denying a permit — that it wasn’t requested 30 days in advance. That’s a guideline, not a rule, the ACLU says.

UPDATE: I received this response from a spokesman for Thurston.

We are aware of the ACLU’s criticisms, however, we would not have any comment.

I asked the State Police about its duties Monday. Spokesman Bill Sadler responded:

Specifically a request was made for state troopers to assist Little Rock police officers should protestors, expected at the state capitol on Monday, become disruptive.

Arkansas Code Annotated §12-8-108 states, “The Department of Arkansas State Police shall be responsible for the safety and security of the State Capitol Building and grounds.”State Police commanders agreed to assist Little Rock police officers and place troopers inside the capitol building and in the vicinity of nearby Interstate 630.