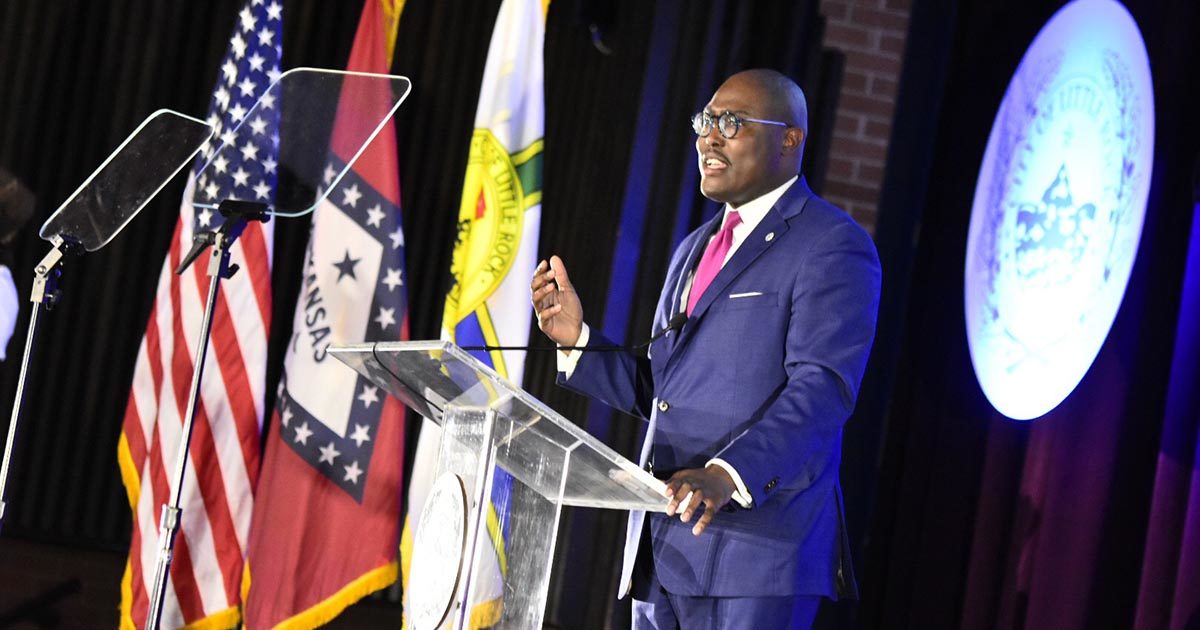 ‘PLAYBOOK’ FOR THE NEW MAYOR: Mayor Frank Scott Jr. released the “Scott Script” yesterday, a 92-page report that combines recommendations from his transition team on how to improve the city.

Mayor Frank Scott Jr. released the “Scott Script” yesterday, a 92-page compilation of the recommendations from his transition team’s eight citizen-led subcommittees for uniting and improving Little Rock. Antwan Phillips, an attorney, campaign advisor to Scott and co-chair of the transition team’s board of directors, said he hopes the report will act as a “playbook” for the rest of the mayor’s first term. “We hope the mayor and city hall and the city board take some of these recommendations and put them in place because this is what the people want,” Phillips said. “This wasn’t the mayor saying this is what needs to happen. This was 100 residents of the city of Little Rock saying, ‘This is what we want to see.’ So hopefully our representatives will represent us and give us what we want.”

The report, available online at littlerock.gov/scottscript, acknowledges that its recommendations will warrant further research on potential “budgetary, legal and staffing” implications. The “Scott Script” combines recommendations from resident-led subcommittees on Economic Development, Education, Finance, Inclusion, Mobility, Public Safety & Accountability, Quality of Life and Transformation & Government Reform. Phillips said the transition board decided that each of the subcommittees would begin the recommendation process with the mayor’s campaign agenda items and “either flesh those out some more or add to them.” “When you bring 100 different people [together], they’re gonna have 100 different ideas,” Phillips said. “[Scott’s] campaign agenda items were the starting point, but when you read the report, you can see, there are a lot of recommendations that are consistent [and] are separate from anything he ever mentioned during the campaign.” Phillips said he hopes the report will not receive pushback from the city board of directors, which was not involved in the transition team’s efforts, because the process was designed to help Scott transition into his new role. “This was a process that was part of the mayor’s campaign, a transition for the mayor to become the mayor,” Phillips said. “From Frank Scott the individual to become Frank Scott, mayor of the city of Little Rock. This was for him as the mayor of Little Rock. This is not a slight to any of the board members.” “Everyone who’s on the city board has been on the city board,” Phillips added. “There’s no transition for them.” Interim actions planned for this year include the continued implementation of the city’s Master Plan for Children, Youth and Families, the creation of the mayor’s Frankly Reading summer reading program in partnership with CALS, expansion of the Sidewalk Replacement Program and the rebranding of the Little Rock Racial and Cultural Diversity Commission as the Little Rock Human Rights Commission to incorporate concerns of the city’s LGBTQ community. Recommendations outside of the more short-term action items include a potential sales tax increase to raise approximately $17 million in additional revenue — if the city finds this necessary after it has “reviewed and reorganized its operations to be as efficient as possible,” according to the report. The Transformation & Government Reform subcommittee, of which Phillips was chair, presented three options for eliminating or changing the at-large director positions on the city board of directors, a desire Scott expressed frequently during his campaign. The subcommittee offered a recommendation to remove all the at-large positions, reduce the city board to four members or directors, and give the mayor more voting power on the board. In the existing government structure, the mayor only votes to break a tie. Another option presented is the establishment of “super wards” in addition to “a number” of wards. These super wards would be larger districts that overlay the other wards. If this option were to be “pursued” by the mayor, the report acknowledges that the division of wards and super wards would need to be decided, but in both suggestions, the mayor would exist as a separate entity with voting power within the ward/super ward structure. The third option suggests the at-large director positions would remain, but a residency requirement would be imposed on the role. The at-large directors would still be elected citywide, but each must reside in a specific area or ward. Asked if the subcommittee preferred any one recommendation to another, Phillips said the group was unable to reach a consensus and decided to present the mayor with its research and allow him to “decide which one he wants.” However, Phillips said the group did agree that “we all wanted the mayor to be able to function as a mayor and not have the type of government we have now, where it’s somewhat mayor/council but still limited because we’re under the city manager umbrella.” He added that the subcommittee also agreed on the recommendation to require city directors to win their elections by 40 percent of the vote, instead of the current election structure, where the candidate with the most votes wins.

Phillips said Scott was not involved in the creation of any of the transition team’s recommendations, saying the mayor saw rough drafts of the full report after all the subcommittees had submitted their recommendations. In its report, the Transformation & Government Reform subcommittee also wrote that while Scott is now the head of six city departments — Finance, Fire, Police, Planning & Development, Public Works and Human Resources — the “staffing and job duties [at City Hall] are currently aligned to support a form of government where the city manager had the day-to-day responsibility of… all 12 departments.” So, the subcommittee recommends for the “internal transformation of job duties and staff” in order to more effectively adhere to the 2007 ordinance that designates the mayor as CEO of the city. Scott recently convened a budget meeting for the board of directors to update the city leaders on the status of the city’s 2019 budget, and a glaring point of concern for the mayor was the fact that 75 percent of the city’s budget is allocated for personnel. Asked if the subcommittee’s recommendation of “internal transformation of job duties and staff” within City Hall would conflict with potential necessary personnel cuts, Phillips said this phrasing was intended to illustrate that the mayor “probably needs more help” than previous mayors because of his new responsibilities as head of those six departments. Phillips added he imagines this additional help would take form in giving existing staff more duties or “repurposing positions” instead of potentially hiring new staff. The transition team might schedule a town hall to receive public input on the recommendations put forth, according to Phillips. Phillips said the experience of co-chairing the transition board with Will Rockefeller was  “fulfilling.” “I was very excited and happy to be a part of the process, to let all those people experience some of the things I’ve been fortunate enough to experience, to have a seat at the table, and be somewhat involved in how our city looks going forward,” he said.
Phillips said that while sometimes Little Rock is “a little slow” to new practices in municipal government, “this stuff happens everywhere else. In Memphis, in Birmingham, they have transition reports, they have transition teams, they have stronger mayors. You can pick a city that’s our size or bigger, and these things are commonplace things there.”