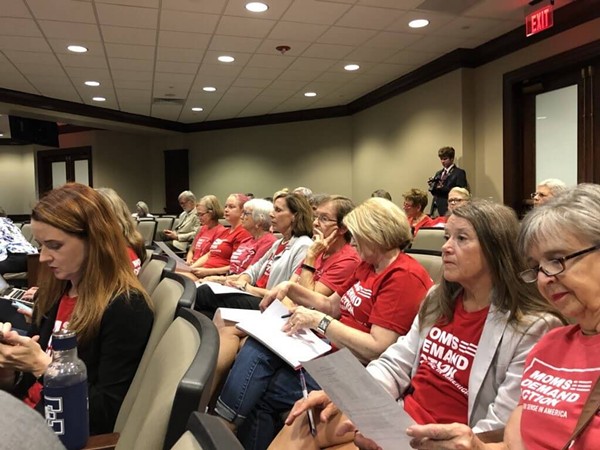 SEEN AND HEARD: Moms Demand members were a frequent sight at legislature.

The Arkansas chapter of Moms Demand Action for Gun Sense in America is touting a successful legislative session. No new gun safety legislation was adopted, but they played successful defense on some bad proposals.

Those defeated, as cited by the group:

* HB 1059/SB 484, which would have threatened public safety by altering self-defense laws to add “Stand Your Ground” provisions. Stand Your Ground laws embolden people to shoot to kill even when there is a safe way to avoid the situation. The bill garnered national attention after Sen. Stephanie Flowers delivered a powerful speech highlighting the disproportionate and deadly effects of Stand Your Ground on communities of color.

* SB 660, which would have allowed students with enhanced carry permits to store handguns in their dorm rooms or student housing.

Said Eve Jorgensen, leader of the Arkansas chapter in a news release:

“These victories prove how powerful we all can be when we stand together and make our voices heard to our elected officials. From standing with our gun sense champions in the legislature to testifying at hearing after hearing and mobilizing our communities to take action, our chapter has never stopped fighting for common-sense gun laws and gun violence prevention. Today, we are proud to celebrate the safer Arkansas we have created together.”

Sadly, the gun safety forces were defeated by the gun lobby in an attempt to pass legislation to keep guns out of the hands of convicted domestic abusers.

Another benefit of the determined Moms: helping keep Sen. Trent Garner (R-OK Corral) in a near perpetual state of rage.