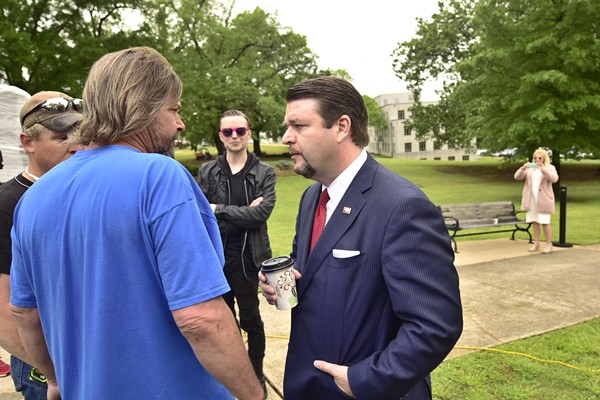 The Satanic Temple, among those challenging religious statuary on the state Capitol grounds, can now claim discrimination as a church denied a place for its Baphomet statue equivalent to that given the Christian Ten Commandments.

The Satanic Temple (TST), the world’s most eminent modern Satanic religious organization, is celebrating their recent approval to claim a world first – recognition as a legally protected Satanic church, receiving 501(c)(3) tax exempt status from the IRS. This status, elevated beyond previous designation as a religious non-profit, is a culmination of years establishing itself as a constitutionally protected class, completely encompassing all attributes designated to churches that are uniquely distinct from other charities and/or religious groups.

The decision to pursue exempt status comes as a re-evaluation of prior principled refusal to accept religious tax-exemption after the passing of legislation to prevent the IRS from revoking tax-exempt status from churches as part of an IRS Funding bill. “In light of theocratic assaults upon the Separation of Church and State in the legislative effort to establish a codified place of privilege for one religious viewpoint”, says TST’s co-founder Lucien Greaves, “we feel that accepting religious tax exemption — rather than renouncing in protest — can help us to better assert our claims to equal access and exemption while laying to rest any suspicion that we don’t meet the qualifications of a true religious organization.”

To qualify as the first of its kind Church, as opposed to a religious non-profit, The Satanic Temple distinguishes itself from other non-theistic religious groups with its unique set of Tenets, as well as regular congregations and religious services, with an established headquarters located in Salem, MA.

The Satanic Temple’s continued efforts to participate in the public sphere, where other religious groups have been given favor, has faced various challenges and discrimination from government officials and agencies alike that continuously question or outright mock the religious identity and beliefs of its congregation. “As ‘the religious’ are increasingly gaining ground as a privileged class, we must ensure that this privilege is available to all, and that superstition doesn’t gain exclusive rights over non-theistic religions”, says Greaves. Thus, the designation of Church given to TST and it’s members affirms their rights as religious individuals and cannot be subject to question in legal proceedings.

As Lucien Greaves puts it, “Satan is here to stay.”