REBSAMEN GOLF COURSE: Turn some of it into private develoopment?

The Little Rock City Board heard results Tuesday of a consultant’s review of city golf course operations and the Arkansas Democrat-Gazette’s report mentioned in passing some potential hazards worse than the average sand trap.

Bottom line: The city courses are hemorrhaging money because of declining use, with expenditures of $2.6 million almost doubling revenue of $1.4 million.

City services need not be profit-making, but still, this is excessive. Problems range from flooding at Hindman Park to the growing expenses for the city in covering the cost of First Tee, envisioned in the beginning as a self-sustaining nonprofit for youth built initially on a gift from Jackson T. Stephens. It has increasingly become a city drain and a report by a couple of consultants seems to envision that city commitment will only keep growing. That’s one potential spot of rough — the idea of a billionaire’s idea turned into a permanent city taxpayer liability.

But that’s nothing compared to ideas floated for War Memorial and Rebsamen Parks. The consultants, Dan Snider and Phil Herrington, talk about converting acreage in Rebsamen Park over to private development or used for “event hosting.” For background here, read Ernest Dumas’ report on the “Save the Park” campaign that prevented turning Rebsamen Park Road into a thruway, with more traffic. It enabled the eventual completion of a chain of bucolic parks, immensely popular with bikers, hikers and nature lovers extending on both banks of the Arkansas River from downtown to the Little Maumelle River.

And woe betide the idea of putting a private “nontraditional” golf operation in War Memorial Park. Is this the Top Golf franchise the mayor wants so badly to deliver? It would not be universally cheered. 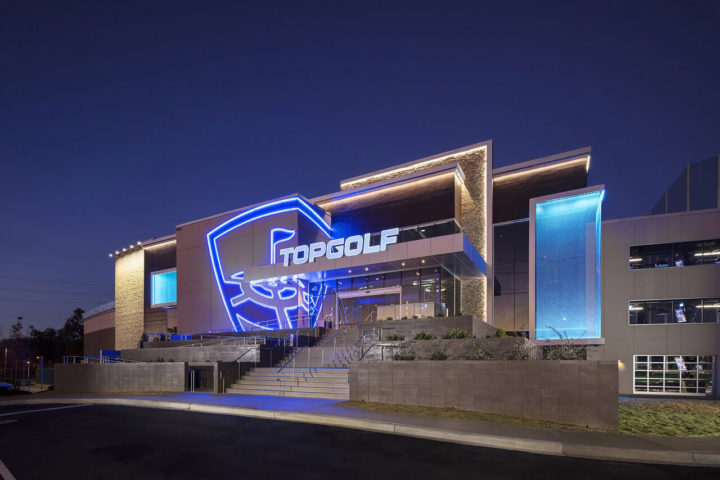 TOP GOLF: Is a sports bar and entertainment venue open until 2 a.m. a good fit for War Memorial Park?

Private interests have been trying to carve up War Memorial for private development ideas since before I came to town in 1973. The short course there isn’t heavily used, but it has devoted adherents, a diverse crowd that looks a good bit different than what you encounter at, say, the Country Club of Little Rock. I’ve long been open to the idea of reducing that layout, but only to create still more general use parkland.

Top Golf does NOT fit this bill. They are a huge golf, party venue, sports bar/restaurant  operation generally found in major cities and many staying open for revelry until 2 a.m. An addition to Hillcrest? I’m guessing some might object. Even more if it were to be plunked down in the chain of parks that Rebsamen Golf Course anchors. Some of this land, if I recall correctly, was acquired for the expectation it would be used for park land only.

I think making a park of greater broad appeal in Hindman, in place of often flooded golf holes, sounds like a good idea. But then it’s easy for me to say because it’s in a neighborhood far removed from me. Just as it’s easy for others to cheer a bar in War Memorial or some private developments in Rebsamen Park.

The golf debate holds promise for political interest, if nothing else.

I’ve asked a couple of the city’s various public information officers for a copy of the golf report. UPDATE: You can hit the link to see it.