In a press conference Monday morning, attorney Mike Laux and the family of James Hartsfield announced their filing of a federal civil rights lawsuit against Little Rock Police Department Officer Brittany Gunn, who shot and killed Hartsfield during a traffic stop in October 2017 while she was working private security at the Local Union Tap after-hours club. The city of Little Rock and Local Union Tap are also named in the complaint.

The lawsuit was filed in U.S. District Court for the Eastern District of Arkansas and has been assigned to Judge Susan Wright. It alleges Gunn violated Hartsfield’s constitutional rights during the incident and that Gunn knew Hartsfield prior to the shooting and attempted to conceal this during the police department’s internal investigation of the incident.

Laux said he had been told from multiple sources that Gunn and Hartsfield had mutual friends, as they both attended UA Little Rock and worked at the Donaghey Student Center at the same time. He also said that while it is a pleading in the case that will need to be substantiated, he had “pretty good knowledge from a former student at UALR” that Gunn had “romantic feelings from afar” for Hartsfield.

According to police accounts at the time of the incident, Gunn said she suspected Hartsfield had been drinking when he arrived at Local Union to pick up a fare, as he was working part-time for the ride service Lyft, saying that she saw an open beer bottle in Hartsfield’s car. After telling Hartsfield to exit the vehicle, Gunn and another officer attempted to pull Hartsfield out of the vehicle through the passenger door. The car began moving with Gunn and Hartsfield inside the car, and Gunn fired before the car crashed through a brick wall and landed on University Avenue.

In Monday’s press conference, Laux said he’d been told that Hartsfield did not drink, and he questioned the existence of the open beer bottle in the car, which was never found at the scene. He said Hartsfield’s death was “entirely predictable and entirely avoidable,” and he added that the lawsuit filed Monday also pertains to the LRPD’s “historic failure” to properly train police officers on conduct during police-involved shootings, specifically “how to safely conduct a traffic stop [without] excessive force or needless deadly force.” 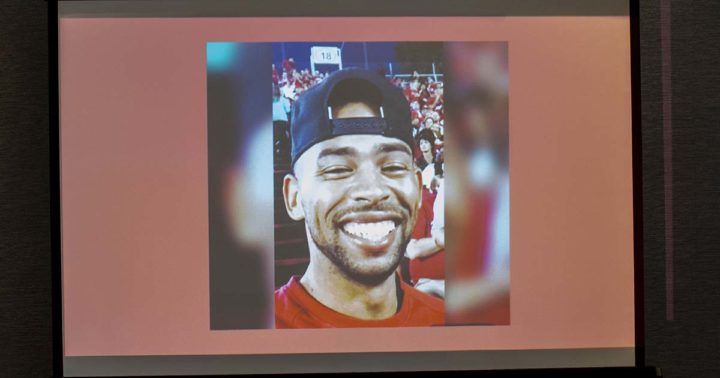 Laux cited several examples of officer misconduct during traffic stops in a presentation during the press conference, including a traffic stop conducted by LRPD Officer Kelly Morris (formerly Kelly LePore) in July 2005. Dash camera footage from the incident shows Morris pulling over a suspected drunk driver, Alexander Jones. Morris approached the car with her gun drawn and tried to pull Jones out of the car. Jones then drove away and was later shot by another officer after a car chase. Laux said Officer Morris later trained Josh Hastings, a former LRPD officer who was dismissed from the force after fatally shooting a burglary suspect in 2012.

“The line between [an] aggressive police officer and [a] gun-wielding thug can really be a thin one,” Laux said.

The Pulaski County prosecuting attorney’s office cleared Gunn of criminal wrongdoing in Hartsfield’s death in March 2018. Laux said he and Hartsfield’s family waited to file the complaint both because the case’s file “wasn’t available for many months” and because they wanted to wait until a new mayoral administration took office in Little Rock.

“To be perfectly candid, we wanted to wait for the various governmental transitions in the municipality to occur so that things didn’t get [put on the backburner] or forgotten in the transition,” Laux said. “And we wanted to know how we were going to poise this case in light of whomever that transition would produce as the mayor.” 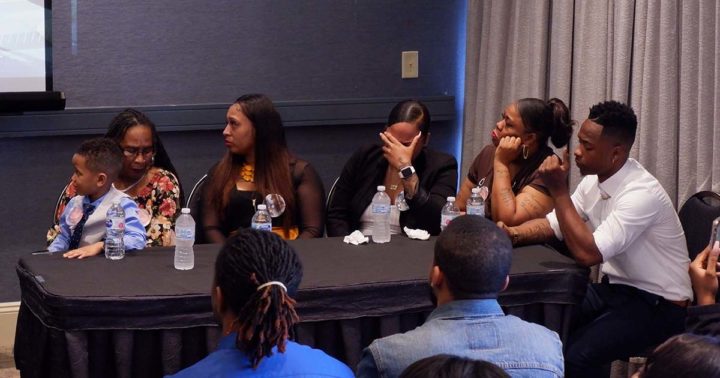 Hartsfield’s older sister, Lauren Hartsfield, and his younger sister, Natasha Hamilton, both spoke through tears of their brother’s character and his desire to be an “outstanding young black man.”

“I am now a member of a club no one wants to be a part of,” Lauren said. “Day by day, I’m taking this all in, [and] I have to trust and believe that whatever I go through, my brother is guiding me through everything. I just miss my brother. And he didn’t deserve to not be here, and this is something that they didn’t think about: how it affected us, and the fact that we have to go through our life, and we’ll never get to see him again.”

Laux said he and the family commended Police Chief Keith Humphrey’s decision to terminate Officer Charles Starks’ employment, even after he was recommended to be exonerated by police supervisors for fatally shooting Bradley Blackshire during a traffic stop in February.

In his closing remarks, Laux said he and the Hartsfield family are “challenging” Humphrey “to continue his independence [and] his level-headed decision making.”