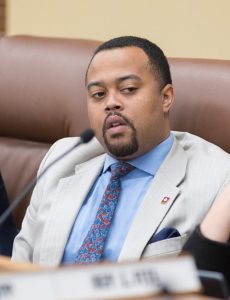 John Moritz of the Arkansas Democrat-Gazette reports that Rep. Charles Blake (D-Little Rock), the House minority leader, is resigning from the Arkansas House today “to explore other career opportunities.”

Blake, who was elected in 2014 and led a high profile but unsuccessful effort this legislative session to eliminate Civil War symbolism on the Arkansas flag, told colleagues of his decision in an e-mail and confirmed it to Moritz, but didn’t specify his future options.

Given the frequency with which he’s been seen in an office at City Hall, his closeness with Mayor Frank Scott Jr. and the vacancy of a chief of staff position on Scott’s staff, speculation is that’s where he’s heading. Just recently I inquired if Blake was already on staff and assigned the office in which he’s been spotted, but Scott’s spokesman said neither was true.

The thinking at city hall has been that Scott has held off filling his chief of staff position until the June retirement of Assistant City Manager James Jones.

A special election will be necessary to fill the vacancy in Blake’s seat.

“Minority Leader Charles Blake has made Arkansas better for all of us. In his three terms, Blake took on the hardest fights and delivered, including the unthinkable like ensuring Dr. Martin Luther King, Jr. is honored alone on the calendar. When it came to tax relief, education, and criminal justice reform, Rep. Blake could be counted on to put Arkansas first. I consider Charles a close friend and his positive demeanor and influence will be missed.”