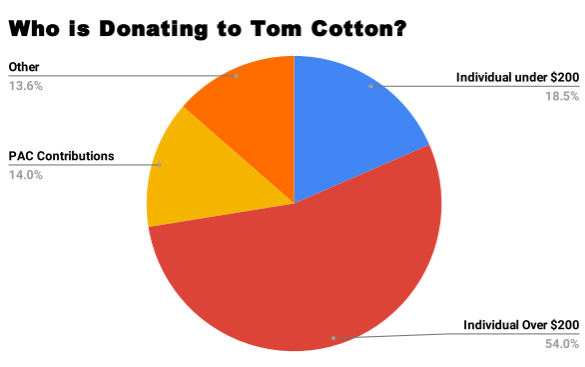 U.S. Sen. Tom Cotton’s dodging of a question about the influence of money in politics gave the Arkansas Democratic Party an opportunity to gig the Republican for his dependence on special interest money.

Does Cotton believe big money has had a corrupting influence on congressional races? He responded in an NPR interview:

“No, I don’t. We spend much less in this country on politics than we spend on potato chips or toothpaste. Often times as you see in the Democratic presidential primary, financial contributions are a way for people to support a candidate of their choice when they have too busy a life or too busy at work or have kids to be able to knock on doors or stuff envelopes or volunteer in another way.”

Are the potato chip eaters funding Tom Cotton? The Democratic Party took a look. The chart at top shows the small percentage from small donors.

An analysis of contributions since 2013 also shows more than three-fourths of Cotton’s money came from out of state. The biggest donors? Here are the top five, conservative PACs and investment companies: 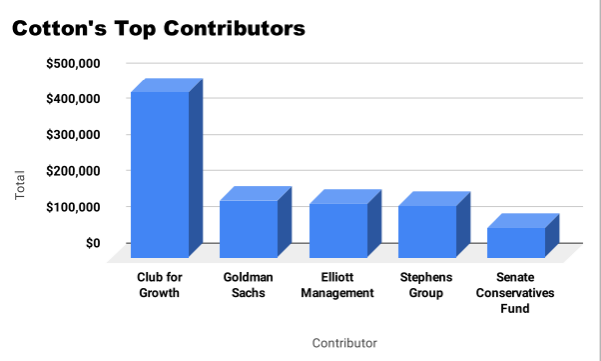 OK, sure the Dems are using this to raise money themselvrs. But rhetoric like this probably won’t encourage any check writing by the Club for Growth:

Big money in politics isn’t a problem for Tom Cotton, he loves the legal bribes he gets in campaign contributions from big banks and PACs. It means that he doesn’t have to listen to the needs of regular Arkansans who buy potato chips and toothpaste.