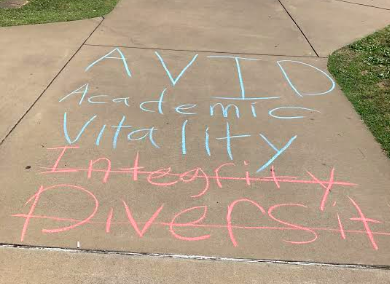 PROTEST: People unhappy about UCA President Houston Davis’ removal of a quote about being gay from a campus sign fired back today with chalked messages. This one edits a campus slogan about UCA’s supposed support for diversity

The University of Central Arkansas has belatedly admitted that president Houston Davis communicated with anti-gay Republican Sen. Jason Rapert about the takedown of a gay pride quote by Lady Gaga in front of the university library.

Back story: Davis ordered removal of a sign about gayness quoting Lady Gaga the day after the library posted it June 11. (Being gay is permanent, the quote essentially said.) It was in keeping with library practice of posting quotes relevant to current events — this one timed with Pride Month celebrated by LGBT people. Somebody complained. The president ordered the sign down. He said it was an institutional expression of opinion and a bad thing for young people on campus to see. (A statement of scientific fact is bad?) The response was fierce. Is homosexuality a matter of choice, not biology? Should gay students and faculty go into hiding when young people are on campus? Should the library not present material relevant to the time? — Malcolm X on black history month; Betty Friedan on women’s observances?

My efforts through FOI to find out who complained and how the president responded have so far been largely fruitless. Did the president really remove an innocuous sign without written orders?

Late today, a University spokesman did provide this answer to one of my specific questions. Such as, who called? Did they include a legislator? My responses from Amanda Hoelzeman of UCA include this:

We do not have any records that meet your request. President Davis did receive phone calls, but there are no records of these calls. He’s happy to meet with you and discuss the calls he received, along with the decision-making process for this matter, if you’d like to do that. I’ve included a response below to your earlier question. Please let me know if there’s anything else I can provide to you. thanks.
The response and decision has absolutely nothing to do with the personal beliefs of Houston Davis. Taking the quote down was a matter of considering whether a university sign could be used in that manner and factoring in the way we treat other similar university signs.

The spokesman insisted there was no written record of discussions. Finally, at 5;41 p.m. today, I got this response to a question about whom Davis had talked with

President Davis visited with all seven board of trustees members and Senator Jason Rapert.

I’ve asked for more detail. I’ll pass it along if I receive it. I’ll take some persuading to be dissuaded from believing the president has created a mountain out of a molehill by knuckling under, if not directly to the likes of Jason Rapert, the Republican bully of Bigelow, to the point of view he represents. (He’s said the Conway gay pride parade was meant to mock Christians.)

Sad day for UCA and President Davis. He’s created a hole the library and others can’t dig out of. Must the subject his teachers teach be shielded from outside eyes now, regardless of controversial subjects? Does Jason Rapert get a veto over campus expressions of science and literary fact? The right-wingers ought to be furious at this suppression of academic freedom. They won’t be. This is what the Raperts want. Silencing of views he doesn’t like; promotion of those he supports.

UCA will never join the first rank of Arkansas universities, never mind of the rest of the country, unless it stops bowing to demagogues like Rapert.

PS: the president alibis his talks with the Board by saying he talked with them individually, not as a group, which clearly would require public notice under state law. Supreme Court precedence frowns on round-robin discussions as a way around public meetings to reach decisions.

UPDATE: Thursday, Rapert was heard from on Facebook in an atypically brief comment praising a Democrat-Gazette editorial defending the UCA president. He wrote:

President Houston Davis and the UCA Board made the right decision. The institutional voice of UCA should not ever be hijacked by anyone for their own personal political messaging. I am happy to see the Arkansas Democrat Gazette shooting straight on this issue. I agree.

There is a process for people making statements on the UCA campus, including on signs in front of the library. They apparently weren’t followed in the case of the library sign. But there’s a good display of contextual materials INSIDE the library related to Pride Month.

Also, I think it possible we’ll find some free speech types who’ll follow rules to make public expression at UCA. Would that be “hijacking” UCA? We shall see.