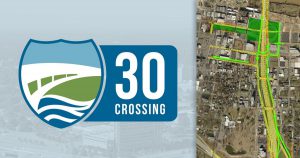 OUR BOONDOGGLE; The I-30 project.

The Public Interest Research Group’s new list of $25 billion in “highway boondoggles,” doesn’t include the I-30 concrete gully in downtown Little Rock, but the problems cited with the list echo all the problems with the $1 billion dollar boondoggle planned in Little Rock (with only half that projected cost available for construction and not a cent put aside for the new congestion it will create elsewhere).

How could you not think of the misbegotten 30 Crossing project when you read in City Lab:

Every year, local and state governments around the U.S. set their sights on big new highway projects. Some propose to build fresh six-and eight-lane regional corridors; others to add lanes and fancy interchanges to highways that already exist.

In either case, the rationales are often the same: meet the demands of growing populations, bring aging roads up to modern safety and design standards, and — almost without fail — relieve congestion. But as project bids move through the approval processes to secure coveted federal funds, something that tends to go unexamined is whether mobility needs can be met without them.

For example, the benefits of better maintaining the lanes that already exist are rarely compared to making new ones, even though it’s well documented that U.S. highways and bridges badly need repair to relieve traffic backups and improve safety. Within cities, public transit projects are also rarely considered as an alternative. And some state DOTs have begun to admit what transportation researchers have known for decades: Congestion just doesn’t get better with the addition of lanes. In fact, over the long run, it gets worse, thanks to the principle of induced demand.

A federal lawsuit alleging insufficient environmental considerations has been filed against the Little Rock project. Courts have saved us from ourselves before. Maybe they will again.