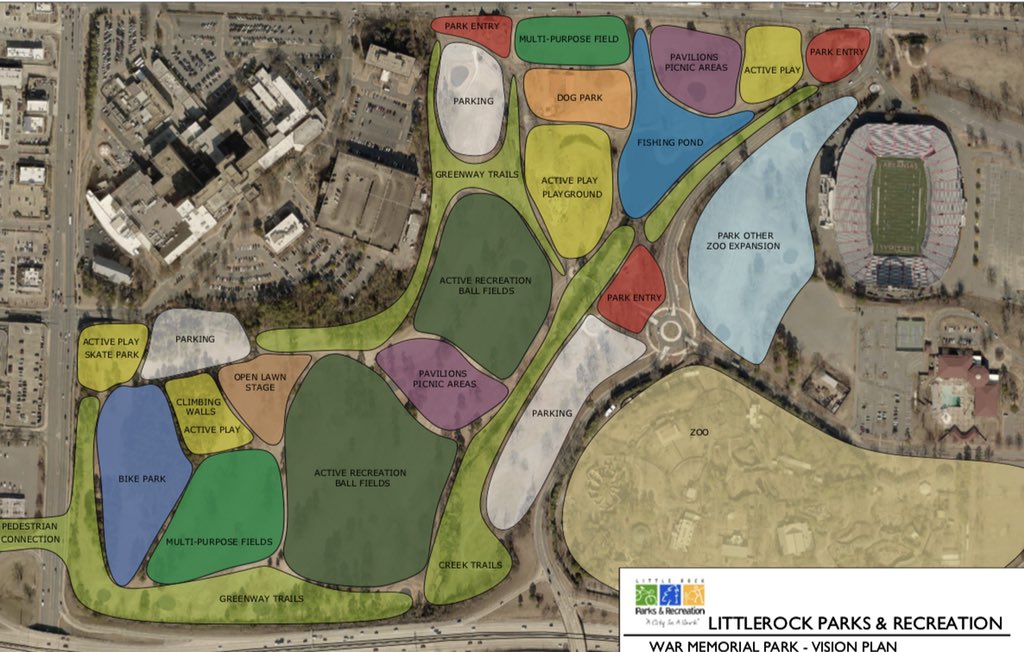 The city of Little Rock has released the results of an informal survey asking Little Rock how they’d like to see former golf courses at Hindman and War Memorial repurposed: walking and biking trails led the way.

Mayor Frank Scott Jr. has appointed a task force to consider the future of those parks. It’ll meet for the first time July 31. As Max has mentioned, the city is also sitting on unused parkland near Chenal Valley, at Markham and Bowman and the former Western Hills golf course. I hope the task force’s big ideas will include those.

Among those appointed to the task force is Suzanne Grobmyer, who leads the new Arkansas Parks and Recreation Foundation, which is taking in Walton Family Foundation money to build bike trails at state parks around Arkansas. Maybe she’ll have some ideas on philanthropic avenues to explore.

Little Rock will need new tax revenue to reshape these spaces into destination parks. But to create something world-class, in the spirit of say, Tulsa’s The Gathering Place, significant amounts of philanthropic dollars would also have to be in play.

The full release on the surveys:

LITTLE ROCK (July 19, 2019) – More than 11,000 responses were collected through an informal survey asking Little Rock residents how they would like to see former golf courses at Hindman and War Memorial parks repurposed. The top suggestions were for walking and biking trails.

Of 5,246 responses about how to repurpose the golf course at Hindman Park, 806 were for walking trails and 717 were for biking trails. Other top responses were: 690 for hiking trails; 627 for dog park and 554 for soccer fields.

Of 893 responses about how to repurpose the golf course at War Memorial Park, 1,024 were for walking trails, 818 were for dog park, 779 were for other and 692 were for biking trails.

The group will meet for the first time on July 31 at 3:30 p.m. at the Centre at University Park and will use the results of the survey to inform its recommendations.

“This task force is a strong representation of Little Rock’s diverse communities,” Mayor Scott said. “I expect them to think big and propose bold ideas as we revitalize, reimagine and reinvest in our quality of life amenities.”

John Eckart, Director of Parks and Recreation, said some groups have already begun using the parks spaces for some of the uses proposed in the survey. “With the transition away from golf, we want to encourage people to use these great park areas. Little Rock Road Runners are already meeting for group runs and the spaces are great for walking and biking or just getting away from your office for some sunshine,” he said.

Eckart also noted that the City is also working on programming for the spaces that could be implemented immediately, while the task force continues its work. “For example, we anticipate some outdoor fitness classes coming soon,” he said. Those would be run by the Jim Dailey Fitness and Aquatic Center located within War Memorial Park.